Book Reviews: When The Tide Rises 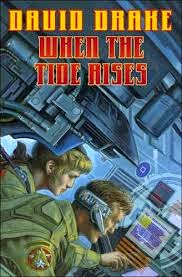 It's been over three years since I read and did a review on a "RCN Series" book by David Drake.

I've been focusing on webcomics and graphic novels for so long, I figured I'd better get back into reading a print-only book.

So I decided to see what misadventures Commander Daniel Leary and his signal officer/spy/librarian friend, Adele Mundy, get entangled with in When the Tide Rises (book #6 in the RCN Series).

In this story, David Drake borrowed from Lord Cochrane's exploits while serving in the Chilean Navy.

Leary and his ship, the Princess Cecil, are ordered to the frontier system of Bagaria, which just revolted against Cinnabar's enemy, The Alliance. The purpose of the mission is to relieve pressure from an important star system besieged by Alliance forces--and to get the well-connected and upstart Leary as far away from Cinnabar as possible.

But Daniel, with the help of his fellow "Sissies" (as the crew of the Princess Cecil call themselves), manage to inject some esprit de corps into the Bagarian "navy," foil a mutiny, uncover treachery among the Bagarian oligarchs, and finally take the fight to the Alliance.

1. The characters aren't as fleshed-out as some readers would like them to be.

2. The story arc seems repetitive.  That is:  The hero is given an impossible task (and even expected to fail), but manages to pull off a stunning victory, with awards--and more importantly, prize money--showered upon the heroes.

Yeah, when reading a series of any sort, a certain repetitiveness and character arc flat-lining may creep in.  But I still enjoyed When the Tide Rises and give a 4-star rating.  I still find the age-of-sail method of space travel to be fascinating and well thought out.  I think by not binge-reading this, or any series, may help lessen the feelings of deja vu.

Since this book is just over the half-way point of a series, my words of caution would be: Read books #1-5 first, before diving into When the Tide Rises.

Currently, there are four more books after this one, so as long as most readers enjoy David Drake's work, the RCN Series tide will continue to rise.
Posted by Ted Henkle at 7:30 AM

Count me on the fan side of the RCN series. I liked "When the Tide Rises" and wait patiently for the next book in the series.