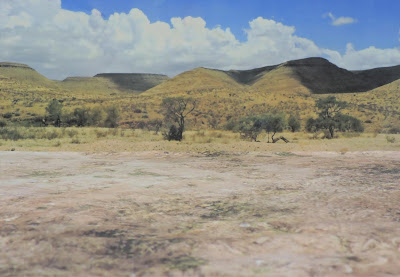 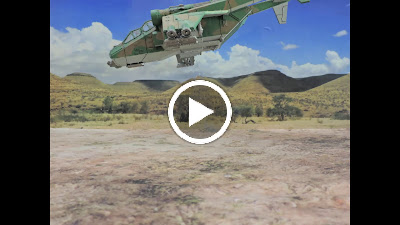 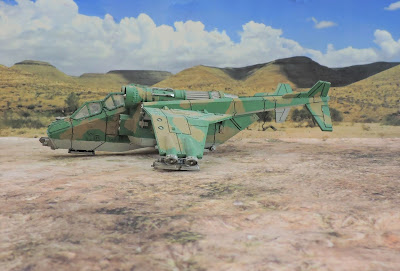 As soon as the aircraft touches-down, a squad of scout marines from the Dark Angels Chapter egress, then fan out across the arid landscape. 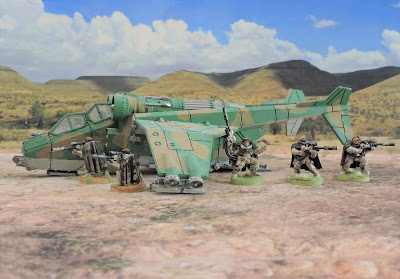 The Valkyrie takes off, leaving the scouts... 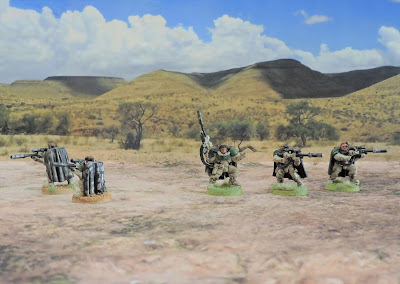 ...to accomplish their clandestine mission. 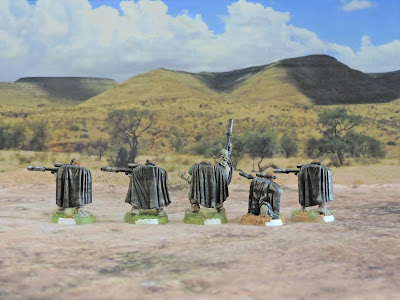 
What ever the Dark Angels Scouts are up to, I won't know for a while. And it won't be me telling their tale of derring do.

I intend to pass these on to my son-in-law.  But while I still have them, I figured I'd do a write-up.

I wasn't planning on acquiring any Space Marines in my Warhammer 40,000 (WH40K) collection, but among my on-line purchases of used figures, this guy was among them: 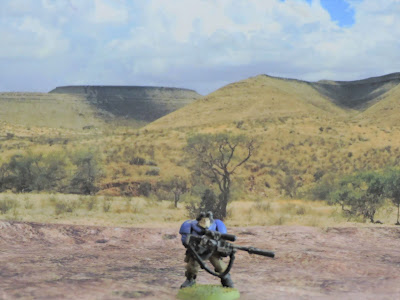 I'm not sure what Space Marine Chapter he belongs to, or if he's completely painted.

I changed my mind--sort of--when I stumbled across a handful of Dark Angels Scouts for sale on-line by Arthur Woo.  I've bought most of my used & pre-painted WH40K through Arthur, who lives in Canada and currently operates on the various Facebook Marketplaces.  He'll have a Facebook page soon, that I'll link to in upcoming WH40K posts.

When they arrived, I contacted Dan, the guy who's been painting my Astra Militarum figures, to see if he'd repaint them.

I decided on a squad/kill team of Raven Guard Scouts.  Of all the Space Marine Scouts, I liked the uniforms and mission of the Raven Guards the best.  I find the other Space Marine Scouts to be too brightly attired and kitted-out with too many close-combat weapons which appears at odds with their reconnaissance role.

Unfortunately, when Dan tried re-painting them, the figures' details were lost once the primer coat was applied to two test subjects. 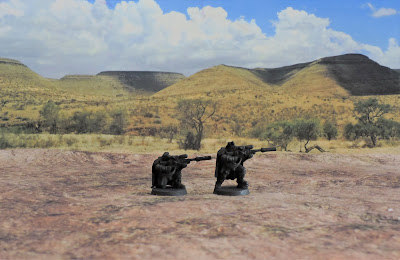 He said the figures would have to be stripped first, which would take more time--and more money.

I told him not to do anything else with the figures and leave the rest as is.

It just so happens that my son-in-law is in the initial phases of collecting a Dark Angels force.

So my purchase isn't a loss at all.

When I got the figures back I touched-up and flocked the bases.

This particular scout team consists of 5-6 members, all armed with sniper rifles.

The first figure is the squad leader: 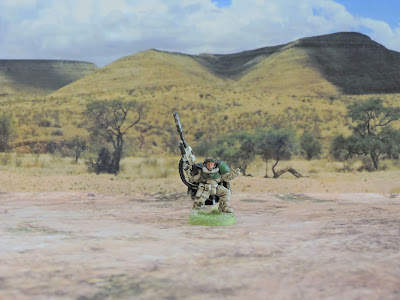 The next figure can either be the squad leader with his vision enhancement goggles down over his eyes, or the assistant squad leader: 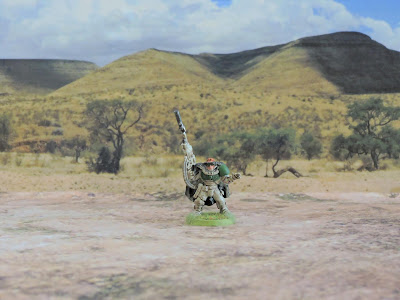 The next two figures are riflemen on sandy bases: 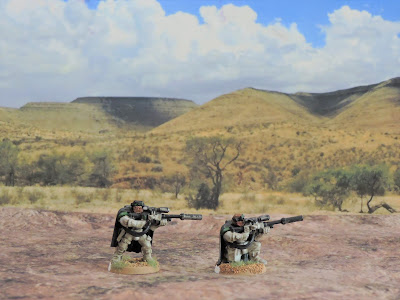 The final figures for this squad are two more riflemen on grassy bases: 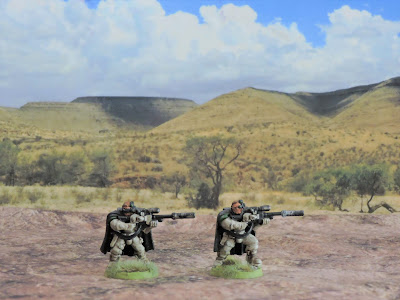 But these, along with the double-primed black figures aren't the only ones I received.

My purchase included this odd pair of riflemen: 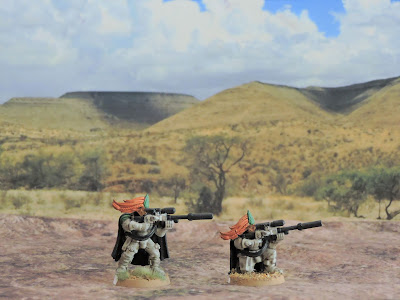 I contacted the seller and asked him who these two are suppose to be.  He said he purchased them from a third party who kit bashed two Dark Angel Scout bodies with Aeldari heads.

Well, at least they're not Drukhari.  They creep me out.

So I decided to keep the Aeldari Dark Angel Scouts, along with the blue-coated orphan scout.

I'm not sure what their backstory will be, so I'll ask around and see if anyone has ideas on how they can fit into the "...grim darkness of the far future..." 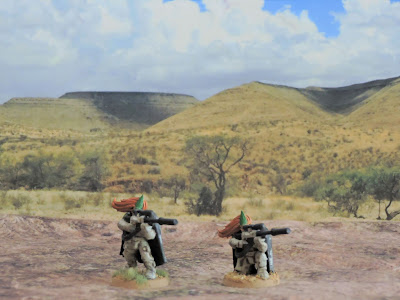 When I Go Souvenir Shopping 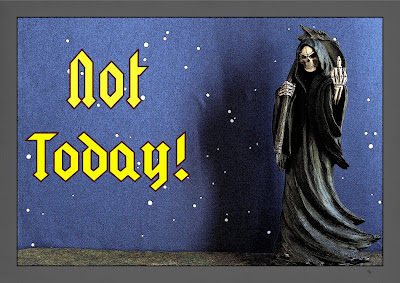 A couple months ago, my wife and I visited Granny Hazel's Candy and Gifts, which is owned and operated by family members through marriage.

My wife found cute souvenirs and toys for the grandchildren.

I found this 9-inch high statue of The Grim Reaper flipping his middle finger.

The statue's title is:  Not Today!

So I decided to make a webcomic/meme out of the title. 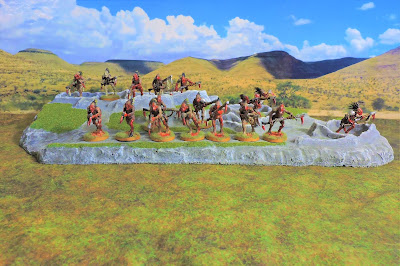 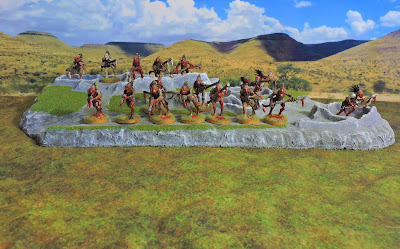 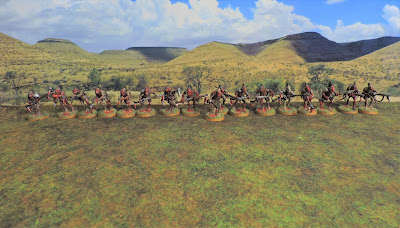 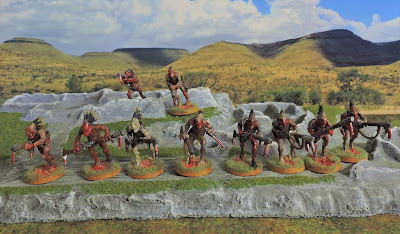 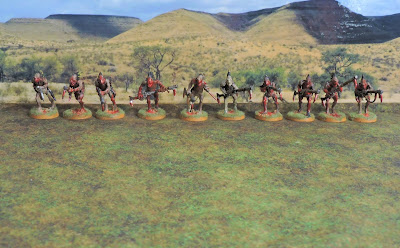