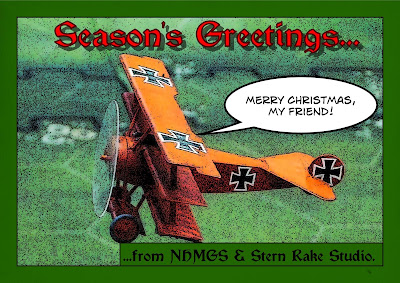 Last month, my wife and I spent Veteran's Day at The Museum of Flight.

On the way back home, one of the radio stations already started playing Christmas music.  One of the tunes that popped-up was Snoopy's Christmas vs. the Red Baron by The Royal Guardsmen.

I was surprised to discover my wife never heard of it.  I remember having a 45 RPM record of it and playing it constantly during the Christmas Season.

This inspired me to concoct one of my e-greeting cards for the year.  The picture is from an air war game during last year's Enfilade Convention.

I scrolled through my picture files for other images I could convert to a greeting card.  The only other picture that struck my fancy was this image from the same file of my friend Dean's First Battle of St Albans game. 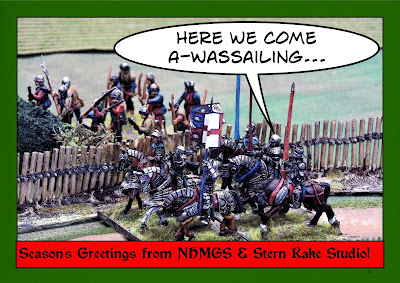 Now it is a bit anachronistic, because the carol, Here We Come A-wassailing, wasn't composed until 1850.  But I I thought it'd be funny to have this band of knights signing a "road trip" Christmas carol, instead of some bloodthirsty fight-song.

And finally, here's a picture of my siblings and I.  Despite the fact it was taken during our mom's funeral I love this picture, especially since it was the last time we've all been able to get together. 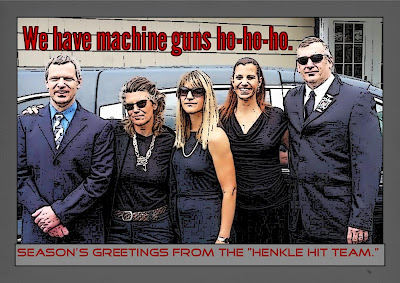 Since we looked like a team of professionals, I thought paraphrasing a line from Die Hard would make a great opening line.

Best wishes to all of you this Christmas Season and throughout the New Year!