I spent the first four years of my active duty US Air Force career as an electronic warfare technician.  My job was to maintain the electronic countermeasures (ECM) equipment on B-52s.  After a few years of removing and replacing black boxes, I realized I wasn't enthused about being a fix-it man.
I'm still not--even when it comes to painting miniatures.
I wanted to cross-train into a more combat-orientated career field.
And boy, did I get my wish.
I ended up becoming a member of the US Air Force's Tactical Air Control Party (TACP) group.
So I spent the remaining 16 years of my military service working with US Army headquarters and combat units helping to coordinate and direct Close Air Support (CAS) and Forward Air Control during exercises and actual deployments.
TACPs aren't just skilled at calling-in air strikes.  They're knowledgeable about an array of joint fire support, such as; US Army Forward Observers who perform with artillery fire, and Naval Gunfire Officers with ship-to-shore fire support.  (The US Marines have a similar group called ANGLICOs--Air Naval Gunfire Liaison Company).
We're a tight-knit group and still keep in touch through social media.
Fast forward to a few years ago, and my son-in-law got me interested in Warhammer 4,000 (WH40K).
I delved into the game by purchasing earlier editions of the core rulebook and the codices.  I developed an affinity towards the Astra Militarum, and raised company-sized element of my own regiment, the 187th Dragoon Regiment (Composite).
(I still have an entire troop/company to do a blog post on.  But due to health reasons I haven't been able to conduct a large photo shoot yet).
A couple years ago, I asked my friend Peter to paint a command squad for me, but reconfigure it as a TACP.  He finished them early last year, and I've finally gotten around to posting my homage to TACPs past & present.
Somewhere on the Sector Fronteris... 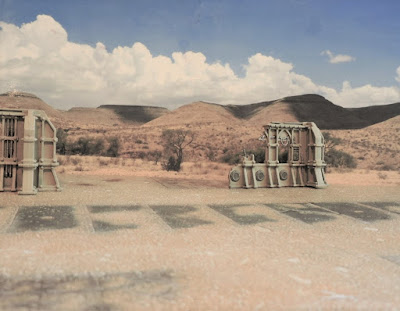 ...an unusually configured Chimera rumbles into a ruined outpost. 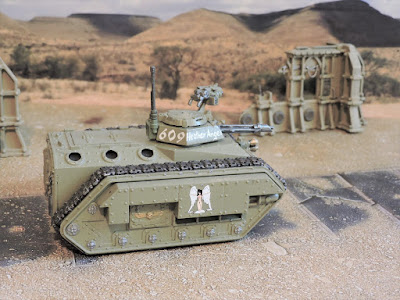 Side Note:
I bought this model pre-painted and assembled.  It's been so long, that I can't remember who I got it from.
TACPs support every type of Army combat unit.  For those assigned to armored, mechanized infantry, or armored cavalry units, they often have their own Armored Personnel Carrier (APC), or "track" as we liked to call them.
I thought this particular Chimera, with it's risque nose art  would be the most suitable in my collection for my TACP.
Now back to the opening scene... 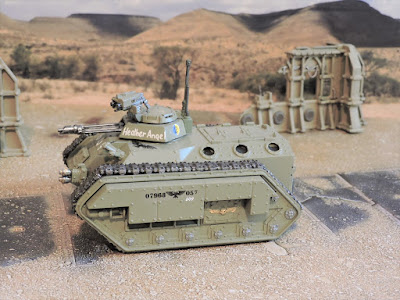 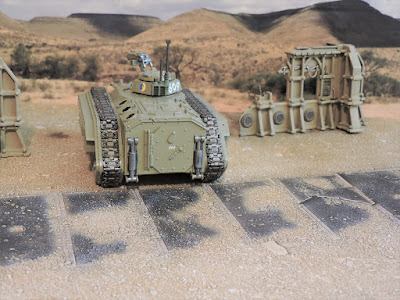 A 5-man team of an Astra Militarum TACP disembark. 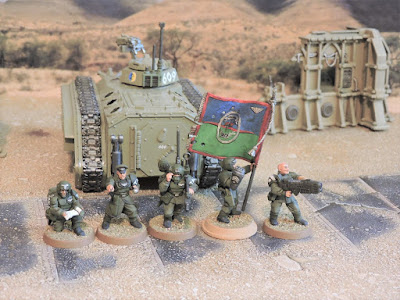 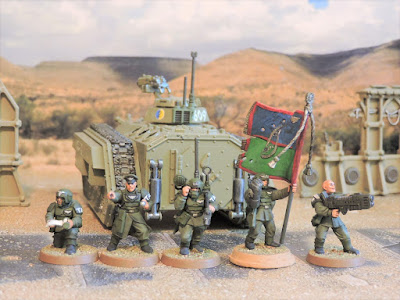 As the Chimera moves off to perform a perimeter security check, (and for readers to get a better view of the figures), the TACPs establish an observation point (OP). 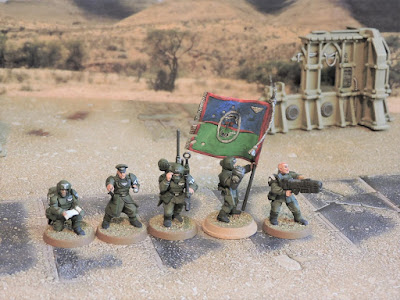 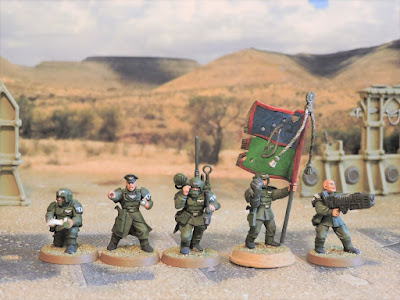 Now for a more detailed look at my WH4K version of a TACP, here's a side-view profile: 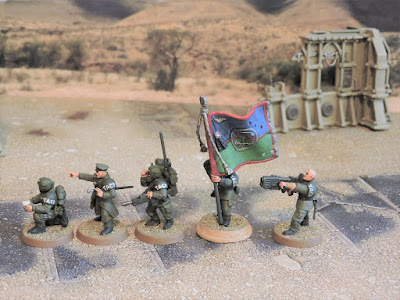 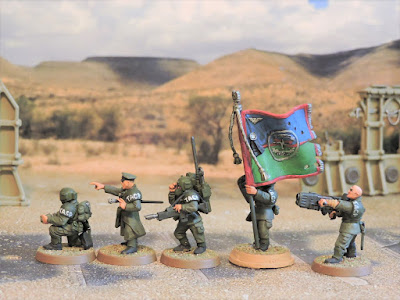 Peter did a remarkable job on the figures and especially with the TACP flag.
Now here's a look at the individual figures, and their functions within the TACP. (Note:  "TACP" can also refer to an individual as well as a team).
The Air and Artillery Support Officer (a combination of Master of Ordnance and Officer of the Fleet): 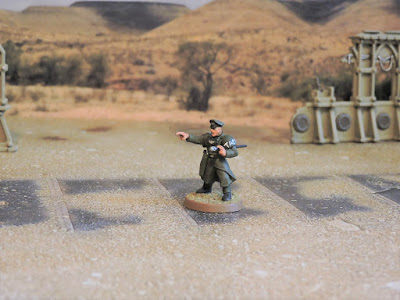 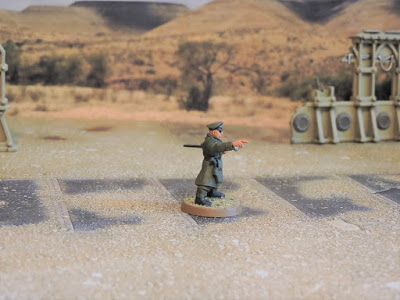 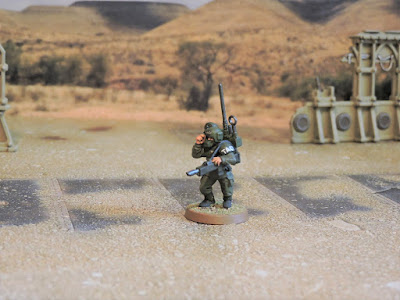 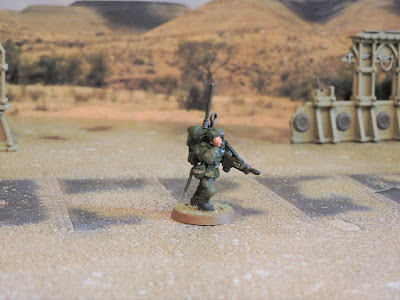 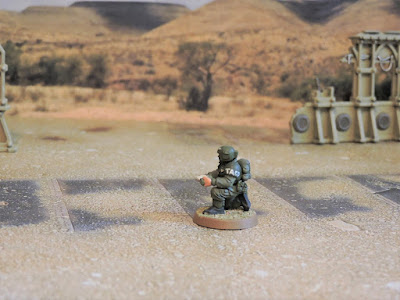 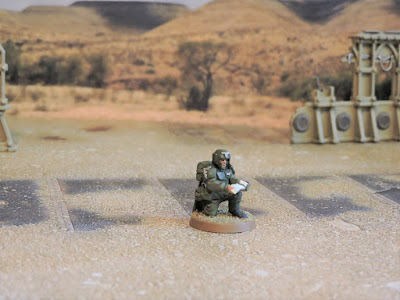 A JTAC is an enlisted member performing the same functions as Air and Artillery Support Officer.  This will allow the team to split up if necessary in order to service two targets, and also provides back-up when if either become a casualty.
The Target Designator/Heavy Weapons Specialist: 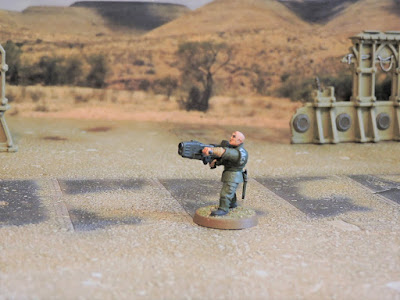 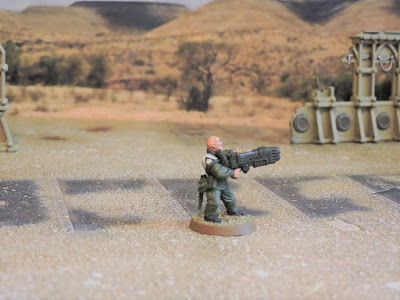 I have this figure armed with a plasma gun to be used at designating targets, by illuminating them with plasma fire, and to provide heavy weapon support to the TACP.
The TACP Standard Bearer: 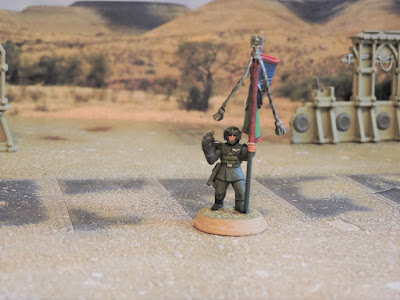 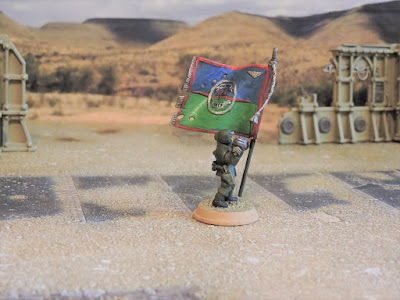 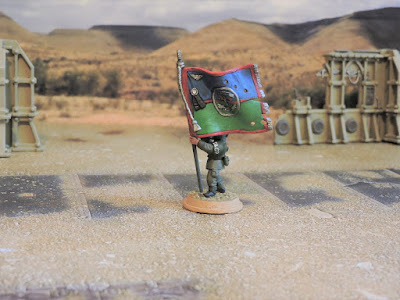 TACPs, and every other combat unit here in the Second Millennium, don't wave standards around in the heat of battle.
But the figure and flag are too cool to pass up. 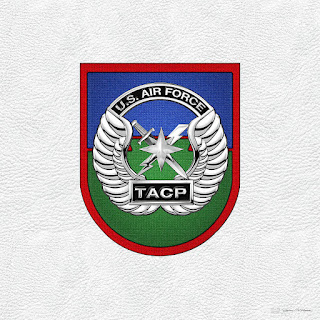