I got into Star Fleet Battles (SFB) right when it was first published in "pocket games."  I moved on to Federation Commander a few years ago, but still have a lot of SFB stuff, along with other Amarillo Design Bureau (ADB) material.

The good folks at ADB have made a great use of such tropes for SFB throughout the years, primarily Space Is An Ocean, to give players a plethora of Standard Sci-Fi Fleets.

Despite being a long running tabletop game, the one thing I never bought all these years were ship miniatures, for my own Standard Sci-Fi Fleet.

So when my friend Dan was preparing to move, he offered to sell me his starship collection, I found it impossible to say "no."

Every figure pictured below was painted by Dan.

My contribution to this photo-op was providing the star field mat from Monday Knight Productions.


The Gorn Hegemony (a.k.a. the Reptilians)

The Orion Syndicate (a.k.a. Space Pirates and The Syndicate)


The Hydran Kingdom (a.k.a. Starfish Aliens)


The Andromedan Invaders (a.k.a. The Greys? Or maybe Little Green Men on steroids? Who knows?)

I'm not sure what this ship is, but it was in Dan's collection... 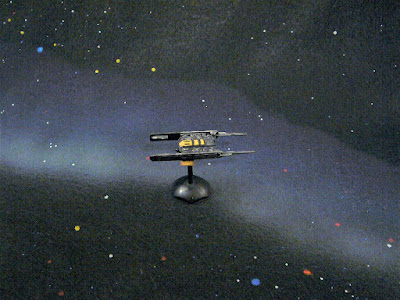 The Lyran Empire (a.k.a. Cat Folk)


The Kzinti Hegemony   (a.k.a. another breed of Cat Folk)

In addition being able to unleash a Macross Missile Massacre against their non-feline foes with their drones (missiles), the Kzinti pioneered the use of attack shuttles to provide players with Old School Dogfights.
Thanks to Dan, I now have at least one ship from nearly every race in the SFB 'verse.

The only vessels I don't have, for now, are Tholians (Insectoid-like Aliens) in which to ensnare trespassers...

I use to dress like Indiana Jones.  I still have my outfit, similar to the cosplayer pictured above.  We both agreed the "Indy look" is better with the leather jacket.  More often than not though, it's way too hot to wear, unless it's some con-at-the park in late fall.

I still have my basic Indiana Jones outfit.  I'll probably wear it again, maybe in time for the upcoming fifth film, once I acquire some vintage-looking accessories that don't disrupt the look of the costume.

But, until Indy-5 hits the theaters, I'll continue attending cons in my "lazy man's Punisher" outfit.

One group of cosplayers dressed as DC Comics heroes and villains asked me to pose with them.  Since I was sort-of dressed as a Marvel Comics, you could say we formed our own crossover photo.

Otherwise, because of the time-crunch I've mentioned in the previous ECCC posts, I felt camera shy and didn't take any selfies with cosplayers or artists.

Maybe it was my own imagination, but I got the impression some (many?/all?) of my fellow attendees felt as rushed as I did and weren't in the mood to be waylaid by a pesky amateur photographer.

Whether this is true or not, I only took a handful of photos during my fly-by.

Here's my Cast of Cosplayers (most with character links below the images):


I actually saw two Rorschach's.  One was taller and thinner than the one I took a picture of.

There were even some non-human cosplayers...

Before I come to the last cosplayer I accosted snapped a photo of, I want to point out something I noticed during my short stay at this year's ECCC.

This was the first time I noticed couples consisting of a cosplay gal with a non-cosplaying guy.  I'm under the possibly false impression this usually isn't the case.  Prior to this con I've seen couples where both or neither are cosplayers; or the guy's in costume while the gal isn't.

Now I'm not saying this is a sudden phenomena, just the first time I truly noticed it.  And I'm sure there's all sorts of logical explanations for this, including my imagination.

I wanted to take pictures of some of these coupled, cosplaying women but felt reluctant to do so.

It seemed as if these guys were with were either:

a). Stoically supporting their sweetheart's hobby, or

b). Felt like they were being dragged through every women's apparel shop in the Mall of America, while the Big Game was being televised.

Since I couldn't tell, I didn't want to disrupt any delicate dynamic--even if I was imagining the whole thing.

I did make one exception though.

As I rounded a remote corner of Artist Alley, I nearly collided with Lady Punisher and her non-cosplaying boyfriend (husband?).  Since we were dressed alike, it was easy for me to break the ice and ask if she wouldn't mind posing for me.

I was tempted to overcome my camera shyness and get a picture of he both of us, but I didn't want to "overstay my welcome." 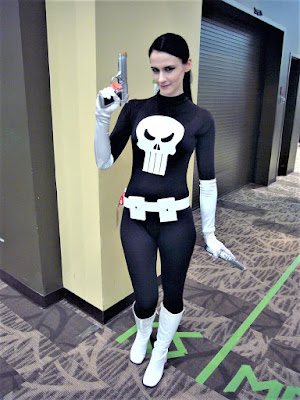 So that's it folks, a short & sweet synopsis of my partial day at the 15th Anniversary of the Emerald City Comicon.

Thank you to all the cosplayers for your patience while allowing me to photograph you.  Best wishes to you in all your cosplay activities and convention ventures.
Posted by Ted Henkle at 6:00 AM 2 comments:

Even though my one-day venture during the Emerald City Comicon (ECCC) was more of a supersonic fly-by, I managed to take a few pictures of the artists and vendors that caught my attention.

Weta Workshop had one of the largest displays at the con.


I came across two ECCC Merchandise stands during my walkabout.  This one in front of the Main Showroom, didn't have too long of a line...

...but the smaller one in Artist Alley had less than half a dozen people waiting to be served.  I certainly didn't want to pass-up the opportunity a short merchandise line presented, and I was able to place my order as soon as I weaved my way to the cashier.

I picked up a new Punisher t-shirt... 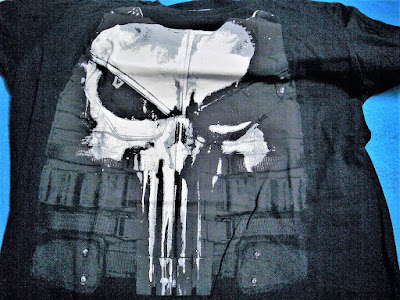 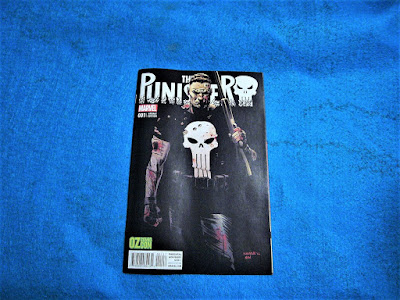 The cashier asked me if I was excited about the The Punisher TV series.  To my chigrin, I told her this was the first I've heard of it.

I guess I should do some homework before venturing out to conventions in order to maintain my "geek cred."

Anyway, once I got the ECCC merchandise I wanted, I set off to annoy chat with some of the artists I know--and maybe even buy something from them.  (Note:  In my case, "know" means I've met an artist once, or twice).

I've run into Rebecca Hicks, author of Little Vampires, at just about every con I've managed to attend.  So I always make it a point to stop by her booth and say hi.

Her and her husband were nice enough to pose for a picture, even though I couldn't find anything this year to buy from them.

Brad Guigar has a few projects going on and several products available, but he always takes the time to talk to fans. 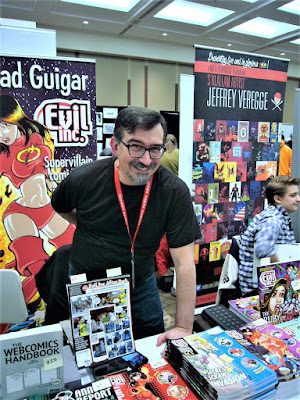 He maintains a "how-to" site about making and maintaining webcomics called--well--Webcomics.com.

His current long-form comic is Evil Inc., about a super-villain corporation.  He's working through Patreon to fund his Evil Inc. venture, along with commission work ranging from family-friendly to NSFW.

Brad is also directly associated with ECCC through his collaboration with Tales from the Con.  If you attend comic book conventions regularly, you may end up living-out a scene described in Tales of the Con, which was available in book-form from the ECCC Merchandise Booth.

I was in such a rush trying to get to the con on time, that I forgot to peruse through my collection to ensure I don't by any duplicates.  Lately, I've been buying duplicate gaming items, which require a second trip back to the store to return them.

With Brad's help, I was able to figure out how many Evil Inc. volumes I already had, and which I could safely buy.


Ron Randall is another artist I like to pester talk to.  He's enjoys meeting with fans, even ones like me already suffering from "con-fatigue."  (See my supersonic fly-by post about my mental state).

While he was autographing the latest two Trekker books, I noticed Ron was a collaborator for Future Quest.  So we ended up talking about our mutual love of the best animated series ever--Jonny Quest. 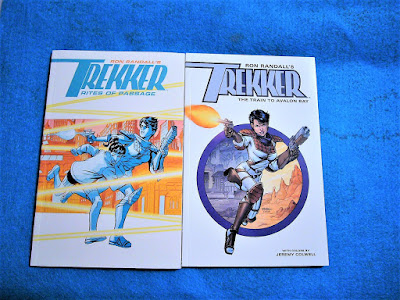 Since I bought two of his Trekker books, Ron threw in his artist sketch book for free. 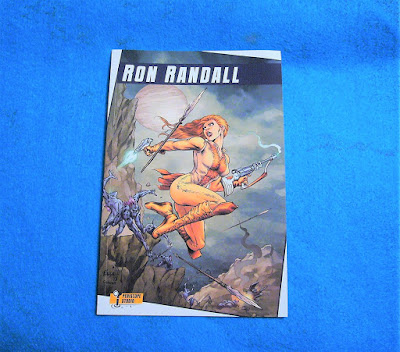 When I go on a shopping spree at events like ECCC, I try to keep an eye out for items friends or family members may like.

Last year, a coworker lent me Watchmen to read, in order to compare to novel to the film.  While my knowledge of both Watchmen mediums is still limited, this crappy copy caught my eye.

I asked Nicole Goux, one of the collaborators, about their version.  She said it was their homage to the original source material and attempt to analyze the artistic style of the book using their own drawings. 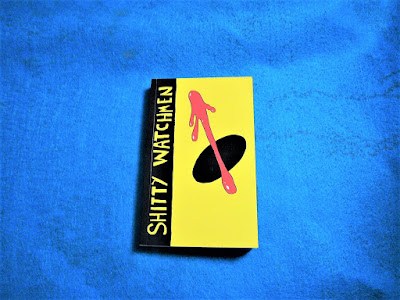 Despite the title, my coworker appreciated getting a nicely autographed copy of Shitty Watchmen.

I saw the following artists in-passing, but didn't get a chance to loiter around swing by their booths:

I wasn't planning on buying as many graphic novels as I did.  My original plan was to focus on getting game material.

There were several gaming areas at this year's ECCC, but I didn't have time to sit down and play any of them, even the ones who were offering prizes if you win.

I browsed through a few of the vendor stands, but only bought a few supplement card packs from the Flying Frog Productions booth.  The staff were very friendly and helpful, especially in helping me figure out what I may have already purchased. 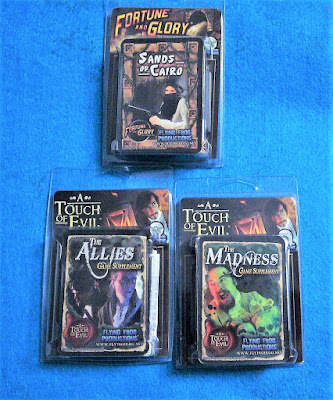 When I finally got around to going through my books and games, I was relieved to discover I didn't buy any duplicates of anything.

Next time I attend, I'll try to remember to write a list of already-owned material.

The final chapter in my ECCC-2017 Trilogy will be on the cosplayers.

Stay tuned!
Posted by Ted Henkle at 7:30 AM No comments: