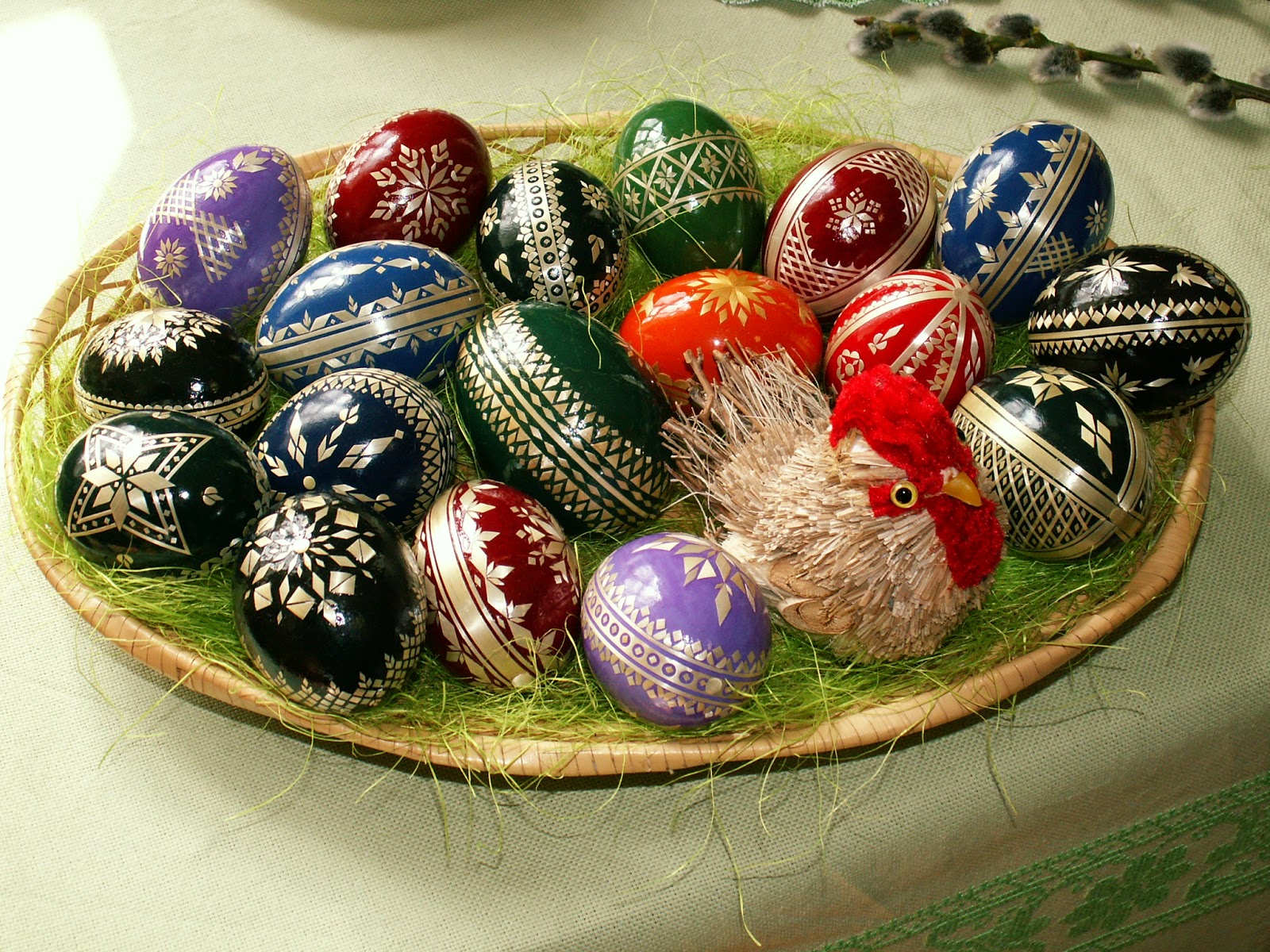 Posted by Ted Henkle at 9:38 AM No comments: 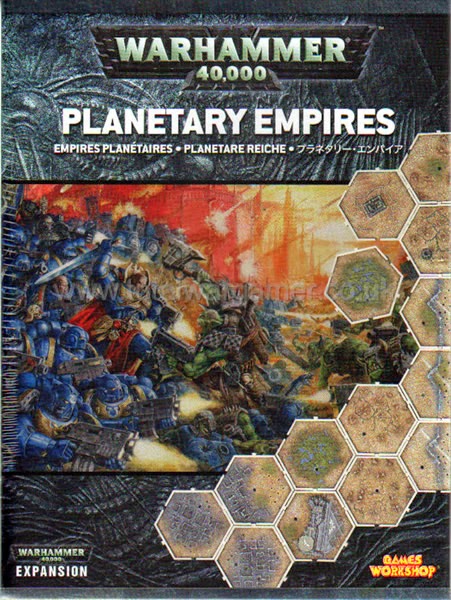 A year or so ago, my wife's son gave me a gift card to a nearby Games Workshop store.  At the time I wasn't planning on getting into Warhammer 40,000 (WH 40k), but I've always been fascinated with miniature campaigns.   So when I got around to actually visiting the store, used the gift card to defray the cost of Planetary Empires.
I like the modular, hexagon terrain tiles, which allows for a myriad of unique combinations. 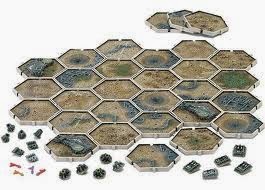 So the following payday, I bought Mighty Empires, assuming I could utilize both sets of tiles as long as I don't mix up the sci-fi and fantasy-specific terrain too badly. 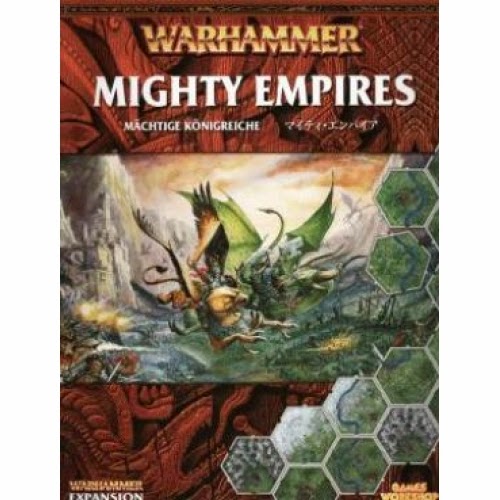 Like I said though, that was almost two years ago.  The only thing I did back then was snip-off the hexagon tiles, buildings and campaign flags from the plastic sprues.
Then my WH40k campaign project went dormant until this past weekend.
The weather was nice and more importantly, I had the day off.  So I set up one of my card tables in the driveway, got my "Mighty Planetary Empires" boxes, laid out as many hex tiles as I could and sprayed them with black primer.  Most of the tiles are double-sided, so I had to rotate my work as the recently sprayed sides dried.  Fortunately, this took less than two hours.
I usually wait to do my prime-coat painting when the weather warms up to about 60 degrees Fahrenheit (just over 15.5 degrees Celsius).  Since I don't like paint fumes, I do all my primer spray painting outside.  I've found that if I do this when it's chilly, or less than 60 degrees, the primer doesn't adhere to the surface that well.  It's probably my ineptitude at painting, but I'm curious if any other gamers have had this trouble.
My next step in this project is to paint the tiles in appropriate terrain colors.  I plan to accomplish this using an assembly-line technique.  That is, round up tiles I intend to do-up in a specific terrain; like grassland, or desert; and spray paint them in the base color.  Then I'll add the detail colors later.  (Or maybe I can get my artistically-inclined daughter to do it).
The quality of both Planetary Empires and Mighty Empires is top-notch and I'm happy with the purchases I made a couple years ago.   I only have two quibbles with Planetary Empires:
First, all the starports are emblazoned with the Imperial Eagle of the Imperium of Man... 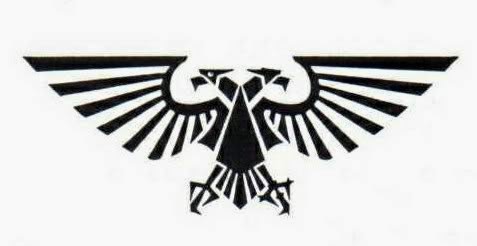 I would have preferred the starports to be more generic, so they can be owned by any race, without having to go through the trouble of filing-down or at least covering up the bird.
Second, while Planetary Empires comes with an assortment of structures like command bunkers, factories, etc., it doesn't include a single Hive City. These megatropolises are often critical objectives in WH 40k campaigns. 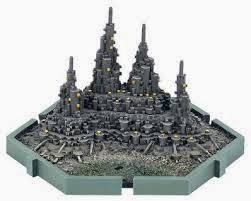 So I'm rather surprised that the only way WH40k players can add a hive city is to order one direct from Games Workshop, instead of going to the local game store.  The good news is though, they're only $10 (not including shipping and handling); and you can probably get by with just one.
Speaking of price, both Planetary Empires and Mighty Empires cost about $50.  Heresy Online had a short discussion two years ago on whether or not Planetary Empires was worth buying and offered some cost-cutting alternatives.
As I mentioned earlier, I wasn't planning on delving into WH40k two years ago.  I bought Planetary & Mighty Empires to use for other sci-fi and fantasy gaming, so the versatility of these products was worth the price.
Whether I purchase a hive city or not, I'll eventually post my final painting results--especially if my daughter does the work.
Posted by Ted Henkle at 7:30 PM No comments:

I'm sorry folks for the last-minute notice, but my agency has been busy dealing with a mudslide that occurred two weeks ago.  So I won't be able to participate in this year's game-o-rama.

But for those of you who can get involved, here's the link to Tabletop Day's homepage.

Good luck and have fun!
Posted by Ted Henkle at 2:10 AM No comments: 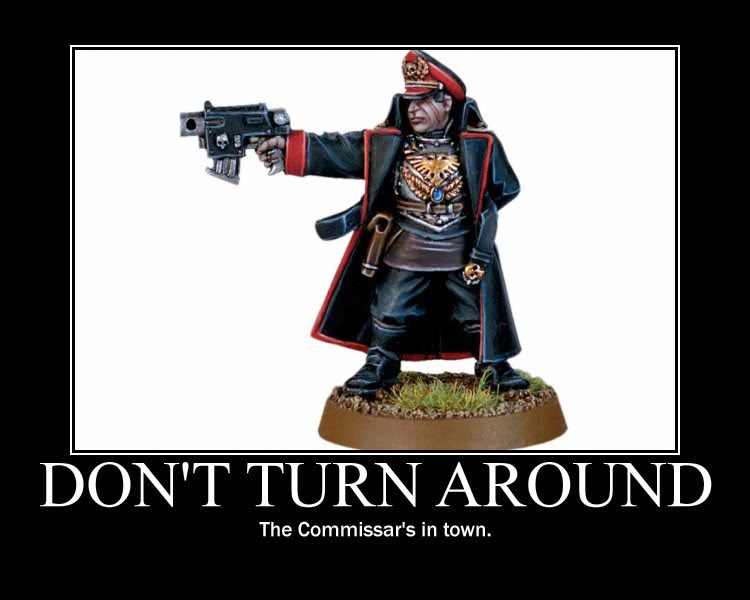 Now that I'm finished reading the Warhammer 40k rulebooks, I've started on the "Codex" books.  These are supplements pertaining to specific races, or units in the 41st Millennium.

The other day I heard Der Kommissar by After the Fire on the radio the other day.  Now that I'm immersing myself in the 40k 'verse it was easy for me to associate the song with emperor's minions.

The creator of this demotivational poster, found on the Warhammer Empire Forum, must have had the song in mind too.
Posted by Ted Henkle at 4:30 AM 2 comments: