Since I often don’t have the time, talent, or patience to paint miniature figures, I’m a sucker for pre-painted terrain.

A few months ago, I was at the Crossroads Bellevue and stumbled across Uncle's Games for the first time.

One of the items I purchased was the Galactic Warzones Power Generator... 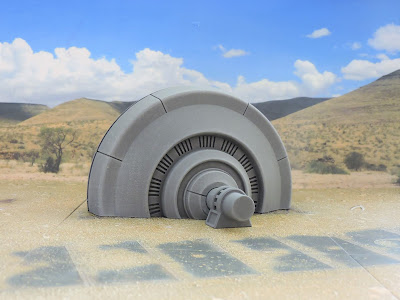 ...which is part of Gale Force 9’s Battlefield in a Box, Galactic Warzones line. 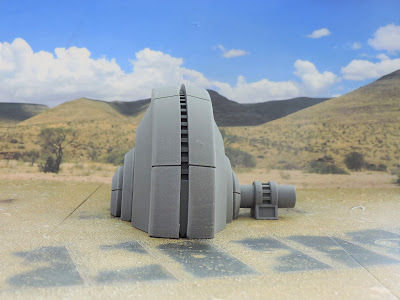 The color, weight, and texture a outstanding.  My only “issue” with this piece is that if you want to recreate the Battle of Hoth, and include the targeted shield generators, you’ll need to buy three more sets.  At about $29.25 per set, this will truly be a “high value asset.”

For other gaming scenarios though, a single shield/power generator will be fine.

But even one high value asset needs to be guarded and protected.

A few months ago, I had some Warhammer 40,000 (WH40K) quad-autocannons painted by my friend Dan. 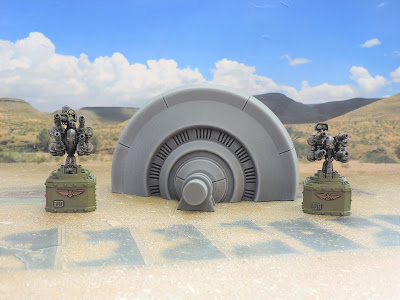 These pieces are part of the Imperium’s  Aegis Defense Line. 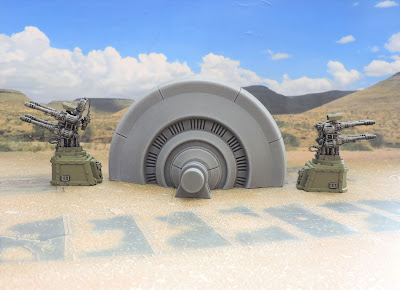 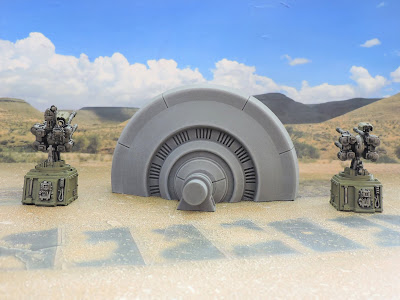 The Aegis Defense Line set comes with one quad-autocannon, four long, crenelated barricades and four short barricades. Below is a picture of two long barricades I purchased at a gaming swap meet: 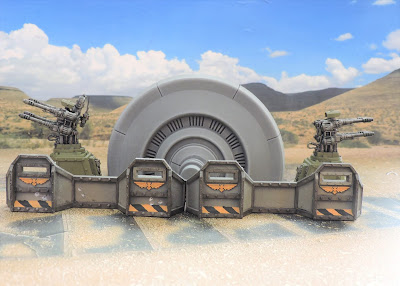 Here’s a look at two identically painted, short barricades along with some obstacles: 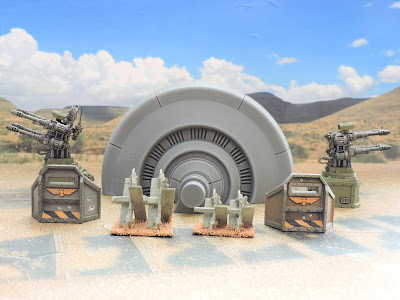 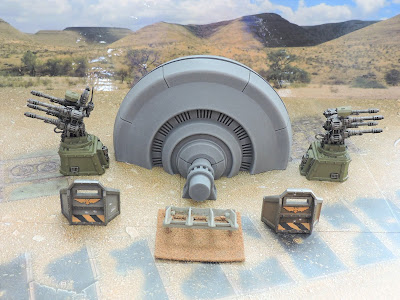 I purchased a couple unassembled and unpainted Aegis Defense Line sets.  While Dan assembled and painted the auto-cannons, I tried my hand at painting the barricades.  Here’s a couple of examples of a desert barricade: 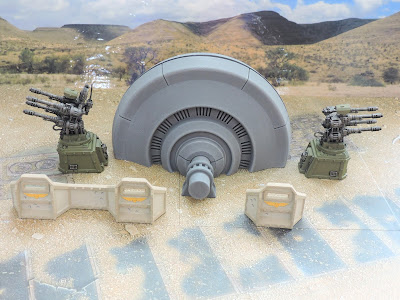 And a couple examples of a forest/grassland barricade: 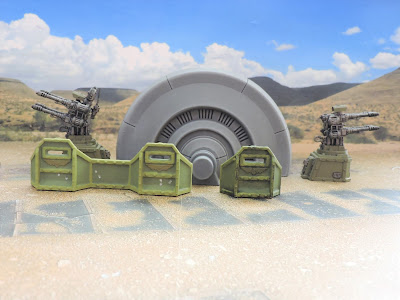 Here’s a look at the back of typical barricades: 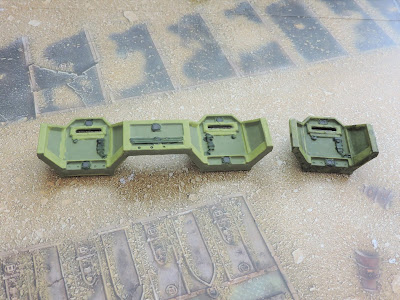 When it comes to sci-fi gaming, I don’t limit myself to WH40K.  While I haven’t invested (yet) into Star Wars: Legion, I bought a couple sets of the Barricades Pack. 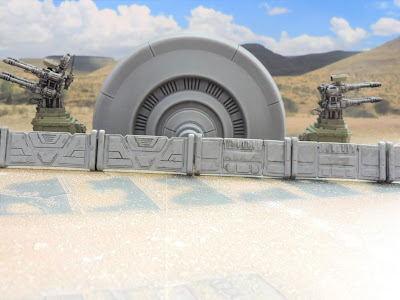 Since I’m too lazy don’t have the time to prime and paint these pieces, I simply brushed them with a grey ink-wash to give them a greasy, dirty weathered look: 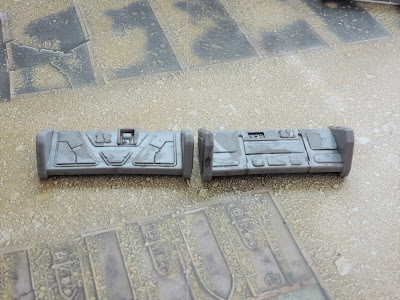 I’m a regular patron of The Miniature Page.  This site offers free shipping for orders of $99 or more.
So to take advantage of this deal, I often top-off my orders with purchases of their Tiny Terrain Line.
In this case, both damaged and undamaged Sci-Fi Walls... 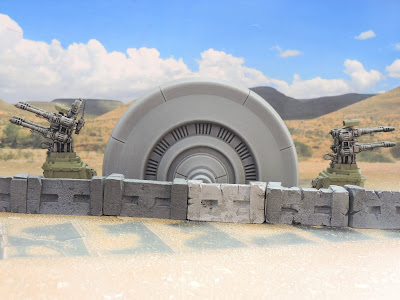 ...along with the more mundane Jersey Barriers (only one style of damaged barriers seem to be currently available). 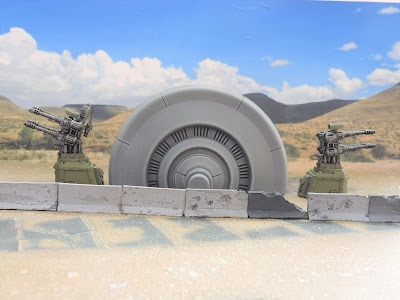 For impromptu barricades, there’s various piles of sandbags (currently out of stock): 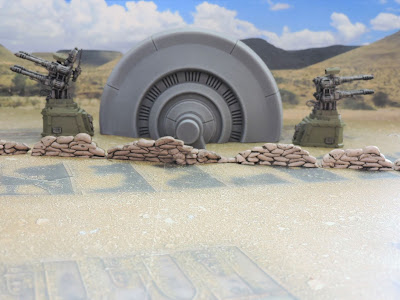 While Tiny Terrain figures are inexpensive, I found the hard plastic made them hard to paint.  I tried ink-washing the Sci-fi Walls and the Jersey Barriers, but the fluid just beaded up and ran off the surfaces.  I had better luck applying brown wash on to the sandbag piles.

In addition to plastic, painted or otherwise, there’s also paper terrain the you can download. 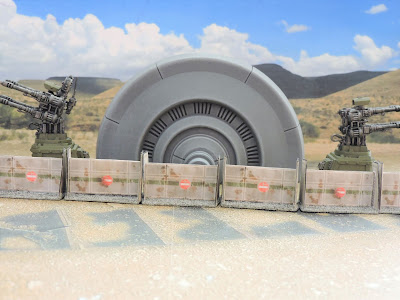 I believe I got these from DriveThruRPG several years ago, but the set is no longer available.

The site Paper Make It! has some 3D Models available for download, costing between $2.50--$5.90, along with an assortment of various science fiction-themed materials.

So while we're all "barricaded" in our homes due to the Coronavirus Pandemic Stay-At-Home decrees; we can order, assemble and paint our miniature barricades to protect our critical terrain pieces on the tabletop.

Pass in Review: The "Xenochamnids"


Science fiction is full of stories, and gaming Fluff about hordes of ravenous beasties slaughtering every living thing in sight.

First there was the Alien franchise, and the horrific, jet-black xenomorphs.

I've been a fan ever since I saw the first two movies, especially the second film. 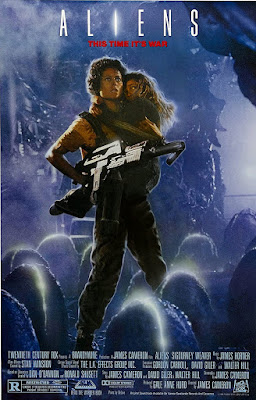 ...with two of the most popular adventures:  The Chamax Plague/Horde (in Double Adventure #5)...


...where adventurers are confronted with a swarm of voracious critters.

And finally, as I became a "cynical fan" of Warhammer 40K (40K), I was introduced to the Tyranids... 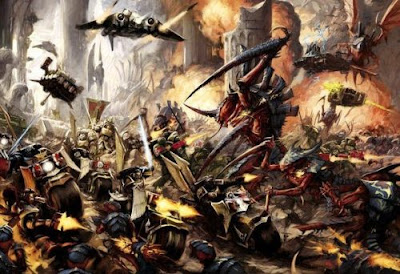 ...the "great devourers" in the grimdark of the 40th Millennia.

I like the idea of pitting a band in Kill Team, Traveller, or Wrath & Glory, against an endless swarm of 'Nid-like creatures.

Unfortunately, I'm too lazy I don't have the time to paint-up a bunch of alien beasties, and painted collections of actual Tyranids were either rare, or expensive.

I was about to give up on the idea of amassing a swarm.  But a few years ago I ventured in to Merlyn's and came across a bag of Aliens vs. Colonial Marines by Diamond Select Toys.


These figures are in the same vein as Green Army Men.

That is, they're made of soft plastic, but in two colors:  Black for the xenomorphs and green for the Colonial Marines.

When I got home from that trip, the first thing I did after unpacking was to order three more bags through Amazon.com.

My "cunning plan" is that I can use these xenomorph figures for other science-fiction wargames and RPGs, in addition to having them count as Tyranids in WH40K games and RPGs.

I also own a copy of the out-of-print game Bug Hunter (Sniper Companion #3)... 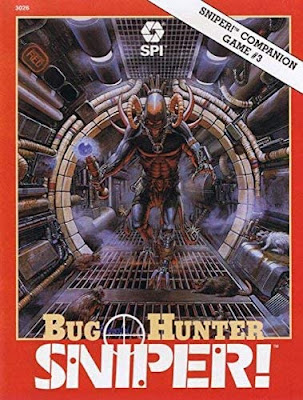 ...which I think could be converted to miniature use by replacing "hexes" with "inches."

Since the these figures will be Multiverse creatures, I concocted a composite name for them:


Once I received my additional packages, I flocked the bases of the creatures I plan on using with either sand, or gravel, and a few with grass.  This helped highlight their black bodies.

I have about 60 figures, but for simplicity, only the figures with sand-flocked bases, matching the Sector Fronteris terrain board, will be shown.

The Xenochamnids come in four poses.

The first pose is of a group of creatures kneeling before their Queen.  For game purposes, these will be the Runners (Dog Aliens). 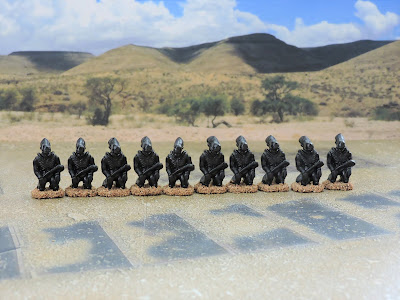 Here's a close up of some Runners: 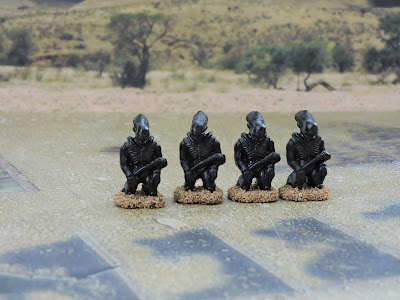 The three other types are in upright poses.

Here's the next group--"striding" creatures: 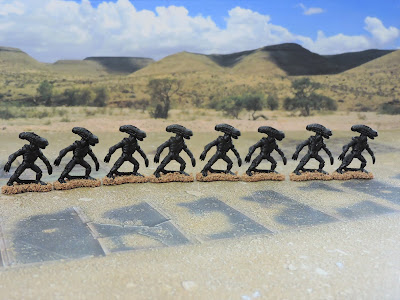 A close up of the striders: 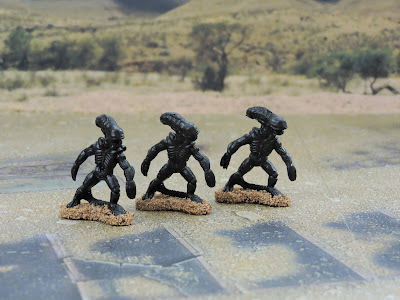 The next group consist of standing creatures: 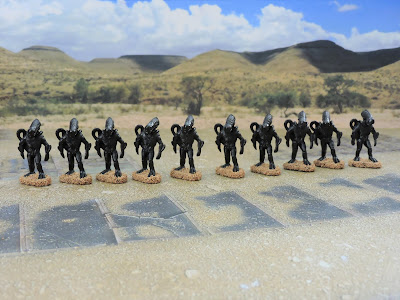 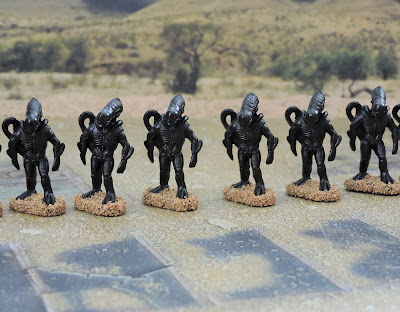 The last group of upright figures are in "guardian" poses. 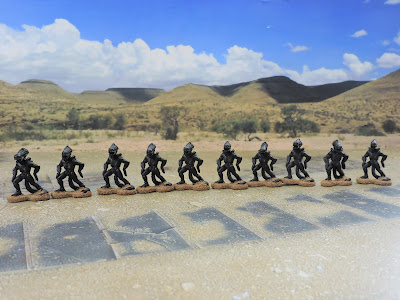 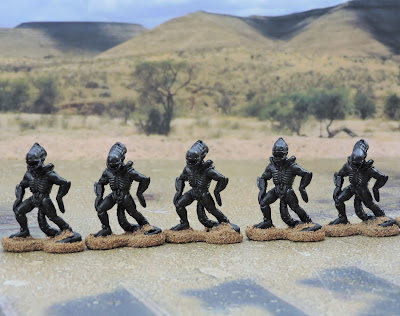 These "guardians" required an additional step before I flocked the bases.  Originally, each creature had it's tail curled around a Facehugger egg.

I cut off each egg, which was fairly easy because the plastic was soft enough for just about any modeling cutting tool to snip through: 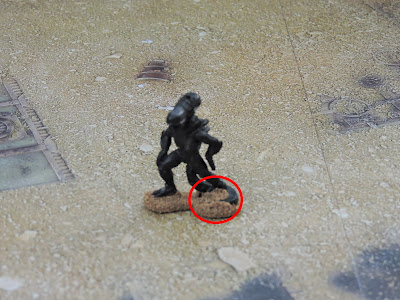 While I'm happy with my purchase of "cheap substitutes" for Tyranids, there's a few problems when using toys in-place of figures specifically made for wargames and RPGs.

First, is that toy manufacturers more often than not, pay little or no attention to Figure Scale.

The Alien Queen is a huge creature, as seen in this diorama depicting the final confrontation in Aliens:


But the Diamond Select Toys version is actually smaller than her drones, as seen below:

So I have no plans for the several queens that came with the sets.

The same goes for the Colonial Marines, which are too large to use with typical 25/28mm figures.


They might fit among 35mm figures, which might be close in scale to my Star Wars Miniatures collection--but that means I'll have to get them painted, which is not a priority for me.  Instead, I plan on saving them for my grandkids to play with as "Green Army Men."

A third problem is the weight vs. balance of some of the figures.  The creatures with the elongated bases, the "guardians" and "striders," are rather unstable and easy to tip.  I may get around to mounting them on larger, heavier bases, like washers, or something.

Despite these shortcomings, I'm still happy to have these in my sci-fi miniature wargame, RPG and maybe even boardgame collection.

The final problem with these figures has nothing to do with wargaming:

One of the main reason for this is because these toys were manufactured in China.

The repercussions of China unleashing the COVID-19 Virus into the world are still unfolding.  As I'm writing this, most of the US and many other countries are under Stay-At-Home orders.

So until the medical/political/economic/social dust settles, obtaining any future re-release of this product, or any other wargame item may be problematic.

I brought this up because the impact the Coronavirus Pandemic has had, and continues to have, on our society is impossible to ignore, and some gamers may want to avoid purchasing anything with the"Made in China" label from now on.

In unrelated news within the WH40K 'verse, the Regimental Standard reported an unspecified number of Imperial forces will be deploying to the Zone of Peace and Quiet.