Last week, my desk top, a 10 year old HP, began locking up.  Since I was on duty, I didn't have the time to deal with it other than attempt to go through on-line tutorials to figure out what was wrong.

Then one morning when I turned it on, the screen displayed the Mircosoft icon and the words:  Preparing Automatic Repair.

And it remained in this state.

Once again, I attempted another on-line tutorial fix, but to no avail.

So I took it to a nearby computer repair shop.  A couple hours later, my desktop was declared DOA.

Two capacitors on the motherboard were fried, and since the system was originally designed for Windows Vista, it wasn't worth replacing.

I'm also having some issues with my laptop:  The media player won't play, and the power receptacle seems loose.

Meanwhile, I can't manage to get my iPad Pro to do what I've had my succession of laptops, and desktops to do.

So the long delays between blogposts will be longer I'm afraid, as I embark on a quest to obtain a new desktop. 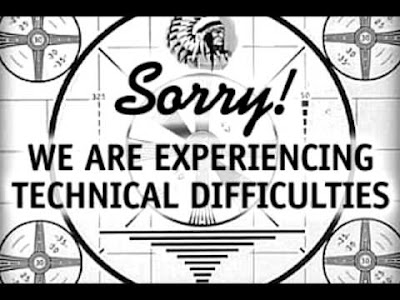 Posted by Ted Henkle at 5:47 PM No comments:

Yesterday, I received an apologetic message from NHMGS's event coordinator.

Shortly, after I did my Enfilade 2018 "fly-by" I asked her to send me an official list of the painting competition winners.

She finally came through!

Here are the winners of the 2018 Painting Competition.

I thanked her for getting back to me, and made a suggestion for next year.

I felt the brown table top masked the features of the displayed miniatures and recommended a white table cloth be spread over the painting competition's table so the figures stand out better.

I joked with her that white will fit in with next year's theme:  Winter War.

Unless, that is, competitors paint figures in winter camouflage...