Like most wargamers, I have a lot of figures to paint and/or assemble.  As part of my "Studio Expansion," I managed to put most of the unpainted/unassembled figures into one storage bin.

In addition to the boxes of Warhammer 40K figures, the box contains several pounds worth of micro-scale miniatures, ranging from fantasy and sci-fi, to World War II and modern; along with a handful of 25mm historicals.
Five years ago, I began my wretched hive project.  This now consists of several one-story buildings of scum and villainy.  Several weeks back, I stumbled across larger storage trays that will make suitable three-story buildings.

These buildings have now been primed and I still had some textured paint left over.  Unfortunately, the spray cans were all clogged, so I'll have to purchase new ones.
I haven't had any problems with my old non-textured paint--yet--and I resumed my 6mm terrain board terra-forming project.
I'm currently working on the fifth board.  This is the last piece featuring the river.  After I complete this, I'll have one last piece to renovate.
I'm always frustrated that my gaming projects seem to move at glacial speed, no matter how much time I have available to devote to them.
The same goes for my writing projects.
I'm sure I'm not alone in feeling this way.
I guess you can't rush the creative process.
Posted by Ted Henkle at 6:00 AM 2 comments: 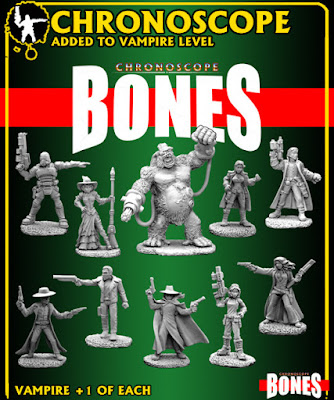 One of the hazards of wargaming is impulse buying.

Several weeks ago, I stumbled across some Bones Figures by Reaper Miniatures while browsing through the Game On! store I ventured in to.

I happened to like some of the figures, along with a loose assortment of D&D Miniatures they had.  So I bought them with little consideration about integrating them into my current collection. 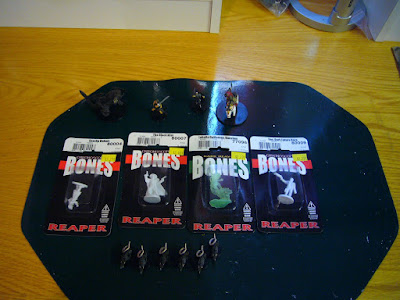 Miniatures need to be painted and the folks at Reaper, of course, recommended their own line of paint.  During my Enfilade Final Hour Fly-By, I picked up a starter paint kit from a vendor in the process of packing.  (I'm afraid I didn't catch their company name). 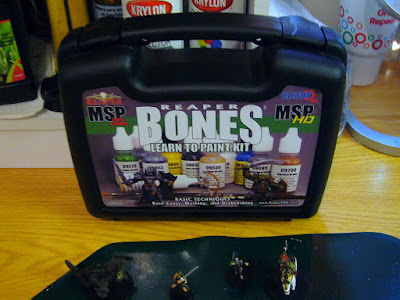 While I can't remember who I bought the paint kit from, I do know the good folks and regular Enfilade attendees at Monday Knight Productions. 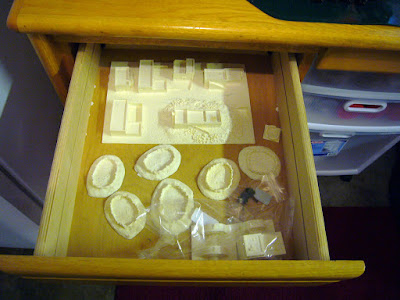 I can't remember an Enfilade where I didn't buy any of their 1/285th-scale buildings.

This year was no different, and I purchased several items that caught my interest. The items pictured above included animal pens, a power generating station and a middle eastern village. 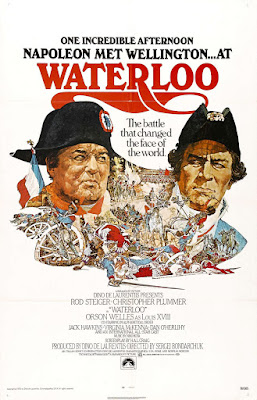 I've been off-line for the past several days. My mom passed away just over a week ago.  I got "the call" from one of my sisters when I was on duty. Fortunately, the folks my wife & I worked for (WA State Emergency Management and Alaska Airlines) pulled out all the stops to send us back to my hometown of Binghamton, in Upstate NY.

We didn't make the wake, but were in time for the funeral mass at Saints John and Andrew Church.

One, is that I was simply too busy at work and then preparing for cross-country travel. Second, I don't like broadcasting impending travel plans on social media. In fact, when we returned late Monday night, we discovered my wife's car was broken into while at the park & ride. Fortunately the thieves didn't follow-up and break into our house. (I've heard reports of crooks breaking into cars just to get the addresses of the drivers so they can break into their homes). Fortunately, our house was secure, but we weren't expecting to call-in a police report and schedule an auto-glass appointment when we got back.

But, despite the circumstances, there were a couple silver linings surrounding this trip.


The First Layer of the Silver Lining was that I had a chance to see all my siblings. Like most families, it's difficult for all of us to gather, unless it's a significant event, like weddings and funerals. The Second Layer of the Silver Lining was a chance to see most of our friends from a family that lived one house up from ours.  (Or for all intents and purposes "next door").

There are six siblings in this family and we all grew up together--and more often than not--got in trouble together. Our respective moms were friends as well. Their mom passed away 11 months ago, and the siblings still in the local area attended our mom's wake and/or funeral.

Not only were our "K-12 Friends" the last to leave the reception, but we got together the following night at their mom's house, now up for sale, in The Old Neighborhood.

We spent our time lounging in the backyard, reminiscing and catching up.  In fact, the radio station we were listening to, WAAL 99.1 ("The Whale"), is now plays classic rock.  So we heard the same songs we did during our collective childhood/adolescent years.

When I think about my youth, I like to say: We didn't just watch The Little Rascals (aka Our Gang)--we lived it!
Posted by Ted Henkle at 7:30 AM No comments:

Email ThisBlogThis!Share to TwitterShare to FacebookShare to Pinterest
Labels: Family and Friends 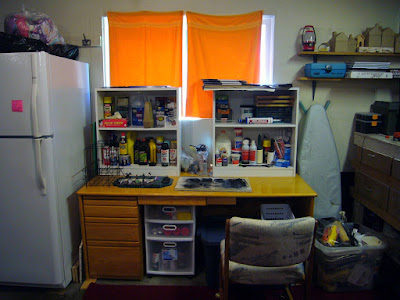 A lot of Life Changes has occurred on the "deck" of Stern Rake Studio these past two years.
First, my wife's job allowed her to work from home.  Then my daughter and her boyfriend moved-in and stayed with us for over a year.  During this time, my wife moved her work station into the studio, so things have been rather cozy for us.
When my daughter and boyfriend moved out, we rented a storage/shipping container for them to take all the furniture we set aside for them.  Now we have a spare room and more open space in the garage--although still not enough to park one of our vehicles.
So Stern Rake Studio has re-expanded.
My wife re-arranged the garage, and our spare room into sitting/hobby room for both of us.  There's still enough floor space in the Sitting Room to place a portable mattress for the occasional house guest.
The above picture is of the surviving half of my old desk underneath some shelves.  This now serves as a paint station.
Here's a few more picture's of the Studio expansion:

Now that the Studio "deck is cleared for action," I've started chipping away my unfinished pile of metal, plastic and cardboard.
Posted by Ted Henkle at 6:00 AM 2 comments:

Originally, I was going to write my Marvel Movie Marathon as one blogpost.  But as I neared the end, I felt the darker, non-superhero nature of the last two movies deserved a review of their own.

In this origin story, mob boss Howard Saint's son gets himself killed in an FBI sting operation headed by soon-to-be-retiring Agent Frank Castle.  Saint orders his mooks to kill Frank, but his wife demands the entire Castle Clan be exterminated while attending their family reunion. Frank is left for dead, but recovers, and sets out to bring down not only his Motivational Nemesis, but his entire criminal empire.

The film deviated from the original source material in a number of ways.

First of all Frank and his wife had two children, a son and daughter.  All of them were killed when they witnessed a mob hit.  But in this movie, Frank only had one son, but the family body-count was much higher.

Second, the action took place in Tampa, Florida, and not the Punisher's usual hunting ground of New York City.

Despite these deviations, I liked the film and thought it deserved a solid 3-star rating.

As for my final "punishing" review:  What started off as a sequel in the development stage, turned out to be the reboot known as...

War Zone begins InMediasRes, along with returning to its New York City roots.  That is, it's been several years since Frank's was killed, which is depicted in flashback images.  Frank takes a "Ten Minute Retirement" when he learned he accidentally killed an FBI undercover agent during his one-man raid on a mob family gathering.  He's convinced to "return to duty" by his ally Microchip, he sets out to protect the widow and her daughter from the bad guys he didn't kill in the opening scene.

This movie is not for the faint-of-heart:  Mooks are mowed-down in blood-splattering droves throughout the film.

Even though Punisher: War Zone was a box-office bomb, I liked the film and rate this one as 3-stars, despite not being a date movie, or family-friendly film.

I'm not alone in my admiration for The Punisher.  Most guys who are, or have been, in the military can identify to some degree with Marvel's main vigilante.  The most notable military fan was Chris Kyle, a.k.a. American Sniper.

Picking Between the Punishers:

At the risk of hedging my bets, I liked both movies in near-equal measure.

Thomas Jane did a great job of portraying Frank Castle in 2004 film.  The cunning way he waged his war against the bad guys who killed his family is known as The Batman Gambit.

On the other hand, I'm a fan of Ray Stevenson and thought he evoked more feelings into his performance in Punisher: War Zone, than perpetual vigilantism.  I thought his scenes with the widow were especially moving.

There are actually three feature-length Punisher films available.  The one I haven't seen is the very first one, produced in 1989.

But based on the smattering of reviews I've read about this near stillborn franchise film, I feel I'd be okay skipping it.

In Comic Book Movie's Who Was the BEST Punisher? poll, Thomas Jane is the clear favorite (62%) with Ray Stevenson coming in a credible second (30%) and Dolph Lundgren lagging in last place (7%).
Posted by Ted Henkle at 6:00 AM No comments: