I've been out of town and off-line for over a week now.  I have a good excuse though--I was attending my daughter's BIG, FAT WESTERN WEDDIN'.

She's loved horses ever since she was two years old, so naturally she wanted a western-themed wedding hosted by Events at Iszy's.

However, while my daughter got hitched, events didn't go without a hitch.  But at least things didn't go totally off the rails.

I came down with a cold four days prior to our trip.

Then, on The Big Day it rained, which forced us to move the ceremony under the barn roof.  Of course the rain stopped as soon as the happy couple said their "I do's."

While all the out-of-town guests left the following day, we stayed behind to help the Maid of Honor clean up and have brunch with my daughter and her husband.

Afterwards, with my siblings gone and my wife resting back at the hotel, I was left with several hours of unexpected free time.

Greenville, SC, is home to several game, hobby and used book stores.  After a quick Google-search, I selected a few nearest our hotel, and all of them along Laurens Road.

My first stop was Borderlands Comics and Games.  The place divides it's space equally between comics and wargames.  There were several Star Wars X-Wing figures and some desert terrain by Gale Force 9's Battlefield in a Box line that I was interested in.

So I settled on a few Firefly-themed magnets, (illustrated in this post).I thought the Space Western merchandise was a great reminder of my daughter's western-themed wedding.  I also got a Rosie the Riveter one for my wife.

The other two places I ventured to were Richard's Comics and Collectables along with 2nd and Charles. The first store dealt exclusively with comics and comic-related merchandise, while the 2nd was a used book store similar to Half Priced Books here in WA State.

I didn't buy anything at either store, but it was a pleasant Sunday drive and I enjoyed exploring these stores.

So if you're ever in the Greenville, SC area they're worth checking out.

It's been several months since I produced a YouTube video.  In fact, the last three were about different segments of Enfilade 2016.

During last year's convention, I spent the entire event as the "official" photographer.  Most of the 754 usable pictures made their way to newsletters, the evolving Planned Events List (PEL) for Enfilade 2017, and my own webcomic strips.

Since I had to work on Saturday, I had enough time to zip down to the main game room and take 126 usable pictures.

The topic of this video is the historical land-battle games played during Time Period F, on Saturday night (27 May 2017).

Games involving other aspects of warfare, such as areal and naval battles, along with non-historical sci-fi and fantasy games were also played.

Unfortunately--for now--those games are "on the cutting room floor."  I made this "Director's Decision" because I wanted to fit the pictures in with the three-minute sound track I selected.

If I find a suitable piece of music for the handful of other pictures I took, I'll splice together another movie.

As to the one naval game I played during Block F, that will be an After Action Review for a later blogpost.

In the meantime I hope you enjoy this video. 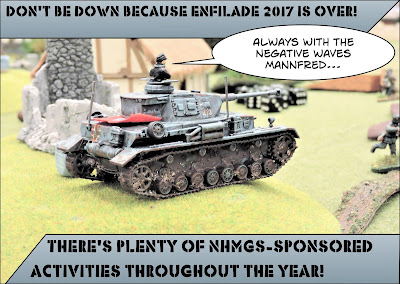 Of which, this one, from an Operation Barbarossa game, is my favorite... 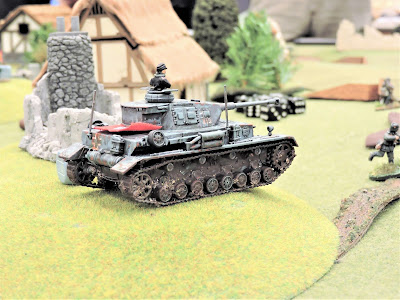 ...and is the basis for my Kelly's Heroes themed comic.

This photo has a better point of view... 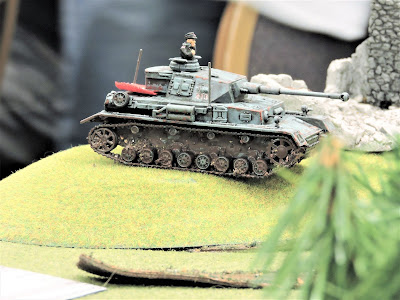 ...however, it doesn't fit well within the Comic Life program I utilize.

Well, now I have another 124 pictures to make use of.
Posted by Ted Henkle at 6:00 AM No comments: