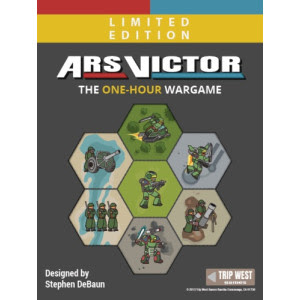 In addition to Risk Battlefield Rogue, which I posted about yesterday, I also picked up Ars Victor (Limited Edition) for $18, after using my 20% off coupon, at Half Price Books.

I was impressed by the hefty weight of the game, and the solid feel of the box.

But I held off buying this game until I was about to leave the store.  The artwork reminded me of Warhammer 40K but drawn by Rich Burlew, creator of Order of the Stick.

It's one thing to read webcomic in stick figure style, but can be another issue entirely to play a game with such cartoonish graphics.

Despite my reservations, the geomorphic maps, playing pieces and tokens are made of thick and sturdy cardboard.  The rules are written in large print, with plenty of illustrated examples; which is great for young players--or older ones with aging eyesight.

Other selling points about the game are that it can be played in about an hour, and can serve as a great introductory game for youngsters (without traumatizing them with the "...grim darkness of the far future...").

The images on the playing pieces resemble kid-friendly versions of the Eldar, the Imperial Guard (aka Astra Militarum) and mutants.

Ars Victor (Latin-ish for "Art of Victory/Winning") is highly rated on both Boardgame Geek and Amazon.com.

Play Unplugged has a thorough review as does Boardgame Geek, along with an entertaining tutorial on YouTube produced by the Ars Victor creators and a video review by Marcowargamer. 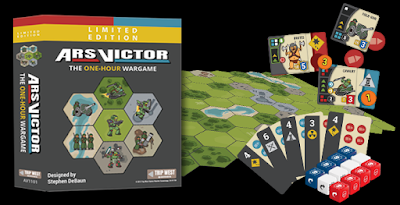 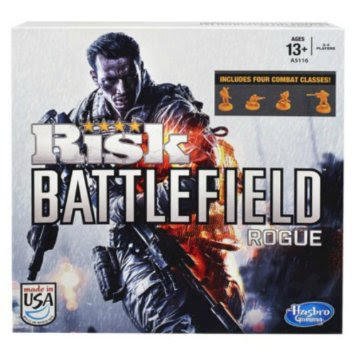 A couple weeks ago, I had a 20% off coupon from Half Price Books, and the time off to travel to the nearest store.

One of the games that caught my eye was Risk Battlefield Rogue.  I never heard of, let alone played, Battlefield 4, which was the inspiration for this tabletop version.  Nor did I do any research into either game since I had no idea what I'd find at Half Price Books until I got there.

The store was charging $13.99 for the game, and now that I've had a chance to examine it, I feel I paid too much.

Debuting with little or no marketing fanfare, the game was quietly distributed and sold through Target for $30 back in 2013.  You can now get it for $5.00--$8.00 on Boardgame Geek's Marketplace, but you'll have to pay for shipping and handling as well.  So I don't think I paid that much more than anyone else, unless they find it at a garage sale.

Risk Battlefield Rogue has the worst rating of any item I've seen offered on Amazon.com:  An average of 2.8 out of 5 stars, with 37% of the ratings being 1-star.

The biggest complaints centered on the following:

1. The flimsy cardboard map sections and cards (the plastic soldiers were considered good).

2. Dice requiring stickers to be placed on them.

3. Including "Risk" in the title was a blatant marketing ploy, since the game bears no resemblance to other Risk games.

5. The poorly written and confusing rules.

And speaking of rules:  When I got home, I used copy my game didn't have any.  Fortunately, it was easy for me to find a PDF version that I downloaded and printed.

Despite all the negative reviews there are a few players who like the game, especially ones who've played Battlefield 4, and/or have an "it is what it is" attitude.

I'll probably keep the game for a while, until I actually play it and the session is as bad as the 1-star reviewers say it is.


Have you ever forgotten, or misplaced something, and when you re-discover it, you're filled with a euphoric Christmas-morning feeling?

That happened to me yesterday when a large package arrived that I wasn't expecting.

It was from The Miniature Market that I completely forgot about.

Inside the well-insulated box were--

--and Battlefield in a Box's Asteroids.

For the past several days I've been on-and-off duty, having to fill-in for coworkers who were sick, or who's children were ill.

So I don't have the time at the moment unpack my new acquisitions, let alone posting a full Product Review.

While I'm concerned about my memory lapse, this "unexpected" delivery has done much to brighten my mood for the long days and nights at work.
Posted by Ted Henkle at 7:30 AM No comments: 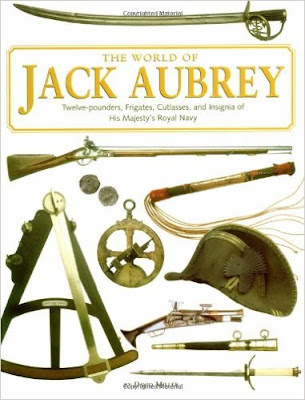 If you're looking for a short reference book on the setting of Patrick O'Brian's Aubrey-Maturin Series, then The World of Jack Aubrey may fit the bill.

I can't remember when, or where I bought this, probably at Half Price Books.

After receiving my latest shipment of Sails of Glory, I was in the mood for an Age-of-Sail book I could easily read while on a cardio machine at the gym.

The World of Jack Aubrey is nicely illustrated, contains some informative charts, and provides a nice overview of life in the British Royal Navy during the Napoleonic Wars.  Other navies and even pirates are given a paragraph's-length examination.

If there's any shortcoming about this book it's--well-- it's short.  Weighing-in at 96 illustrated pages, it took me just over two hours to finish.  Some of the chapters end rather abruptly.  I noticed a couple of typos, while one of the 3-star raters on Amazon.com discovered even more.

The World of Jack Aubrey is a nice introductory, Age-of-Sail reference book that doesn't take up too much room on your book shelf, and is handy to have at your side while reading.

The book earned an average of 3.9 out of 5 stars on Amazon.com.  Even the readers who liked it, commented on the thin amount of material there is between the front and back covers.

While I liked The World of Jack Aubrey, and plan on keeping it, I'd have to go elsewhere for more in-depth material.  So I give it 3-stars.
Posted by Ted Henkle at 6:00 AM No comments: 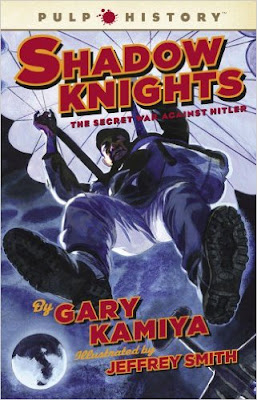 Nearly six years ago, Simon & Schuster started a line of books called Pulp History.  The intent was to introduce readers to some of the past's most thrilling stories.

And what could be more thrilling than British agents infiltrating Nazi-occupied Europe?

Shadow Knights: The Secret War Against Hitler is an illustrated book about some of the men and women of Britain's Special Operations Executive (SOE).

While the book touches on various aspects of SOE's existence, the focus rests on the exploits of Harry Ree, Noor Inayat Khan, and the team of Norwegians responsible for the destruction of Germany's heavy water production.

In addition to stirring accounts of survival, betrayal, capture and the occasional triumph; Shadow Knights is lavishly illustrated with maps, sidebar notes, while artist Jeffrey Smith's splash pages bring the characters to life.

I give this book a solid four-star rating, leaning more towards work of entertainment than an in-depth historical analysis of irregular warfare waged against Nazi Germany.  For the sake of telling stories of derring do, Shadow Knights "pulps over" many aspects of World War II, outside the scope of SOE's operations.
The book has a 4.5-star rating out of 5 on Amazon.com.

Unfortunately, Simon & Schuster's Pulp History fizzled out after releasing only two books, the second being, Devil Dog: The Amazing True Story of the Man Who Saved America.

Both books can be found in used book stores or through Amazon.com.

I have two announcements.

While I'm happy with my purchase, I'll probably end up contacting 1 & 1's customer service.  In my zeal to obtain the domain name, I didn't proofread my purchase as thoroughly as I should have.  The "dot com" domain will be listed as "stern-rake-studio,"  while the "dot net" domain will be "sternrakestudio."

Of course, 1 & 1, along with every other domain company attempts to get customers to monopolize every possible permutation of their chosen domain name as possible.  I figured grabbing the dot net name would be enough.  I don't feel the need to corner the Stern Rake Studio market.

At least not yet.

The second announcement is that I've changed the logo to Stern Rake Studio.

Since I'll have a bona fide website (eventually), I thought I should have my own logo instead of hijacking one off the internet, even if the image is public domain.

I staged a hypothetical fight between HMS Orpheus and the Carmagnole, from my Sails of Glory collection, and took over 185 pictures using my old Panasonic Lumix and my new Nikon CoolPix cameras.  The reason I snapped so many pictures is because it was a partly cloudy day and I made several setting changes on my camera, along with turning interior lights on and off.

After deleting all the blurry images, I played around with the color and lighting on each photo using the Windows Paint program and Paint.Net.  Then I used Paint.Net's ink sketch program to make it look like I drew the images.

I wanted to use this image... 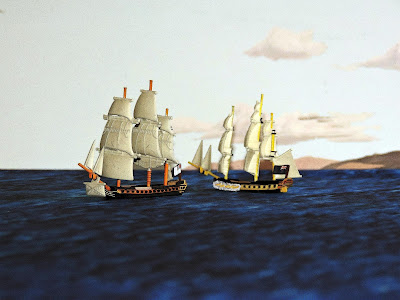 ...of HMS Orpheus conducting a stern rake maneuver against Carmagnole with "guns blasing," thanks to the Windows Paint program.  Unfortunately, when I uploaded this on to Blogger, the only image I got was of Carmagnole's bowsprit and foremast.

Here's another image I would have liked to use: 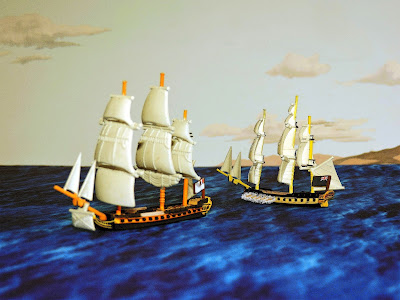 I even took "reverse image" photos, but none of them came out as well as I wanted.  The Carmagnole's hull was too dark in all of them, which made it hard to spot the ship's gun ports. 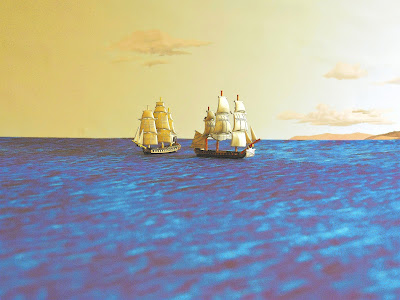 I also took pictures using a grey cotton ball to represent Orpheus' cannon belching smoke.  I would have used the Windows Paint program to make the image more "realistic," but I didn't like the way the cotton ball obscured the details of HMS Orpheus. 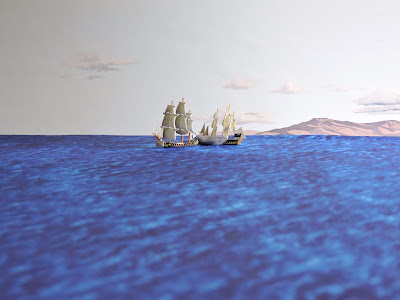 For now, I've settled on the current header picture for this blog.  I plan on coming up with a better image--hopefully sooner, rather than later.

In the meantime, among the various photos I do like, I made images with "Stern Rake Studio" imprinted on them using various fonts.  These will be used as logos for future webcomics and YouTube videos. 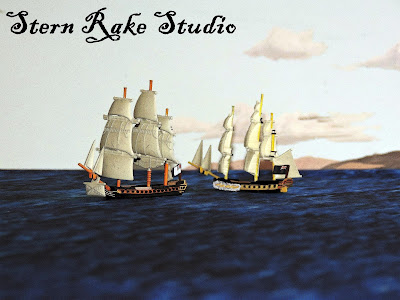 I'm sure I'll be making more improvements in the future.