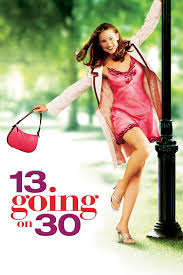 I haven't seen a made-for-the-big-screen romantic comedy in years.  For the past few months, any time we're trying to decide what to watch for an evening in, my wife would suggest 13 Going on 30 (IMDB)  I, of course would recommend something else, and we'd watch that.

This worked--until I ran out of alternatives.

We finally watched the movie shortly before the Holiday Season and I'm glad we did.

While not a Christmas movie, 13 Going on 30 (Wikipedia) is an endearing, but cautionary tale, of wish-fulfillment.

Jenna Rink is humiliated by a pack of popular girls at her 13th birthday party, and she wishes to be "thirty, flirty and thriving."  She wakes up to find her life has been fast-forwarded 17 years, and she has everything she's ever dreamed of.

Or so it would seem.

But, as everyone could probably guess, things aren't what they appear to be.  Because Jenna has no knowledge of the intervening years, she's slow to realize her life isn't what she appears to be.  She isn't who she thinks she is.  Jenna is no longer the adorable girl-next-door, but a vindictive, avaricious,

She tries to make things right, and even win back the boy-next-door (when they were 13)--and fails on all counts.

When all seems lost, she's granted another wish, this time to be 13 again.  She wakes up in the midst of her 13th birthday party and gets to a do-over.

While I've know of Jennifer Garner and the show Alias, but I've never actually seen either the actress or the show.  I thought Miss Garner did a charming job of portraying a 13 year-old in a 30 year old body.

I give this movie a 4-star rating.  In fact, I liked it better than Big, to which it's compared to. While 13 Going on 30 is predictable, it's a sweet 98-minute experience for you, your partner and your family--if your children are 13 years, or older.
Posted by Ted Henkle at 6:00 AM