Enfilade is just one of several gaming conventions sponsored by the Northwest Historical Miniature Gaming Society.

Next weekend, Tactical Solutions will be held at the Red Lion/Centennial Inn, in Spokane, WA.

I've been wanting to attend this convention for years, but haven't been able to coordinate the time off from work or other commitments.

And unfortunately, this year's no different.

To "atone" for my non-attendance, I concocted a few e-card/webcomic advertisements for this upcoming convention.

The pictures are from the Fix Bayonets Game Day I managed to attend a couple weeks ago.

In the meantime, I hope you enjoy these. 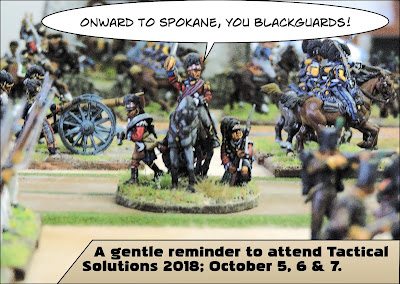 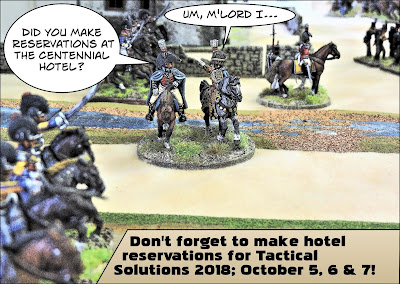 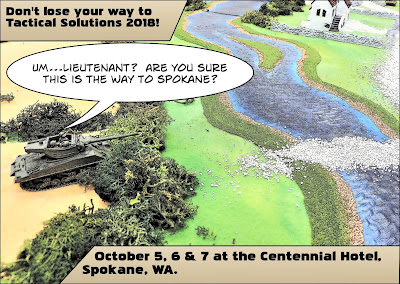 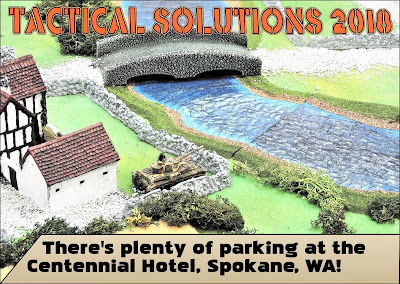 Last Saturday, I managed to have the day off--and--attend this year's Fix Bayonets game day.

This event, hosted by Lawrence, a member of the Fort Steilacoom Historic Society has been going on for eight years now.

I attended the very first game day in 2010, but wasn't able to attend another Fix Bayonets until 2015.

At least this time around, it hasn't been a five year gap between these annual events.

Anyway, not only did I show up, but participated in two games, noted below, and will be the subjects of later posts.

For now, here's some pictures and overall impressions of the set-up and games I didn't play.

The entry fee was a $10 donation to the fort.  Just off to the right of the entrance, the folks from Stonehouse Miniatures set up shop.  Not only did they bring their own excellent model terrain, but they obtained about a dozen boxes of boardgames from an estate sale.


There were two gaming periods, morning and afternoon.

The afternoon events were a more modern/alternate history and sci-fi fare:

2. An steam-punk battle using the All Quiet on the Martian Front rules, hosted by Dale.

3. A WWII tank battle using the rules Whatatanker, hosted by Lawrence and Damon.*

(*Note:  Games I participated in.)


All Quiet on the Martian Front:

Iroquois and Huron warbands come to blows in this game.


Most, if not all, the figures and terrain for Songs of Drums & Tomahawks were made by Kevin, author of A Gamer's Tale blog.

Mitch used a stunning ground cloth made by the Cigarbox Battle Store, which helped win him Best Looking Game for the morning period.

Mitch, author of the West Sound Warriors blog, wrote a game report, of a similar, if not the same battle replayed during Fix Bayonets.

I took over 200 photos, of which 160 were usable.  Most of these were divided between Dean's Black Powder game, and Lawrence & Damon's Whatanker.

These games will be the subjects of two upcoming posts.

That is--as soon as I sift through the photos, choose the best ones and concoct a coherent story. 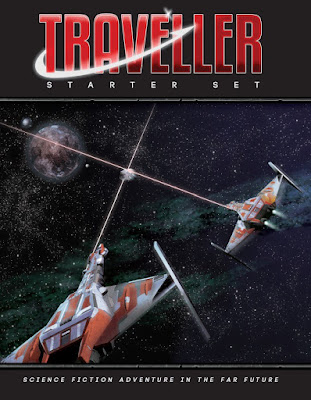 Several months ago, I stumbled across the Traveller Starter Set at The Game Matrix.

I can't claim I've been a Traveller fan since it's initial release, but I can say I purchased the little black box... 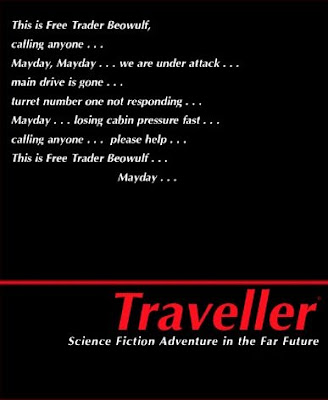 ...within three years after it's debut publication.

Since then, I've collected most of the subsequent editions, ending with the GURPS and "T-20" versions. 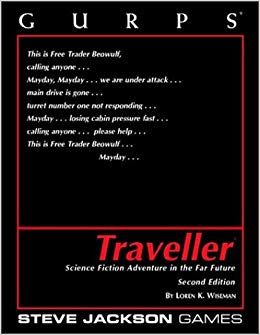 I've seen Mongoose Publishing's version of Traveller for the past decade, flipped through some books at game stores, but nothing really motivated me to buy anything new.

So when I bought the Starter Kit on a whim, I didn't think it would lead to anything significant.

This turned out to be the gateway drug to reigniting my dormant interest in Traveller.

I was impressed by the production quality, because in the past, I've found Mongoose Publication's quality control to be hit-or-miss.  This is Mongoose's second edition of Traveller, and they've done a lot to bring the game up to date from "The 80s With Starships!"

Misgivings aside, and not satisfied with the Starter Set, I purchased the 2nd Edition Core Rulebook. 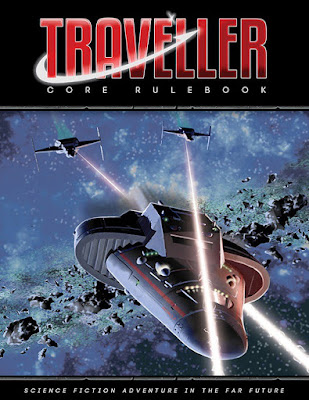 This in turn, triggered a buying spree of both old and new Traveller material, starting with the Game Master's Screen. 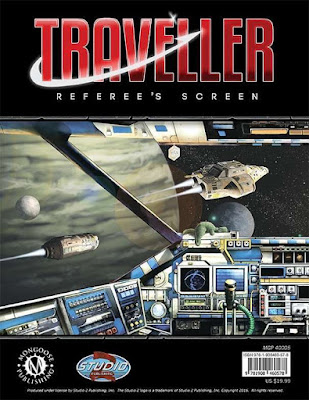 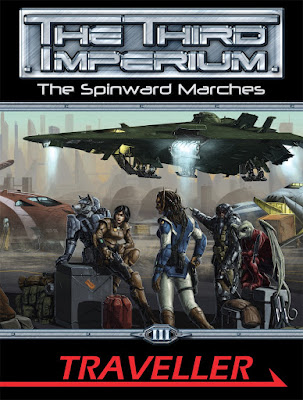 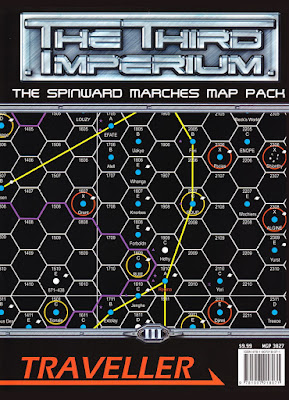 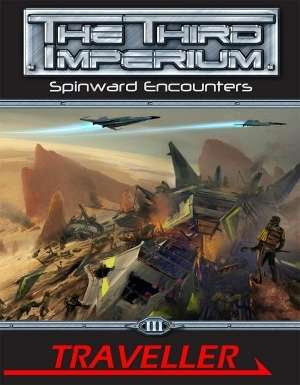 ...and the Tripwire campaign. 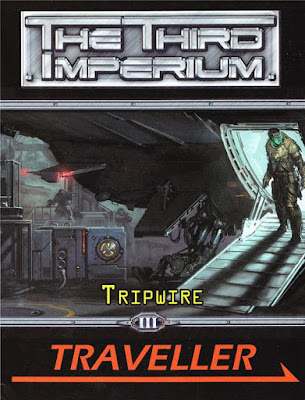 Now here's where my misgivings about quality control became justified.  While 2008 Edition of the Spinward Marches got decent reviews, I thought a lot of readers were pulling their punches.

While the content in every Third Imperium publication I bought was good, I found there was a complete lack of editorial oversight.

Just about every page, in every book contained a grammatical or syntax error.

It's as if the material was written then sent off to Mongoose Publications without anyone bothering to edit or review it.

The number and consistency of errors made the material hard for me to enjoy reading.  But if you're more concerned about getting material for game mastering a session than you are about the proper use of written English, then Third Imperium books won't be a waste of your money.

These mixed feelings didn't stop me from buying material on the Spinward Marches' "next door neighbor," the Deneb Sector 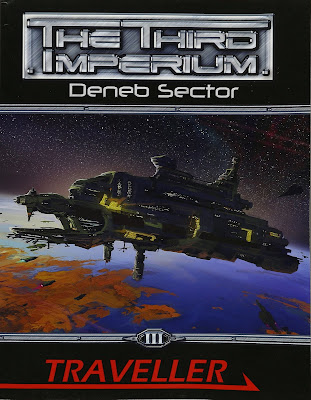 After reading through all the new material--and hoarding my money for new purchases--I decided to "take a look back" and buy material (now out of print) I couldn't afford to when they were initially published.

For that "big picture" look, my first purchase was the Fifth Frontier War (which erupts in the year 1107). 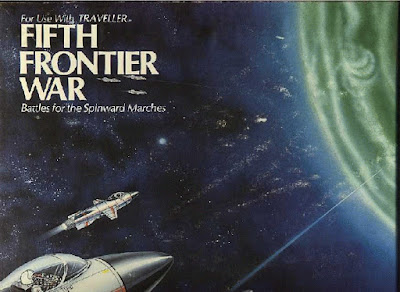 Since player characters, or "travellers" as they're called in the game, journey around in starships, I thought getting the games Brilliant Lances... 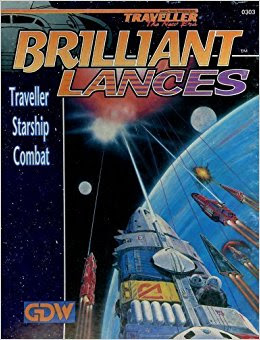 ...and Battle Rider would add to any game session. 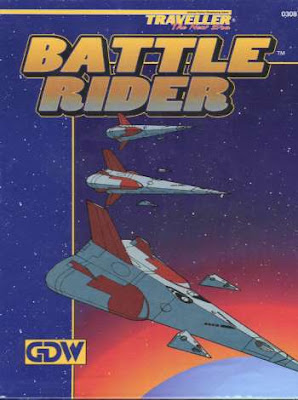 The rules to both games are complex and actually set in post-Imperial collapse of The New Era (which starts in the year 1116)--but the counters look cool!

It's 1105 again, and Mongoose Publications continues to make products set in the Spinward Marches, like the introductory adventure High and Dry. 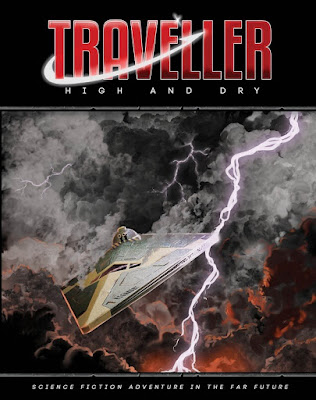 In this book, the travellers are given the chance to find and return an abandoned starship.

However, this is a classic case of "easier said, than done."

Most of Mongoose Publication's attention seems to be focused on The Great Rift, a vast volume of space with very few star systems--and refueling points. 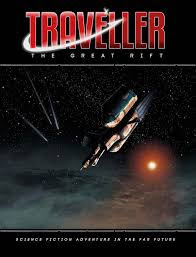 There's even "rift-version" of the High and Dry adventure--Islands in the Rift. 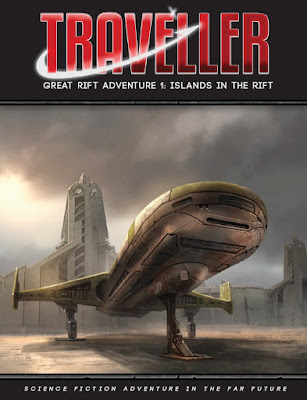 In this case, not only will the travellers have to find and return a starship, but they'll have to contend with intrigue and skulduggery in the Old Islands and New Islands subsectors.

Overall, I'm happy with all my out-of-print and up-to-date Traveller purchases.

Now all I need is some free time to "travel" among the tabletop stars...
Posted by Ted Henkle at 5:00 AM No comments: