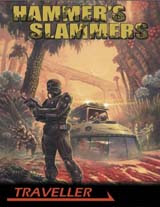 David Drake penned his first Hammer's Slammers stories in the early 1970s, after his stint in Vietnam with the 11th Armored Cavalry Regiment (ACR).
Several years later,  Traveller , the science fiction role playing game (RPG), designed by Marc Miller, Rich Banner and Frank Chadwick, through their company, Game Designer's Workshop (GDW).  When GDW closed in 1996, Traveller experienced an intermittent publication run, until 2008, when Mongoose Publishing released the latest version of this ever-popular RPG.
So it was only a matter of time before classic sci-fi literature and the classic sci-fi RPG merge.  The result is the Hammer's Slammers Supplement by Gareth Hanrahan and edited by Charlotte Law.
This 206-page supplement, along with the Traveller Core Rulebook, provides everything players need to assume roles as soldiers in the Slammers Regiment, or some other mercenary unit.  The book is divided into 15 chapters which include sections on--character creation, vehicles and equipment, combat and the history of the Slammers, to name a few.  Two military-style campaigns are also included, along with a forward by David Drake.  One of my favorite chapters is the Character Roster, which provides bios and sketches of some of the notable characters in the Slammers series.
This is book is a definate buy for anyone who is both a Traveller and Slammers fan.
Posted by Ted Henkle at 1:00 AM 2 comments: 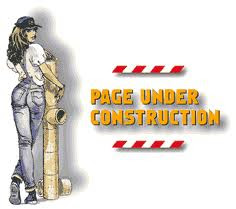 A blog is a work in progress, since there's always something that can be improved upon.  My friend Dean just showed me how to use the Link function on Blogger's toolbar.
So now (after two years) I can turn this:  http://wabcorner.blogspot.com/ ...
...into this: WAB Corner
It may not improve my writing skills, but at least it will make my posts more presentable.
Thanks Dean!
Posted by Ted Henkle at 1:03 AM 2 comments: 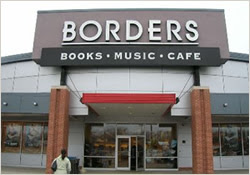 As a writer, one of the saddest events of our economic times is seeing Borders close.
Stacey Curtin of Yahoo Finance's Daily Ticker has the story behind the bookstore's bankruptcy:
http://finance.yahoo.com/blogs/daily-ticker/another-retailer-bites-dust-borders-doomed-amazon-deal-163606690.html
Christina Katz, author of The Writer Mama and Get Known Before the Book Deal, shared her memories of Borders on her blog:
http://christinakatz.com/borders-to-liquidate-assets-share-your-borders-memories-meme/
Posted by Ted Henkle at 12:50 PM 2 comments:

Email ThisBlogThis!Share to TwitterShare to FacebookShare to Pinterest
Labels: News

The Studio's "on Location"

My divorce was finalized last month, so I've spent most of my off-duty time looking for, and moving into a new home. This gives me little time to post anything. When I get resettled, I hope to resume posting at my normal, or even better, rate.
Posted by Ted Henkle at 11:05 AM 2 comments:

The Quest for King Arthur 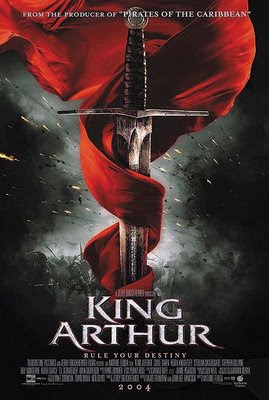 (Image:  Poster for the 2004 movie)
Like many wargamers, I was first exposed to King Arthur from various childrens books and old movies, as well as select readings from Thomas Malory's Le Morte d'Arthur in high school.  For the most part, my interest in Camelot and all that often lay dormant.  But every now and then, it would spring to life in a big way.
Several years ago, I read the Warlord Trilogy, Bernard Cornwell's novels on the historical King Arthur.  Or at least as historical as one could get on such an enigmatic figure.  His spin on the Knights of the Round Table blew me away and I haven't been able to recommend these books highly enough since I read them:
http://www.bernardcornwell.net/index2.cfm?page=1&seriesid=4
Last week, my interest returned when I stumbled across the Dark Age Wargaming blog.   While very little is known about "the once and future king." This, however, didn't stop "Historian on the Edge," from writing a series of wargame articles on Arthurian Britain.  These ten pieces were originally published in Wargames Illustrated magazine:
http://darkagewargaming.wordpress.com/category/age-of-arthur/

And despite the anachronistic armor, who can forget this stirring scene from Excalibur (1981)?

Talk about music to wargame by...
Posted by Ted Henkle at 2:35 AM No comments:

Email ThisBlogThis!Share to TwitterShare to FacebookShare to Pinterest
Labels: Wargaming--Medieval

David Drake borrows from events in Italy, circa 5th Century BC, merges it with elements from Patrick O'Brien's novels and sets it in space. This 5th book in the "RCN Series" continues the adventures of Commander Daniel Leary and his signals officer/spy/librian friend Adele Mundy. Together, with their shipmates from the corvette Princess Cecile, they confound the corrupt politicians on four planets, stop an army from invading an allied world and shoot down a blockading cruiser. The story is a little slow at several points, because the good ship & crew end up traveling back & forth several times between three planets, to obtain weapons, crewmen and even a destroyer. The author's premise for space travel appears plausible and makes readers feel they're immersed a "Horatio Hornblower in space" yarn. While it's a decent stand alone novel, it's best appreciated if you've read the previous four books.
I give the story a 4-star rating and according to Amazon.com, three reviewers out of 22 agree with me.  Some Golden Harbor garnered six 5-star ratings.  However, most of the reviewers, nine in all, gave the book a 3-star rating.  Two 2-star and one 1-star rating followed in the novel's wake, giving it 3.5-star average:
http://www.amazon.com/Some-Golden-Harbor-David-Drake/dp/1416555242/ref=sr_1_1?ie=UTF8&qid=1310355126&sr=8-1

For more information on David Drake, check out his website at:
http://david-drake.com/
Posted by Ted Henkle at 8:40 PM No comments: 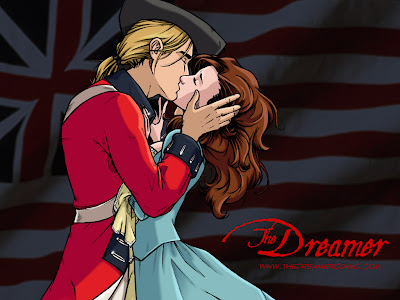 (Image:  Promotional art for The Dreamer web comic, by Lora Innes)
A couple years ago I stumbled across Lora Innes' award-winning web comic, The Dreamer.  It's a story about a teenage girl having a nightly dream, which drops her into a crucial campaign of America's War of Independence.
http://thedreamercomic.com/index.php
As Lora says on her website:  1776 is back.  Enjoy the Revolution.
http://www.youtube.com/watch?v=WvUbHnGrml4
Posted by Ted Henkle at 1:00 AM No comments:

Book Review: We Are Not Alone--The Writer's Guide to Social Media

Most writers admit they're nerdy introverts.  However, the explosion of internet usage and the implosion of the US economy, created a push-me/pull-you effect, which has shoved/dragged writers outside their comfort zones.  The marketing budgets of publishing houses, writers use to rely on to launch media blitzes, have shrivelled.
So now, authors can no longer live a J.D. Salinger-esque life and must be their own publicists.  The problem is:  Right-brain, creative types usually don't possess enough business savvy to be financially successful.  (This is a polite way of saying we're inept at marketing ourselves).
Fortunately, social media sites like Facebook and Myspace, provide the medium where authors can harness the power of word-of-mouth and increase their book sales.  The trick, though, is to harness social media effectively. Not everyone has the skills to fly solo into cyberspace.  (See my parenthetical comment above).
This is where Kristen Lamb's book, We Are Not Alone--The Writer's Guide to Social Media, comes in.  Kristen is one of a handful of pioneer gals, blazing a trail in the new cyberfrontier.
"WANA," as Kristen abbreviates it, is a step-by-step guide for writers, on how to establish, maintain and most importantly, expand, their presence on social media sites--without detracting from their primary task of writing for publication.
I stumbled across Kristen's blog several months ago, before buying her book.  Her outrageous sense of humor and breezy conversational style makes her a joy to read.  Although her humor was a tad subdued in WANA, I found her book just as helpful as the other 14 reviewers on Amazon.com, who gave it a 5-star rating.  WANA's lowest score comes from a single, 4-star rater.  This reviewer, though, did make a couple of valid points.  WANA, as I mentioned above, is an introductory guide and may be too basic for any experienced cyber-ninja.  Another point is, WANA does contain some grammar and syntax errors.  However, these should be fixed in later editions.
Despite such minor detractions, this is an indespensable reference for getting established and effectively operating on all the current social media sites.  (And improving my blog--but that's another topic).  My rating adds a 15th 5-star to Kristen's constellation on Amazon.
Amazon.com's link to WANA:

http://www.amazon.com/We-Are-Not-Alone-ebook/dp/B003VD1EQC
Keep up with Kristen (ha! as if you can!), on her blog:
http://warriorwriters.wordpress.com/

Kristen's new book, Are You There Blog?  It's Me Writer, was released a couple of months ago: