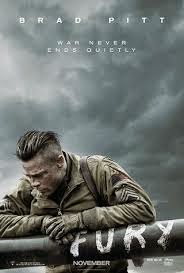 If I had to limit my movie reviews to six words or less, I'd say this about Fury:

It lives up to it's trailer.

The story follows the crew of a Sherman Tank (an M4A3E8) during the allied offensive into Germany.  (A plot synopsis (with spoilers) can be read here).

If I had only two words to describe the film, they'd be:  Gritty and graphic.

The combat scenes are some of the most realistic--and graphic--I've ever watched in a movie.

I had a couple quibbles on how the American tanks always seemed to be too bunched up, and about the mad-dash assault on the town, with the tanks in the lead.  But my friend Tim pointed out in an e-mail exchange that; terrain, weapon capabilities, operational imperatives, and inexperience often resulted in actions that were less than "field manual" affairs.

And this is a movie after all.  As is often the case, historical accuracy takes a back seat in favor of what looks good cinematography-wise.  But in Fury's case, it's great cinematography.

The American GI's are portrayed as "rough around the edges," to say the least.  Some are rough naturally, while others become so after "...fighting Germans in North Africa..." and are "...now fighting Germans in Germany."  The GI's harbor a special hatred for the S.S. (Schutzstaffel), which is understandable given the S.S.'s reputation for brutality.

But not every German is a Nazi Party member.  Fury portrays the Germans as a mixed lot:  From civilians desperate to see the war end, to die-hards, who are willing to kill their own people for not maintaining their loyalty to the crumbling "Thousand Year Reich."

Fury has earned 8 out of 10 stars on IMDb's rating system, and 4 out of 5 on the traditional system.

I certainly agree with both ratings.

Fury is a must-see-on-the-big-screen film and will be a must-own DVD, when it comes out.
Posted by Ted Henkle at 7:30 AM