In my previous post, I discussed the game mechanics in Warhammer 40,000 4th Edition (WH40k 4Ed). I left off without going over the second part of the book, the Background Section.  But before I decided to do a Book & Product Review, I borrowed Dallas' 5th Edition book and read most of it in order to compare the two and discuss the setting of WH40k.  (Note:  The 6th Edition was published nearly two years ago).

This edition is organized a bit differently than it's predecessor.  There's five sections instead of two:  the introduction, rules, background, hobby information and reference material containing victory point listings and quick reference sheets.

I skipped reading the rules in this edition.  Oh, I'm sure there's a modification or three, but I figure I'd learn such things during gameplay--probably after my forces are annihilated.  Anyway, WH40k 5 Ed contains more background information than the previous edition did, which is appropriately titled:
Dark Millennium.

The epitaph at the bottom of both 4th & 5th editions, along with the cover art, provide a good idea of what life--such as it is--in the 40th Millennium is like:

In the grim darkness of the far future there is only war.

Thirty Eight Thousand years from now, the human race rules a large swath of the galaxy and is, in turn, ruled by a comatose emperor believed to be a god and savior of mankind.  The emperor supposedly retains most of his psychic powers thanks to a throne-like life support system.  The daily-to-day details of running the interstellar Imperium of Man is left to the various Latin-titled bureaucracies.

In other words, the Imperium is a gothic, theocratic police state.  Apparently, it's impossible to govern an interstellar empire without inquisitors torturing suspected heretics...

...and commissars summarily executing anyone suspected of treason, or cowardice.

In this perpetual, galaxy-wide free-for-all, you have the Imperium...

...versus the enigmatic Eldar (the equivalent of Elves in fantasy)...


...versus their sadistic cousins, the Dark Eldar (Drow)...

...versus the savage Orks (same as in fantasy realms, but armed with guns)...


...versus the philosophically expansionist Tau...


...versus the monstrous, world-devouring Tyranids (strikingly similar to the creatures in the Alien movies).

And if waging total war against the living weren't bad enough...


...along with the denizens of "The Warp," such as the bloodthirsty Chaos Space Marines...


...and unholy Daemons to deal with.

Now The Warp is an alternate dimension that makes space travel and interstellar communication possible.

It's also where psykers, those blessed/cursed with psychic abilities, draw their power from.  However, using such power comes at a high price:  Insanity, death or the enslavement of one's soul, is often the result when one delves too much into the power of The Warp.

It acts like the Force in the material realm--but without the Light Side.  Theologians today would probably use another term for this dimension of Chaos:

And yet, despite this dismal and foreboding setting, there is some good news--at least for those of us who don't actually live in the 40th Millennium.   All this multi-dimensional mayhem assures gamers that peace won't be breaking out any time soon.  Because "...there is no peace amongst the stars, only an eternity of carnage and slaughter and the laughter of thirsting gods" (cover page, Warhammer 40,000 5th Edition).

As part of the wargaming hobby, the Warhammer line has it's fans and detractors.  I'm rather ambivalent towards the game.  I like the rules' easy mechanics and the ability to utilize this knowledge in the other Warhammer variants.

However, I'm not all that enthused about gaming in this Dark Millennium.  Both editions are lavishly illustrated, often with disturbing and even morbid artwork.  In other sci-fi settings, such as Star Trek, Star Wars, Traveller even the free-wheelin' Firefly, there's always a sense of hope.

There is none in the 40th Millennium.

I guess the Warahmmer 40k 'verse is just not quite my cup of Earl Grey.

Unless of course, someone were to convince me otherwise...

I've known about Warhammer 40K since the late '80's, but I've never delved into it.  Despite museum-quality artistry like this...


...I always thought this range of figures to be a bit over-the-top.  Then there's the "parking lot effect" when using 28 mm figures for sci-fi gaming:

Yes, it looks impressive.  But the battlefield is very congested, like a metropolitan highway during rush hour with every motorist and pedestrian afflicted with an extreme case of road rage.

That being said though, it turned out that 30 years of resistance proved futile.  Several weeks ago, I bought a copy of the Warhammer 40,000 (WH40k) 4th Edition Core Rulebook, because my daughter's boyfriend, Dallas, is into it and--it only cost me $7 plus tax at Half Price Books.

After reading the book, I now understand some of WH40k's  appeal.  The folks at Games Workshop came up with such an easily understandable set of rules with their Warhammer Fantasy Battle that they used the same game mechanics for the 40k version (along with their now unsupported Warhammer Ancient Battles, or "WAB").

The WH40k 4th Ed is divided into two main parts:  The Rules Section and the Background Section.

The Rules Section takes up the books' first 86 pages and provides concise and understandable instructions on how to play the game.  This is broken down into the following subsections:  Introduction, Movement, Shooting, Weapons, Assault, Morale, Characters, Unit Types, Vehicles, Universal Special Rules and Organizing a Battle.

Each unit, which can consist of one character/vehicle or a squad of soldiers, in the WH40k universe consists of nine stats:

Basically, when one player attacks another's unit, a handful of 6-sided dice (d6s) are rolled and the results are compared to the appropriate stat, along with any battlefield modifiers, like units being under cover, to determine if the target is hit, and if so, how badly it gets damaged.

This is often disparagingly called a "buckets of dice" game system.  But it's easy to understand, which is probably why it appeals to younger generations of wargamers, especially to anyone brand new to the hobby.

The Background Section takes up the rest of the book's 270 pages and contains information on WH40k lore and history, along with guidelines on running missions (scenarios) and campaigns.  In game terms this material is often referred to as "chrome," "color," "fluff," "BS," etc.  Whatever gamers call this material, it can provide an entertaining, big-picture perspective for every tabletop battle.

But before I get into WH40k's big picture, I'll pause here and make some final comments on the rules themselves.

The Warhammer class of rules have been around for about 30 years now.  They're fun and easy to learn which is part of what puts them into being more of a game system, as opposed to simulation--even the true-blue historical WAB.

Once a gamer learns one version of Warhammer, this knowledge is easily transferable to the other varieties.

And not having to "learn new tricks" is definitely appealing to some (all?) of us old-dog gamers.

Posted by Ted Henkle at 2:00 PM No comments:


I enjoyed this review so much, I went out and bought this game along with the first expansion Breakin' Atmo.

The next expansion, Pirates & Bounty Hunters is due out next month--which I'll be pre-ordering shortly.
Posted by Ted Henkle at 8:24 PM No comments:

Well, I finally figured out how to work around the browser crashing issue.  Instead of trying to add/edit on Blogspot, do it while on YouTube.  The drawback is--I have a limited number of options available to me, like labels, that I can do.

Anyway, here are some pictures and two very short after action reviews of two Battles of Westeros games my friend Joe and I played a couple of years ago.

The initial deployment of the Clash on Kingsroad: 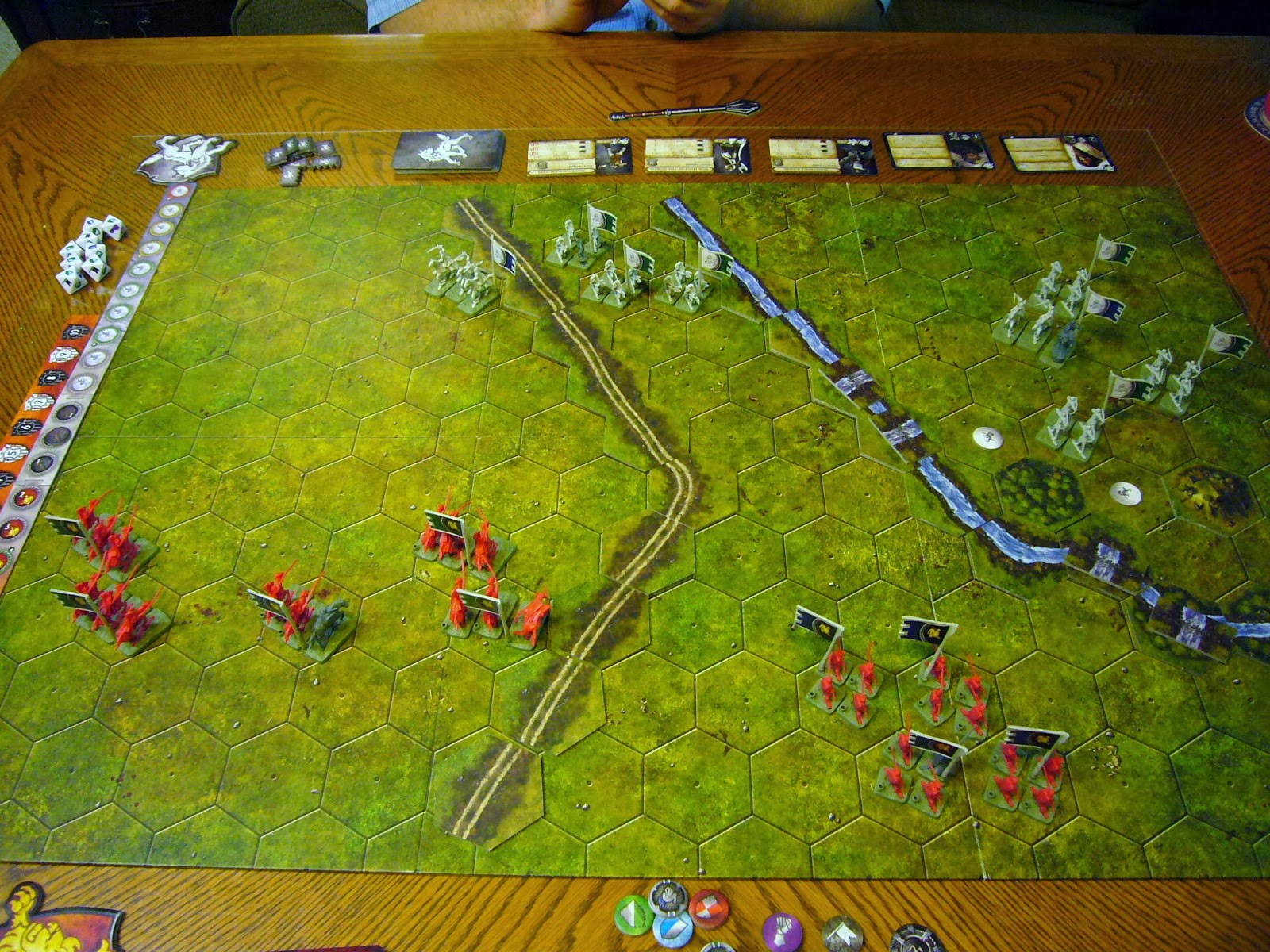 In the end, the Stark forces managed to fight their way across the ford: 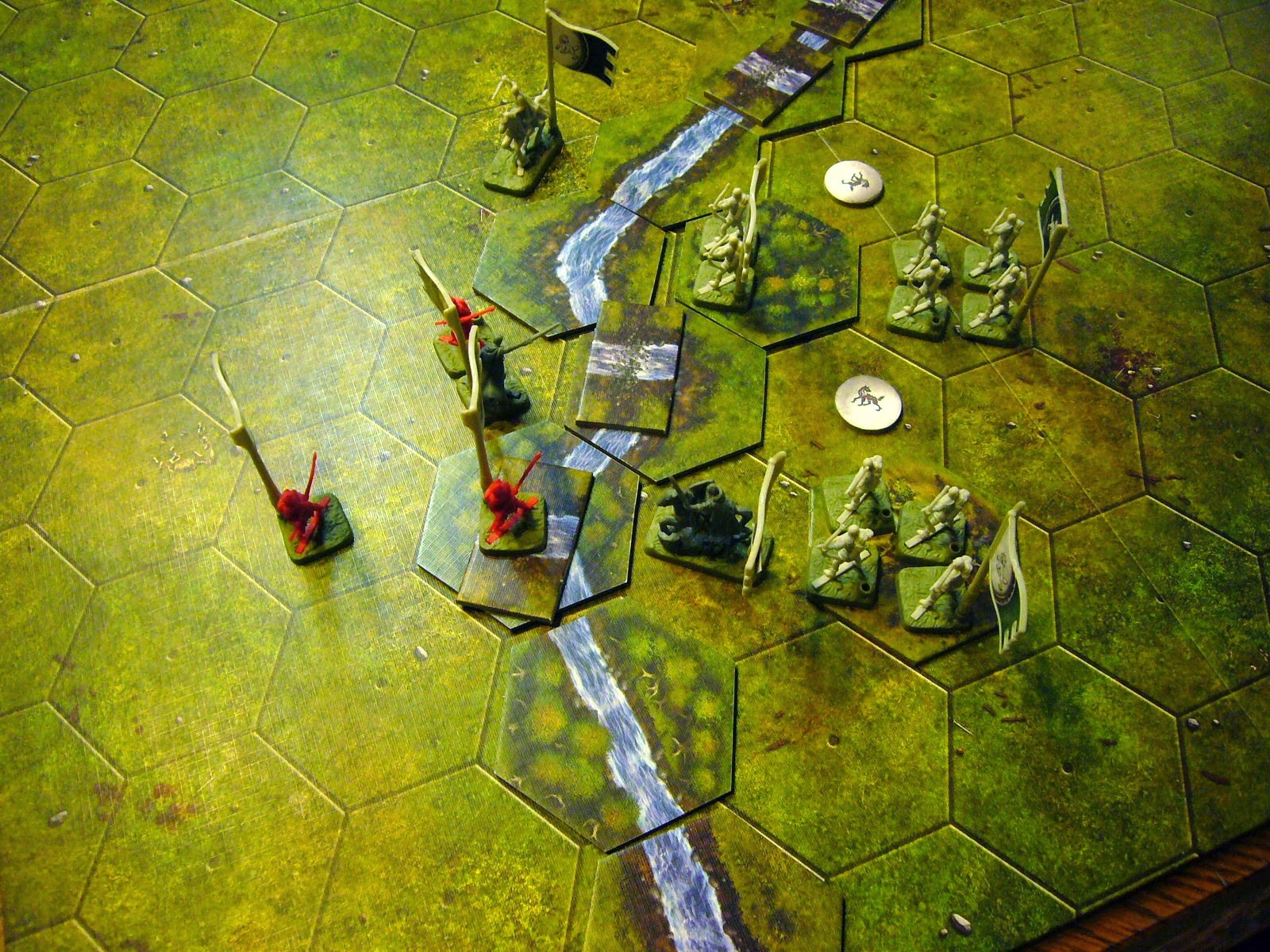 We then played the next scenario, Paying the Piper... 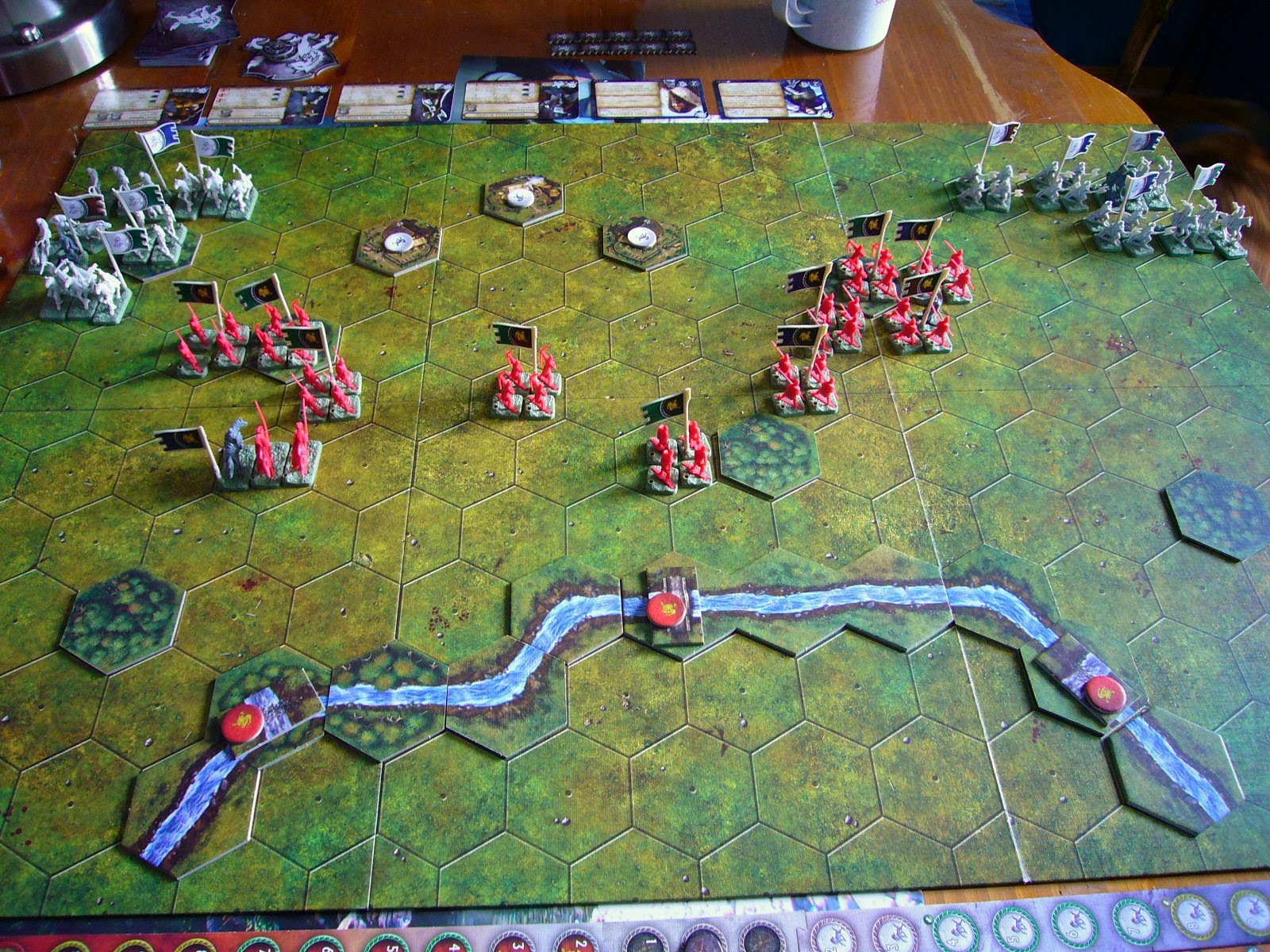 ...which didn't go as well for the Starks as the Battle of Kingsroad did: 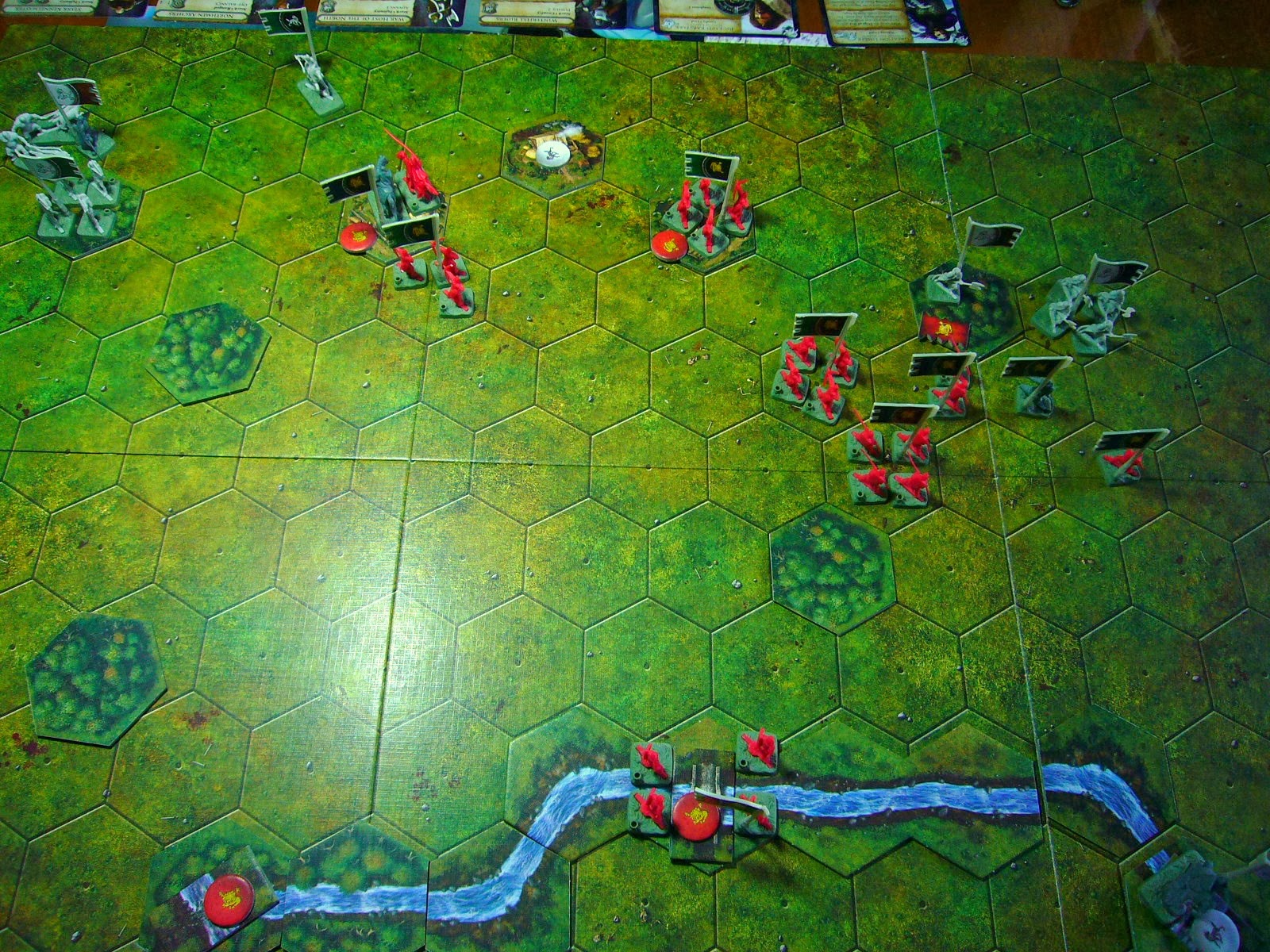 The Starks only managed to seize one strategic objective--one of three fords--while the Lannisters grabbed three out of four key terrain features belonging to the Starks.

Overall, Battles of Westeros is a fun miniature-boardgame hybrid.  The dice rolling to determine how many and what type of orders you get can be both fun and frustrating.