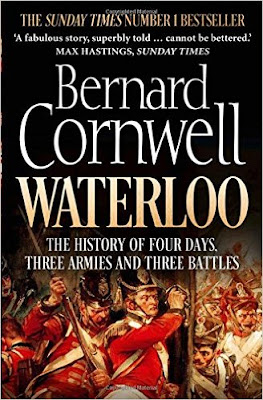 As both a wargamer and history buff, my favorite period is that part of the "Horse & Musket Era," between the Seven Years War/French and Indian War to the Napoleonic Wars.

Napoleon ruled over a continental empire for nearly ten years before he abdicated.  Everyone thought the wars were over, but "The Corsican Ogre" had other ideas.  Escaping his exile on Elba, Napoleon launched his Hundred Days campaign.

But the Corsican's comeback was cut short at the Battle of Waterloo.

Much of course has been written about this climatic clash.

Here in the U.S., Bernard Cornwell's first non-fiction book, Waterloo; The History of Four Days, Three Armies and Three Battles was released about a month before the battle's bicentennial (May 2015, but was released in the U.K. in September 2014).

My wife bought me this book just in time for Father's Day last year.  Since I didn't open my gift until after the 200th Anniversary, I made it a point to read it in time for the 201st Anniversary.

Most of what I've previously read about the battle comes from articles, or chapters in books about the Napoleonic Wars in general.  The only book I did read that was solely devoted to Waterloo was a compilation of eyewitness accounts.  I can't remember the title or author because it was nearly 30 years ago when I read it, and nothing I've seen in my Google-search looks familiar.

Bernard Cornwell is an historical novelist, not an historian.  And this is what makes his contribution to Waterloo lore so readable for a general audience.  True, there are tomes chock-full of facts, figures and statistical data.  These impressive works offer a wealth of information to historians, or any Napoleonic subject-matter expert.

But Bernard Cornwell's literary talents brings the 201year-old drama to life.  Sometimes, especially during the moments when crucial decisions needed to be made, the author will switch the narrative to present tense in order give the reader a sense of "you-are-here-now," and the fate of Europe still is very much in doubt.

I happen to like present tense and use it as much as possible in my own writing.  I'm also a fan of Bernard Cornwell's work.  So overall, I enjoyed Waterloo; The History of Four Days, Three Armies and Three Battles.

However, not everyone is happy with Cornwell's recent work.  Nearly two dozen 1 & 2-star reviewers cited the author's Anglo-centric bias, along with contributing nothing new to the study of the battle.  They also hated the intermittent use of present tense.

I didn't think Cornwell "waved the Union Jack" at the expense of everyone else who fought on that hot summer day.  I felt he was even-handed at directing praise, or criticism towards the leaders and participants.  Although he seemed to have a greater dislike for the Prince of Orange than even Napoleon.

As much as I'd like to give the book a 5-star rating (I'm giving it 4 instead), I felt there were some shortcomings.  Just about every rater assigning less than 5-stars to the book commented on how much the author repeated himself.  Key participants are re-introduced, the term "stone [rock], paper, scissors," is used repeatedly to describe the strengths, weaknesses, and interaction of Napoleonic infantry, cavalry and artillery.  Even the captions underneath the pictures were repetitions of the main narrative.

There are also frequent mentions of the various Waterloo controversies.  Most of these are merely acknowledged and not delved into.

Overall though, Bernard Cornwell weaves an engaging tale for readers looking for an introductory-level overview, or something not weighed-down by exposition and statistical data.

Here's my first attempt at shooting an actual video as opposed to composing a slide show.  I filmed this with my new Nikon P530 CoolPix Camera in video mode.  I staked out a spot on the convention floor, and mounted the camera on a tripod.

The ceremony was in honor of Enfilade's 25th Anniversary and was conducted by the Northwest Scots Guards.

The opening speaker was Lloyd Bowler, the Enfilade Convention Director.

The keynote speaker was Kevin Smyth, former Northwest Historical Miniature Gaming Society (NHMGS) president and one of the founding members of Enfilade!
Posted by Ted Henkle at 6:00 AM No comments:

During this past Memorial Day Weekend, NHMGS celebrated 25 years of hosting it's Enfilade! wargame convention.

Unlike the past few years, I was able to attend all three days.  One of my gaming buddies, Dale, remarked my 3-day attendance was a rarity.

Yes, it certainly was.

This was most fortunate, because the Event Coordinator, Dave Mebust, asked me to be Enfilade's "Official Photographer" for this year.   I responded with my usual, "definite maybe," because of my rotating work schedule.

I didn't play a single game and instead snapped 1,108 raw photos.  The other day, I spent over four hours sifting through them and deleting 350 pictures.  My goal was to take one or two images of the gamemasters and players, then focus on the awesomely painted miniatures and terrain.  The photos I deleted were either blurry, not framed properly, had too much extraneous material on the table (the usual rulers, stat sheets, rule books, soda cans, etc), or a gamer moving his/her pieces just as my camera focused and snapped the picture.

This was also my first time using my Nikon P350 CoolPix Camera, and I was pleased with it's performance.  My only issue so far, is the camera would suddenly announce the battery was exhausted and shut down.  This occurred twice, near the end of the first two days of the convention. I'm glad I brought my old Panasonic Luminix camera as a back up, which in light of this I won't be getting rid of any time soon.

I'm now starting the process of compiling the photos into some sort of on-line format, either a YouTube movie slideshow, or some webcomics.

I don't think of myself as a perfectionist, but I do like to make any adjustments I feel necessary to a picture's lighting and color before posting it anywhere on line.  So it might be a while before my photos reach cyberspace.

In the meantime, while I'm moving at glacial speed, the following wargame bloggers have already posted their pictures and convention recaps:

And a two-parter by Naval Gazing.

First, Other People's Games, and then the games he hosted.

Plans are already in the works for Enfilade 2017.

I hope to finish my Enfilade 2016 photo project by then.