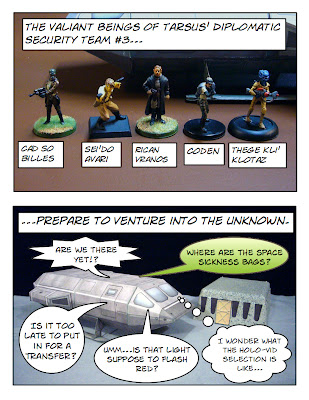 A Game From My Youth 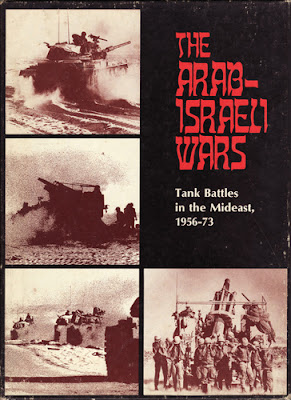 A couple weeks ago, my friend Dan sold me his copy of Arab-Israeli Wars, (AIW) for $10.  I had previously owned this game, but it became a "casualty" in the turmoil of my previous marriage.  So I jumped at the chance to own it again.
My brother gave me my original copy as a birthday present when I was a teenager and we played this game--a lot.  However, my brother always insisted on playing the Israelis.  In all the games we played, I think I won two of them as the Arabs.
So I guess the game is as lopsided as the actual Middle East Wars themselves.  The game was published by Avalon Hill in 1977 and was based on their World War II tactical games, Panzer Blitz and Panzer Leader.
Boardgamegeek offers some information on this game:
http://boardgamegeek.com/boardgame/3218/the-arab-israeli-wars#header
﻿
There's even a Wikipedia entry:
http://en.wikipedia.org/wiki/Arab-Israeli_Wars_(game)
Despite being out of print for for 34 years, used copies are often available on-line and can even be refurbished.  Old Soldiers Magazine, produces updated counters for AIW and other venerable games, wargamers still like to collect and play.  (Click on the Expansion Counters Set button).
http://www.oldsoldiersmagazine.com/
Posted by Ted Henkle at 11:20 PM 2 comments:

Email ThisBlogThis!Share to TwitterShare to FacebookShare to Pinterest
Labels: Wargaming--Modern 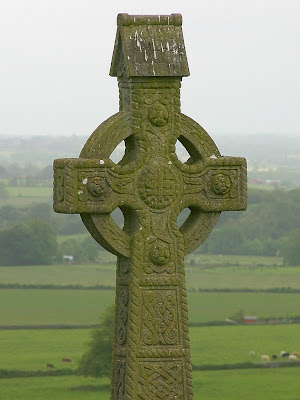 The Best Form of Flattery 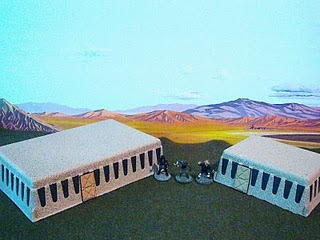 For instance, take a look at my Wretched Hive of Scum and Villainy post from last year:

﻿
http://sternrakestudio.blogspot.com/2010/05/wretched-hives-of-scum-and-villainy.html
Now enjoy a lively tale of a "bug hunt" based on the movie--you guessed it--Aliens, brought to you by the Fawcett Avenue Conscripts:

http://wpggamegeeks.blogspot.com/2011/03/just-another-bug-hunt.html
Notice anything familiar?
I must admit, my cunning plan for building a "Sterilite Slum" wasn't original.
I copied it from a wargamer who posted an after action review of his sci-fi wargame.  In his table top battle, he used unadorned Sterilite storage containers as buildings.  I'm afraid I can't remember who the artistic genius is, so I could give him due credit.  He may even be one of the guys on Fawcett Ave.
Hmm. Or maybe Fawcett Ave guys, in turn, copied the idea from me?
Oh well, regardless of who copied what from whom, inexpensive office supplies are an ever-popular source for a wargamer's construction projects.
Posted by Ted Henkle at 4:45 PM 2 comments: 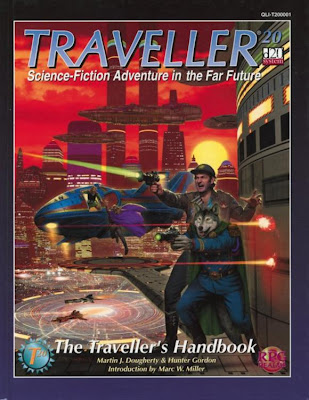 (Image:  Book cover to T20 Traveller, by QLI/RPGRealms Publishing)
Wargamers are often like chefs.  That is, when it comes to setting up games for their buddies, they'll take ingredients from a published game, mix it with a second, or more products and--voila!--create something unique.  "Kmfrye2001," author of the Tempest in a Teapot blog, did just this by putting together a wargame set in the universe of Traveller, but using the Stargrunt II rules, to resolve combat. 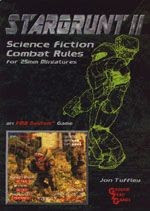 (Image:  Book cover to Stargrunt II, by Ground Zero Games)
Tempest in a Teapot's After Action Review (AAR):
http://tempestsinateapot.blogspot.com/2011/03/vland-in-can_05.html
Notes:
Traveller, designed by Marc Miller and published by Game Designers Workshop (GDW), has been a popular science fiction role-playing game (RPG) since it was published in the late '70s.
http://en.wikipedia.org/wiki/Traveller_(role-playing_game)#Traveller_or_Classic_Traveller_.281977.2C_GDW.29
I've been playing Traveller--or at least, collecting the books--since I was a teenager, so it has been a part of my gaming life ever since I started got into the hobby.
There's been several variations since Traveller debuted in 1977.  For the past 3 years, Mongoose Publishing has been releasing revisions of the classic Traveller rules and supplements:
http://www.mongoosepublishing.com/home/series.php?qsSeries=51
Stargrunt II, by Ground Zero Games, is a popular set of sci-fi skirmish rules:
http://www.groundzerogames.net/mambo/
Posted by Ted Henkle at 11:45 PM 3 comments: 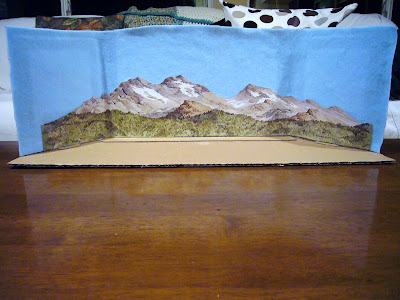 While I haven't completed the finishing touches on my first "miniature stage" yet, I decided to start on the second one anyway.  This time, I used a Clone Wars Battle Set box, from Wizards of the Coast, as my frame.  I followed nearly the same procedure I mentioned in All The World's a (Miniature) Stage post, except on this occassion, I changed the order in which I applied the different materials.
The first thing I did, was to slather on some glue to the box's sides and past the blue felt sky to it.
Next, I selected a distant mountain range for a backdrop, slathered glue on the back of it and pasted it against the sky. 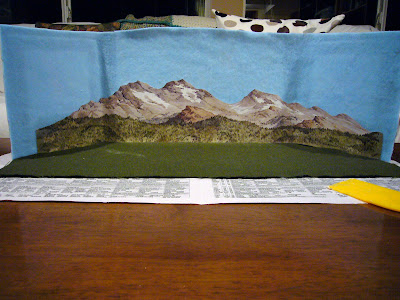 After letting the sky and mountain range dry for 30 minutes, I carved-up another piece of the old army blanket I've been using and configured it to fit the base of my stage. 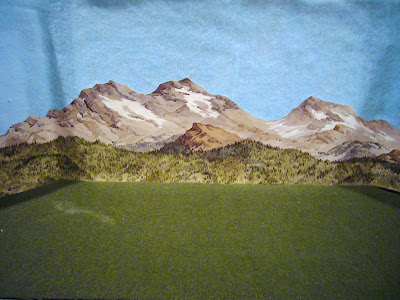 And--voila!  A framed shot of my new stage.
Uh-oh.  It looks like I left some glue to dry on the blanket.  (Sigh).  I'll try covering it up with some appropriate flocking later.
By installing the sky and backdrop first, the crease between the ground and the horizon isn't anywhere near as noticable, as in my first stage.
The project dried completely within several hours.  When I examined it, I noticed that the bottom had curled somewhat, so the stage doesn't sit evenly on a flat surface.  I'm assuming the carboard on this box isn't as thick as the Hoth Box I used in my first stage project.  Since I intend to use this stage for smaller figures, like 6mm, I don't expect this to be a problem.  (I hope).
Posted by Ted Henkle at 9:00 PM 2 comments: