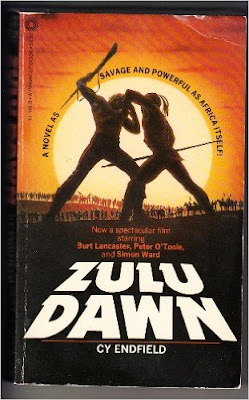 After writing my double feature movie reviews last month, I decided to finally read the old copy of Zulu Dawn that's been occupying space in my library for, oh, I don't know for how long.

Zulu Dawn was written by Cy Endfield, who co-wrote the screenplay of the same name.

The book provides in-depth character backstories and introspection, as well as a more detailed narrative about the chain of events... 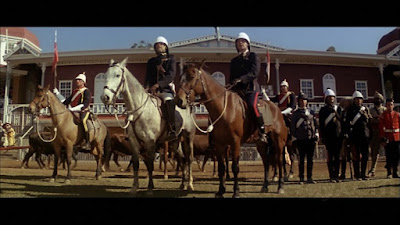 ...that led up to the Battle of Isandlwana... 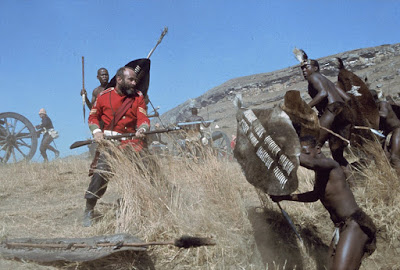 ...along with its immediate aftermath.

Many of the scenes play out differently in the book than in the movie, but end with similar, if not identical results.

The Zulus themselves have a greater role in the book.  This part of the story focuses on the young warrior Bayele, who is selected for one of many scouting missions.  When he returns with news about the British invasion, he's chosen to lead a deception operation by allowing himself, along with two others, to be captured.  Only after getting thoroughly roughed-up, he and his comrades try to mislead the British about the location of the main Zulu army. 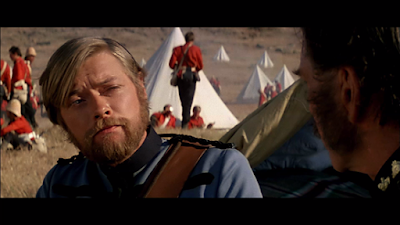 ...who's fate in the movie was never clarified.

Since I like the movie, I liked the book, even though it doesn't even show up on a Google search for the best books about the Battle of Isandlwana.

While Zulu Dawn may not be the most scholarly work, Enfield's narrative is very readable, especially when describing the chaos of battle.  Plus, after watching the movie so many times, it was easy for me to visualize the story.

Zulu Dawn gets a sunny 4-star rating.
Posted by Ted Henkle at 7:30 AM 4 comments:

For this Valentine's Day, I thought I'd hijack utilize images along the lines of Stern Rake Studio's webcomics and wargaming theme.

Happy Valentine's Day!
Posted by Ted Henkle at 12:30 AM No comments:

I was hoping to get some gaming projects completed before I went back on duty.  Unfortunately, the amount of home projects and snow removal took up most of my time.

Despite my time constraints, I managed to organize my "new" miniatures into two of my "new" display cases.

Technically, the figures and the furniture aren't new, but they're new to me, or have been put to new use.

For the past year, I've been buying painted miniatures from fellow gamers in my area, especially my talented friend Dean, host of WAB Corner.

I've been wanting to post pictures of each new acquisition, but first things first, I needed a place to put them.

During the summer, my wife and I reorganized our DVD collection and assembled some wall-shelves we got from my friend Joe when he moved.  This freed-up a display case for my prized figures to reside in.

My wife bought the second display case, seen in the led photo, at a garage sale.

Once the necessary household chores were complete, I spent an afternoon sorting through figures and placing them in the cases.  A few figures will require some "super glue surgery" because I dropped them, or didn't pick them up properly.

Once I get some additional time off, I plan on doing a series of photo shoots to show off my new-found figures.

A couple days ago, my wife and I took a road trip to south-western Oregon to visit an elderly friend.

We returned late Saturday night, and a good thing too.

It snowed all day yesterday, which started accumulating on the roads by mid-afternoon.

By early morning today, we had several inches of snow in our neighborhood, while schools across the region closed or delayed opening.

Here's a photo gallery of Snow in Seattle.

I've been hoping to post some game-related material this week.

But for now, I'm too busy shoveling...