Last year, we had a 100-piece bag of candy, and ran out before we planned on turning in.
I ended up giving out cocoa packets from my stash of Starbucks Double Chocolate Hot Cocoa.

This year, we bought a bag of 155-pieces of candy--along with cocoa, this time from Nestle, and hot cider packets specifically for trick-or-treaters when the 100th piece of candy is gone.

While I posted about our Enfilade Convention's Silver Anniversary Ceremony four months ago, it's been over two years since I made a gaming video.

So last week I decided to get back on track and start sifting through the 1,100+ photos I took during the convention and start composing some themed videos.

I thought it be appropriate to start off with a shout-out to one gamemaster (GM) who hosted a Zulu War or Boxer Rebellion game during every period.

I don't know how Bill does it every year.  I ran three games back-to-back a few years ago and I was mentally exhausted.

Late Commenoration for the 950th Anniversary of the Battle of Hastings

I was off-line for a couple of days, hunkering down for a storm that fizzled, so I missed commemorating an important anniversary in military history.

"Number Eight" of the The Fifteen Decisive Battles of the World (Hastings) was fought nearly a millennia ago, on 14 October 1066.

Over the weekend, a thousand re-enactors participated in celebrating the battle's anniversary.


For us non-re-enactors, our familiarity with the Battle of Hastings looks more like this, reading from the warmth and safety of our homes:


Or, for talented wargamers, (of which I am not one of them), the battle is an embodiment of "War is Glorious" on our tabletops:

And for us YouTubers, Kallistra Ltd produced a video of their tabletop battle just a few years ago.

If I'm still around--and cognizant--in 2066, I'll try to be more timely in posting about the Millennial Anniversary of the battle.
Posted by Ted Henkle at 12:30 AM No comments: 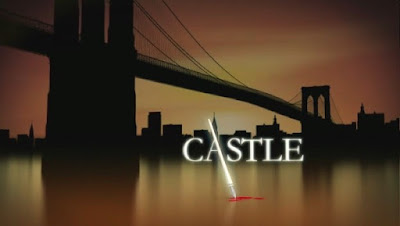 My wife loves Police Procedurals.
I'm a Firefly fan.
Together, we binge-watched all eight seasons of Castle!

Prior to our binging, I heard a lot of good things about Castle, and figured the show would be something we'd both enjoy. So I bought the First Season DVD set several months ago.   Seven additional DVD sets later, we finally finished Season Eight last week.

Richard Castle is a best-selling mystery writer (and Bumbling Dad).
Kate Beckett is an ace NYPD detective of the 12th Precinct (and Broken Bird).
Together, they fight crime! 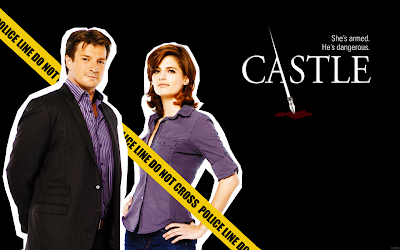 Yeah, I totally borrowed the TV Tropes format for my opening line here.

Anyway, Richard Castle weasels his way into job-shadowing Detective Beckett after helping her and her team of homicide detectives solve a series of copy-cat murders, based on one of his books.  Sparks fly for the first three seasons.  Castle's initial excuse for hanging around was that he found inspiration to write a new series of books about Detective Nikki Heat--based on Detective Beckett.  By Season 4 romance finally blooms, even though it was obvious to everyone around them, that they're a perfect pair.


In between all the will they or won't they? the mismatched duo endeavor to catch the victim of the week's killer.

What delighted me most about Castle were the actor allusions to "Firefly."  However, the show went beyond appealing to sci-fi fans.  Just about every episode contained shout outs to numerous TV shows, movies and comics.


I like Nathan Fillion as an actor, and what I envied most about his character was his relationship with his daughter Alexis.  I found myself imagining being the same kind of dad towards my daughter if she lived with me instead of my her mom.  Of course, without the financial fortune, jet-set lifestyle and fangirls throwing themselves at me.  I also liked Castle's generosity towards his new-found friends.  If it wasn't in the precinct's budget--or inside it's rules of ethics--Castle would write a check for anything from paying a ransom to hiring a prostitute (in order to interview her for the case of the week, of course).  He even bought an cappuccino maker to replace the precinct's bad to the last drop machine.

However, my favorite characters on Castle turned out to be heterosexual life partners Ryan & Esposito.  On-stage their relationship often mirrored Castle & Beckett's, and from the snippets I've seen, the actors seem to have the same dynamic going for them off stage as well. Each of them had at least one day in the limelight episode that was truly memorable.

As is usual with every TV series ever created, the main characters do everything.  In this case, a metropolitan police district's homicide unit was comprised of three detectives, plus a tag-along.  Not to mention putting said tag-along in harm's way on a routine basis.

And since this cadre was critical to fighting crime, we knew the writers weren't going to kill off the main characters.  Besides, we had all eight seasons worth of Castle DVDs.  So we found each story to be more amusing and interesting, rather than exciting.

The biggest problem, however, was arc fatigue.  Castle was more than just an episodic dramedy about romance, and the body of the week.  There were numerous story arcs, which took more than one episode to complete, and many of these in-turn, would span several seasons.  In fact, half of them were linked to each other in some way or another.  These shows were darker and edgier stories, and were our least favorite.  Watching these required viewing one--or usually more--breather episodes in order to prepare ourselves for the next downward spiral.

By the last episode of Season 7, several Big Bads have been killed-off or incarcerated, and Richard Castle finally won a coveted literary award.  Things were looking up for everyone else, who've finally become a band of true companions...and then they get the adventure continues phone call, because another murder has been committed.


This, however, turned out to be a series fauxnale.  The man behind a Big Bad, known as "LOKSAT," emerged.  Most of the stand-alone shows were tainted by the LOKSAT Arc.  Episodes completely devoted to thwarting LOKSAT were tedious to watch, and the season finale struck a sour note with fans everywhere.  It was obviously intended as a cliffhanger.  But at some point in production, when it was clear there wouldn't be a Season 9, a seven years later scene was slapped on to give Castle & Beckett a babies ever after ending--and something for fans to coo about.


Except fans reacted with more boos than coos.  So much so, that many (all?) Castle fans have mentally written-off Season 8 in it's entirety.

TV Tropes has an entire list of Castle clunkers on it's Your Mileage May Vary Page, along with some headscratchers.

Overall though, I think the show is awesome.  Just how awesome?  Well TV Tropes has a list of awesome Castle moments, along with the funny and heartwarming ones.

I'm now as much a fan of Castle now as I am of any sci-fi or fantasy program. Castle now has a fictionalized and even defictionalized expanded universe.  That is, there are now several real Nikki Heat novels...


My wife bought me the first two Derrick Storm graphic novels, which I haven't read yet.  I'll probably ask for the first books in both the Derrick Storm and Nikki Heat novels next.

So Castle will live-on long past its cancellation.

TV Tropes also has a page listing every Castle-related trope from A to Z, a character page, along with a episode recap page (which is incomplete at this time).

In addition to TV Tropes and Wikipedia, there's the following Castle sites: 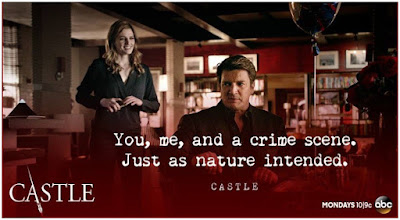 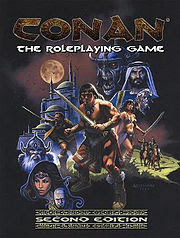 I've been a fan of Conan the Barbarian ever since I started sporadically reading the comics back in the '70s.

I saw the original movie when it came out...

...but have skipped the 2011 box office bomb.  Although I do have the DVD, which I still haven't watched yet, in order to complete my Conan movie collection.

So as a role playing game (RPG) enthusiast, I was happy to stumble across an inexpensive copy of  Conan: The Roleplaying Game (2nd Edition), produced by Mongoose Publishing.

This 420-page tome is divided into the following chapters:

The book also includes a two-page character sheet, and color maps of Hyboria inside the front and back cover. 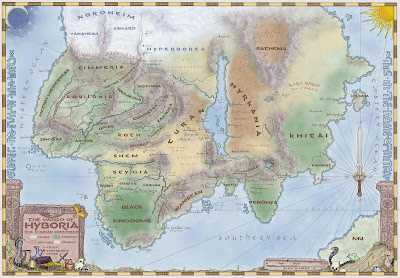 If you're familiar with Dungeons and Dragons, or any other "D20 Open Game License (OGL)" game, then you'll find Conan:  The RPG easy to understand, because the game mechanics are identical.

Since I like the D20 System, I look forward to the day when I can either run a session as a gamemaster (GM), or participate as a player character (PC).

While I enjoyed reading the Fluff about the late Hyborian Age, at the time Conan is king of Aquilonia, this was a difficult book to read.  Not because the content was hard to understand, but due to the poor quality of the materials and layout.

I like reading hard cover books like this while I'm working out on a stationary cardio machine.  It alleviates the boredom.  However, I couldn't lay this book flat and read it without holding it with my hands, which makes working out more difficult.  When I tried pressing the book flat--the binding ruptured.  Fortunately, the pages didn't come loose.

There's also the problem with the page format.  Each page is illustrated with the same racy, black and white montage artwork along the borders.  (Apparently this was suppose to be an improvement over the scandalous full-color artwork).  As a result of keeping the artistic border, the print is set very close to the spine, making it even harder to read anything within the center of the book.  Also, the pages themselves also feel flimsy and composed of cheap paper.

Despite these quality-control flaws, I'm glad I have this in my RPG collection, as long as I don't read it from cover-to-cover again.  Content-wise, I'd rate the book at 4-stars.  Quality-wise, I'd give it 2, maybe 3-stars.

Conan:  The RPG received high praise on RPG Geek, and  snagged a 4.5-star rating on Amazon.com.
The two 3-star raters didn't care for the game using the D20 system.

The new Conan: Adventures in an Age Undreamed Of should have been released a few months ago.  Because of this new release, it seems that the Conan: The RPG (2nd Ed) and other Mongoose Publication material is available for (free?) download.