Inspired by the Classics 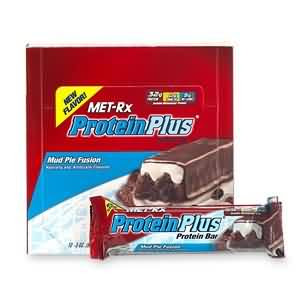 To be honest, I can't remember when I last read anything from the classics.  In fact, my personal theme turned out to be: "When all else fails, read the instructions."  During the conference I had a bad habit of not thoroughly reading the conference's schedule book--like the note about lunch stands would not be open on the first day (Thursday, 22 July).

In previous years, the first day focused on registration with a few afternoon classes as appetizers.  This year the conference opened with Bob Mayer's One Day Novel Writing Seminar.  Unfortunately, it wasn't until our lunch break that I realized I had to fend for myself to get food.  The hotel's coffee shop and restaurant were quickly overrun by hungry, aspiring writers.  Instead of fighting my way through crowds I decided to grab a snack at the Airport Hilton's gift shop.

Normally, I'll eat a nutrition bar prior to working out, but this was a case of desperate times calling for desperate measures.  I found a bunch of them on a shelf weighing from 1.25 up to super-sized 3.25 ounces, like the Met-Rx "Mud Pie Fusion," pictured above--all for $3.99.  For this price, I figured "bigger is better" and I would burn off the 410 calories in the form of nervous energy during the afternoon sessions.  Despite the high caloric intake of this super-sized protein bar, I felt I needed one more snack to hold me over until dinner.  So I added a bag of Planter's Honey Roasted Peanuts to my food-group.  I was initially going to buy a bag of plain peanuts, but they were both on sale for the not-so low-low price of $3.99.  So I applied the same logic as I did with my nutrition bar choice.

This certainly wasn't the "lunch of champions," writers, or any other normal human being for that matter.  While I didn't have to worry about hunger pangs for the rest of the day, I did go home feeling ill at the conclusion of the afternoon sessions.  In doing so, I missed the first keynote speaker Andre G. Dubus III, best known for his novel House of Sand and Fog.

PNWA's 2011 conference will be moved to the Hyatt Regency in Bellvue, which our president Pam Binder, promises will be within easy walking distance of local restaurants.  Hopefully, by that time, I'll have read all the details regarding next year's event.

In the coming weeks I'll post recaps of the workshops I attended and any other noteworthy anectdotes that occurred during the conference.
Posted by Ted Henkle at 10:00 PM No comments: 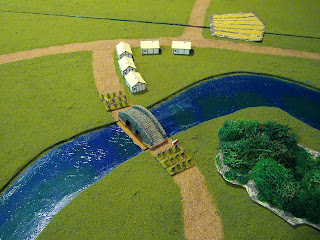 With two sections of my terraformed terrain boards complete, I thought I'd see how some of my 6mm figures looked on them.
Pictured above are warbands of Normans and Saxons, on the near and far shore respectively, face-off against each other across a bridge. The figures, I believe, are from Heroics and Ros, which I bought in Germany back in the '90s.
The bridge is from JR Miniatures, while the thatched-roof hovels are cardboard models downloaded from Eric Hotz's Roman Seas. 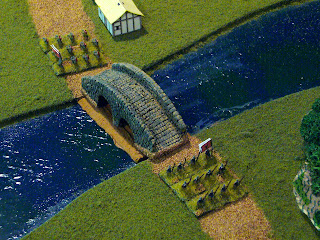 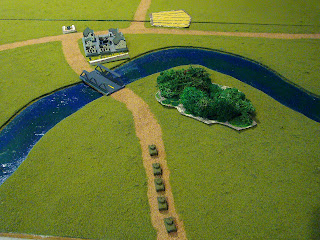 The American tanks, German infantry and 8.8 cm FlaK gun are from GHQ; the cobblestone square is from JR Miniatures; while the burned-out buildings and the fortifications, are from Scott Washburn's Paper Terrain.  Below is a close-up of the advancing Sherman platoon: 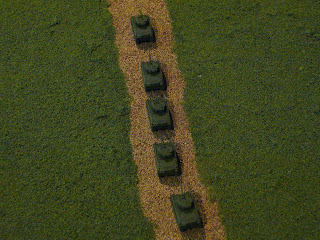 A close-up of the town and defending German infantry: 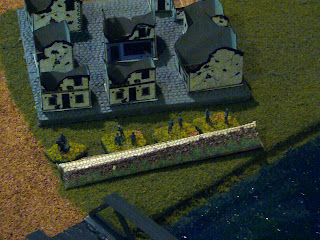 While in the not-so distant future, a column of New Anglican Confederation (NAC) tanks attempt to secure a power plant currently defended by power-armored infantry and combat vehicles of the Neu Swabian League (NSL): 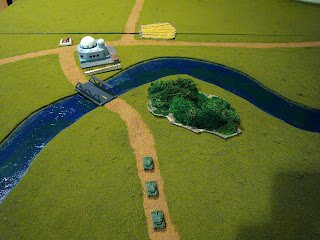 The miniature tanks and infantry are from Ground Zero Games: 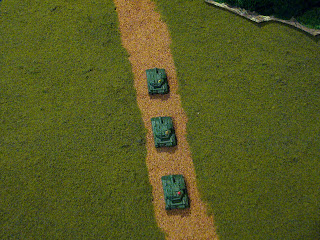 The power plant is from JR Miniatures, while the bridge, used in both the WWII and sci-fi pictures is scratch built: 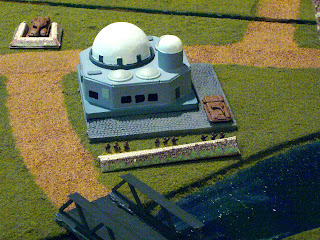 This terrain board was a little "too green" for me to pose my Arab & Israeli tanks, while my Greeks & Persians, along with my fantasy figures, have yet to be painted. Despite these historical and a-historical gaps, one can still see that some thing never change...
Posted by Ted Henkle at 9:00 PM 3 comments: 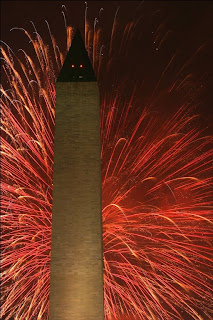 My favorite commentator, Mark Steyn, delves into the origins of the song "God Bless American."