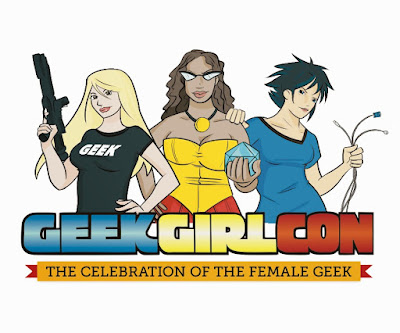 While GeekGirlCon bills itself as "the celebration of the female geek," men attended and made a good showing among cosplayers at this year's convention.

My first encounter was with Charles Arrasmith (a.k.a. The Omnus) looking badass as Bucky Barnes/The Winter Soldier. 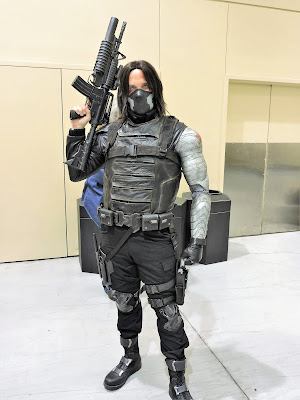 Now this teenager, who was with his family, put on some Spider-Man poses. 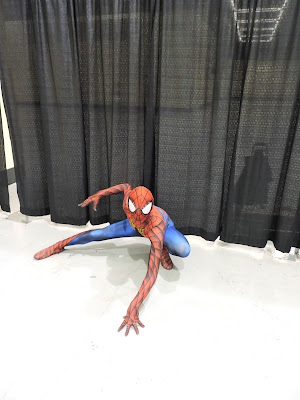 I had to tell him "okay, thanks" otherwise he would have kept on posing.  His mom told me he practices all the time.  His practice certainly paid off. 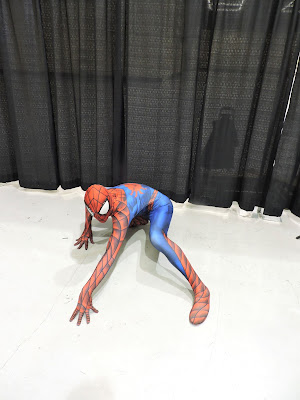 I'll end the "men's category" with a sinister, but debonair flourish with this picture of
Jareth the Goblin King. 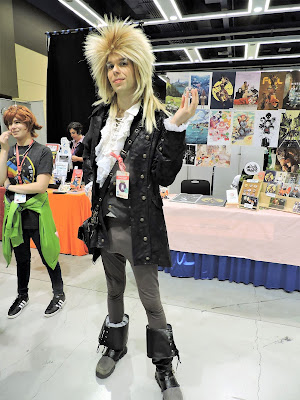 And now for the Women's Category:

I'm not sure who this woman was suppose to be, but her costume was striking.  There were several of us snapping pictures of her. 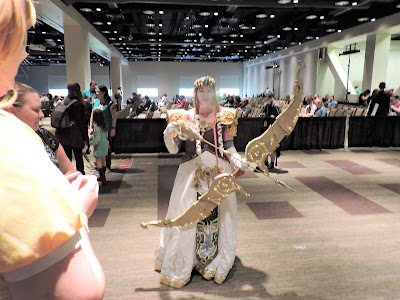 Okay, now here's a cosplay character I recognized--Natasha Romanova (a.k.a. The Black Widow. 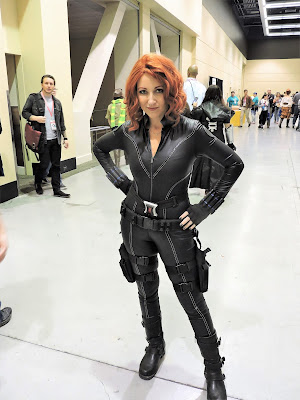 Several crossplayers were also attended.  This woman impressed me with her Indiana Jones, not because I've dressed as Indy (okay, that's part of the reason)... 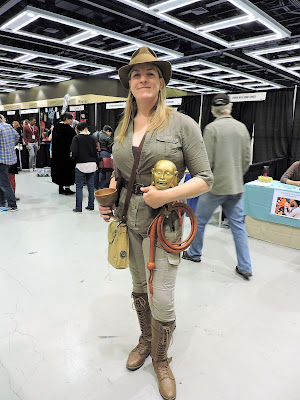 ...but I loved all her props!  The Golden Idol was a piggy bank she found in Thailand or Japan (I forget which).  Her Holy Grail was half-filled with water, and her Headpiece to the Staff of Ra was printed on both sides. 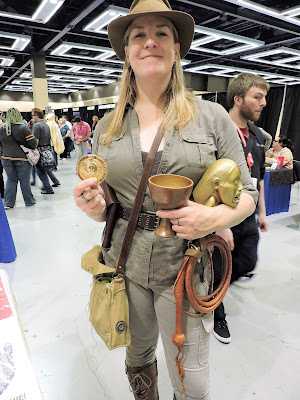 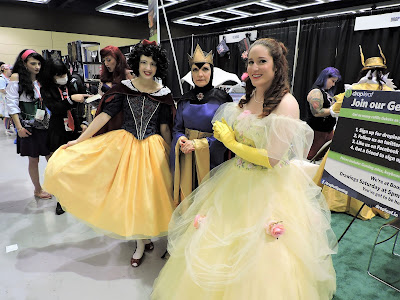 I ran into Belle a couple of times and had to give her wide birth because of her ballgown.

Now here was an odd match up:  Snow White, the Evil Queen and Lara Croft. 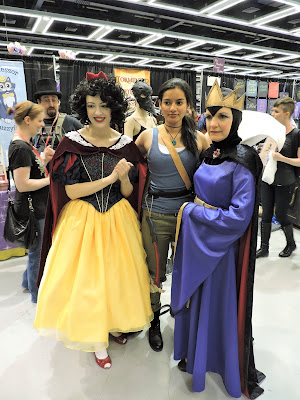 Here was a mother and daughter dressed as steampunk versions of Pokemon characters. 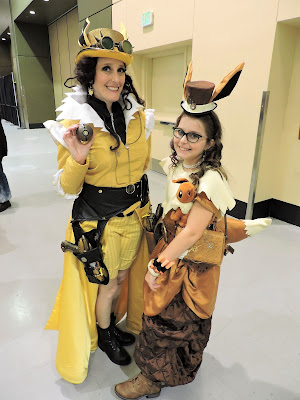 Right after the Cosplay Contest, I ran into this badass Merida and told her she should have entered the contest. 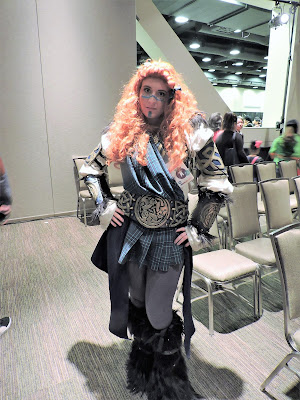 She said she found out about it too late to sign up.

The only "Couples' Category" I managed to encounter was Black Widow paired-up with Thom Cruz as Red Hood, whom I've never heard of until I looked him up for this post. 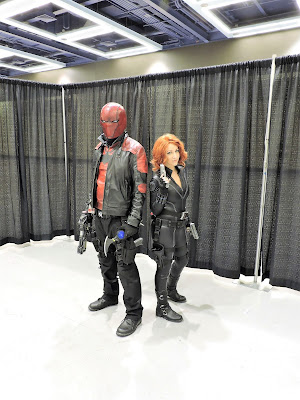 I didn't by too much merchandise. However, one item really caught my eye.  This Exasperated Woman Switchboard Operator poster from RxLetterpress.  I even had the artist, Emily Riley (holding the picture) and her friend sign it. 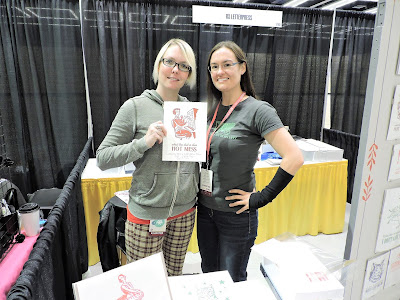 Since I got my boss's approval, I plan on framing it and hanging it up at work.

The Cosplay Contest drew practically a standing-room-only crowd.  I found a seat on the stage-left end. 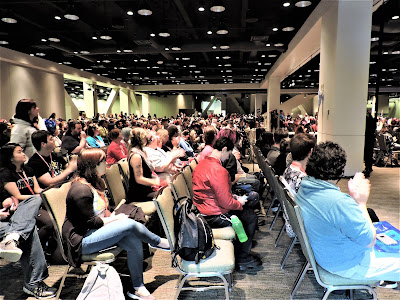 The lighting was dim, and I still suck at taking action photos.

But here's the best one I managed to take featuring our emcee,  Lauren (a.k.a. Random Tuesday) seen below in the fairy costume holding the microphone: 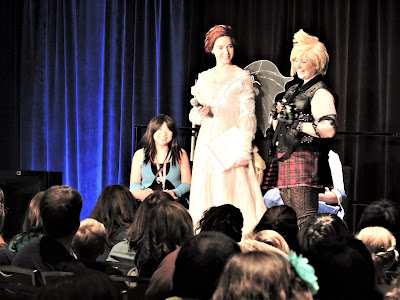 Here's one of the little girl in the steampunk Pokemon costume: 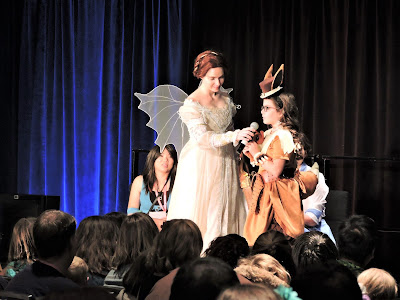 And this is best picture I took of our finalists, along with our emcee and judges (on the right): 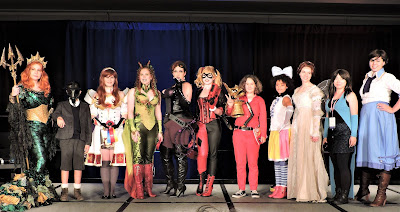 Since I had to work the following day, I left shortly after the Cosplay Contest.