Best wishes to all our veterans, along with my thoughts and prayers for the family members our fallen heroes left behind.
Posted by Ted Henkle at 12:30 AM No comments:

For members of the Northwest Historical Miniature Gaming Society, (NHMGS), Memorial Day Weekend is when our flagship convention, Enfilade!, is held.  In the past, we've been able to fill nearly all the tables and host about 120 games during the course of the holiday weekend.  Unfortunately, as of now, we're just shy of 100 games and we're expecting record-breaking attendance.
After the third, or fourth, "call-to-arms" my friends Adrian and Dean issued for gamemasters, I volunteered to run, not one, but three games.  Which by the way, will be my first time I'll be hosting a convention game.  (A future blog post might be on "How Not to Have a Nervous Breakdown at Game Conventions)

I was looking for a set of rules to use for mass combat in my Star Wars Redshift Chronicles campaign and came across the "Commander Series" by Specialist Military Publications (SMP).  I figured if I could learn these rule systems, I could run my own Star Wars game better. 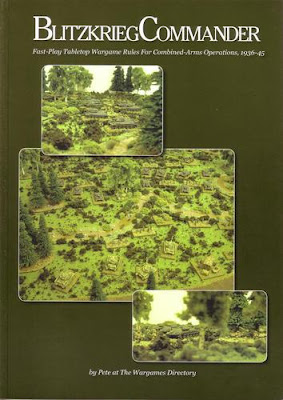 Blitzkrieg Commander, SMP's first product, which is advertised as a "fast play" set of WWII wargame rules.  While the book weighs-in at 120 pages, the core rules only take up 32 pages and that includes illustrated Examples of Play.  The rest of the book is comprised of Army Lists which illustrate unit types, movement rates, attack strength (the number of dice rolled), how much damage a unit can take ("hits"), the availability dates and other asundry of data.

The rules are organized around the game's Sequence of Play, with chapters discussing the Scheduled Phase (for artillery and airstrikes), Initiative Phase (where units can act on their own), Command Phase (where headquarters and commanders issue orders) and the End Phase.  In between the "phase chapters" are sections on Movement, Firing, Artillery and Air Support, along with Close Combat, Engineering and Minefields.

The basic premise of the rules are simple.  A unit type rolls a given number of six-sided dice (1d6s) to attack another unit.  Such attacks are successful on a die roll of 4, 5 or 6.  However, this depends on the terrain the target unit is in.  A target unit can only take a given number of hits, before it is knocked out and removed from the playing table.

Blitzkrieg Commander (BKC) was popular enough that SMP issued the first "spin off:" 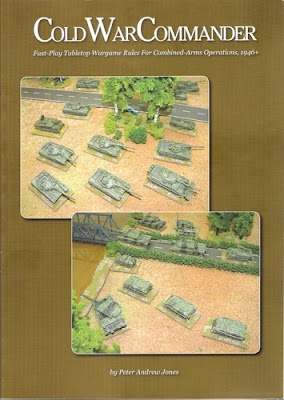 Cold War Commander, (CWC), covers the Post-WWII era, from 1946 until today-ish.  The game mechanics are nearly identical, but with some extra added features found in modern combat.  Weapons such as helicopters, anti-tank guided missiles, speicalized (and deadly) artillery and aircraft munitions and differing tactical doctrines employed by the armies of various countries.

Last of all, there's the "final frontier:" 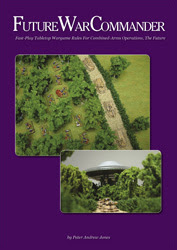 Future War Commander, (FWC), deals with the "what if?" conflicts popularized in science fiction.  Unlike its predecessors, the Army Lists in FWC are based on the current availability of sci-fi miniatures and figures.  So you'll find topics about combat vehicles such as "walkers" and "grav armor," along with devices such as adaptive camouflage, shield domes, plasma and cryonic weapons.

So in preparation for Enfilade, I read each of the rules.  Twice.  While I may not be an expert at these rules, especially since I've only played CWC once at Enfilade 2010, at least my rulebooks are well highlighted.  In fact, the pages are more yellow than white.

After pouring over each book, here's my pre-Enfilade assessment:

1. As I mentioned earlier, the rules are simple (4,5, or 6 hits the target).  The Command System is also based on rolling 2 d6s.  A successful dice roll means a commander, or headquarters element can issue an order to a combat formation.

2. But what I like most about these rules are the extensive Army Lists.  Some game companies publish a core rulebook and then if you want detailed information on the various combatants, you have to anxiously wait for--and buy--their supplements.  The all-in-one Army Lists are especially helpful to my work in my Redshift Campaign.

3. Lavishly illustrated Examples of Play.  These sections are a great help in understanding each rule concept.  If you're already familiar with similar rules, then you can skip these parts, which makes reading these rules much faster.

1. These rules are a "buckets-of-dice" system.  That is, you can combine all the attack dice of every unit firing at a target and roll them altogether.  While I don't particularly hate a system like this, a lot of my gaming buddies do and this makes it hard for me to muster-up any enthusiasm for playing these games.

2. Armored units get a "saving throw" when attacked.  Which means the defender gets to roll a fist-full of dice to determine whether or not his lead tank "brews up" or not.
3. The rules cover a lot of concepts in a short amount of pages, which means a lot of detail is lacking.  In other words, these are "game" rules and not "simulation" rules.  So a lot of similar units have nearly identical combat capabilities.

After my extensive studies, I enjoyed gaining the familiarity with SMP's products and I'm happy I purchased them.

As for my Enfilade preparations:

Due to my work schedule and other commitments, I won't have time to play test these rules before the convention.  How each of my game sessions pan out will be for a later blog post, so stay tuned...
Posted by Ted Henkle at 5:25 PM 3 comments:

Wikipedia has a short synopsis on the origins of Star Wars Day.
Posted by Ted Henkle at 8:00 AM No comments: