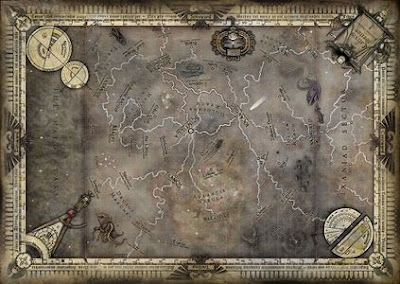 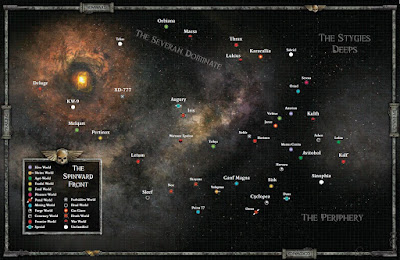 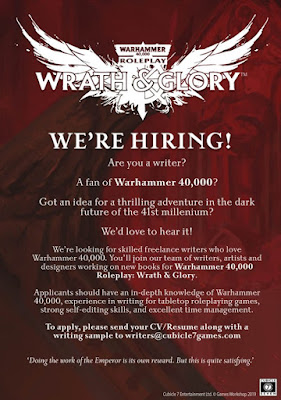 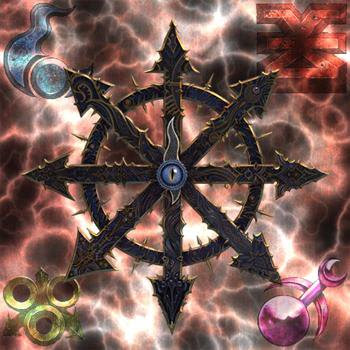 When it comes to miniature wargaming; ever since I joined the military, I've felt compelled to collect multiple factions of miniatures.  I have my own World War II and Modern Micro Armor, consisting of vehicles from nearly all sides.

I've done this because I'd often be located in an area with few gamers and it would be up to me to provide both of the opposing factions' figures.

I'm no longer "globetrotting," but I work a rotating shift. Which means more often than not, I'm a "no-show" for scheduled gaming events.  I also like to concoct webcomics based on miniature gaming.  So I like to have an opposing faction on-hand for a photo-shoot, or even the rare game.

This has bled over into my Warhammer 40K collection.  The bulk of my figures and vehicles come from the ranks (upon ranks, upon...) of the Astra Militarum--the common foot-soldiers of The Imperium of Man.

But for the past couple of years, every time I purchased stuff at a game store, usually The Game Matrix, I'd pick up a small, 5-figure box of easy-build Chaos Cultists... 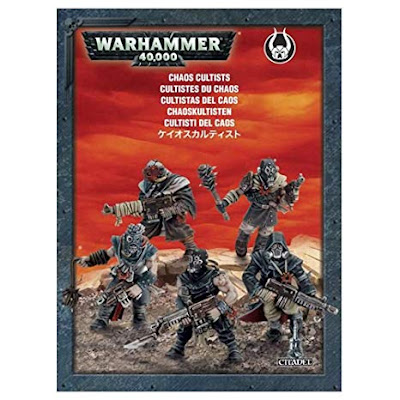 ...until I had a total of 7 boxes/35 figures.  The box's content description lists the typical weaponry carried by the cultists.

A few months ago, I assembled the figures, then I sent the whole kit & kaboodle to Dan, my go-to guy for painting WH40K figures and vehicles.  When I got them back last month, I painted and flocked the bases.

I divided my Chaos Cannon Fodder into three groups differentiated by their bases.  One group of 10, are mounted on green, grassy bases.  The second group of 10 are on ash-grey bases, while the last group of 15 are on tan/brown sandy bases, with the darker brown-based figures forming a "command" group of sorts.

The next 11 pictures are a sample of one finished, 5-figure box, which I'll assume is a fire team or half squad.

A fire team of Chaos Cultists on patrol in the wilderness: 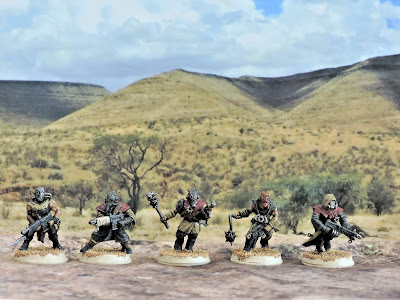 The first figure, I assume could be a team leader, or at least a close-combat specialist brandishing an auto pistol and morning star: 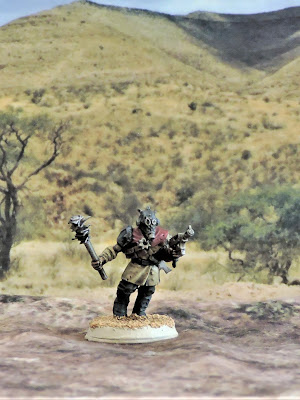 A side-view of Figure 1: 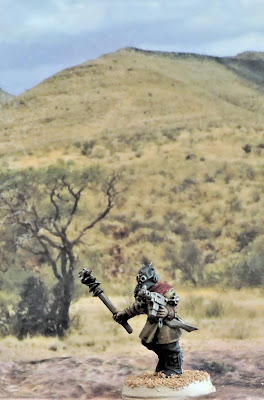 The second leader/close-combat figure is similarly armed with an auto pistol and flail: 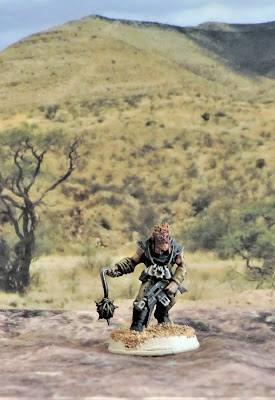 A side view of the flail-bearer: 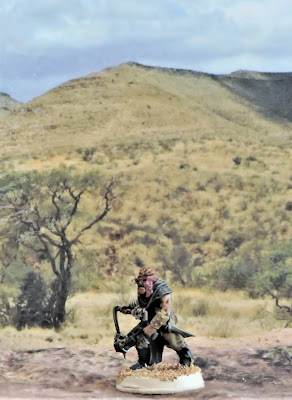 The third figure is cloaked and lugging an autogun of some sort: 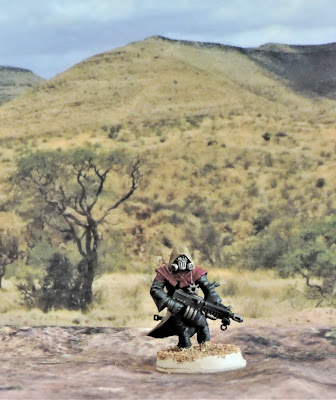 A side view of the cloaked figure: 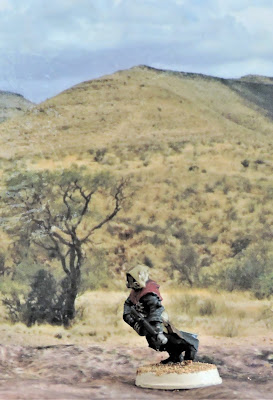 Because this figure leans so far forward, it was the most "tippy" of all the Chaos Cultists.  To resolve the tipping issue and to add more weight to the light plastic figures, I super-glued washers to the bottom of each base, then painted over each one.


The fourth figure is also a rifleman carrying what's generically described as an autogun: 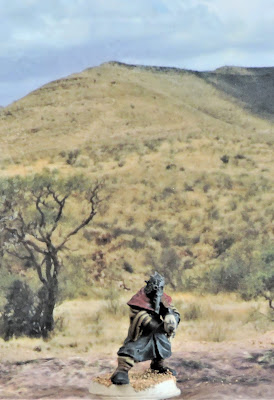 The rifleman's side profile: 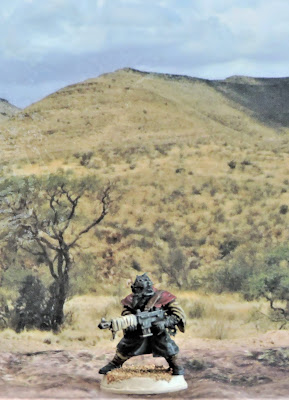 The last figure is another riflemen with a bayonet fixed to his autogun: 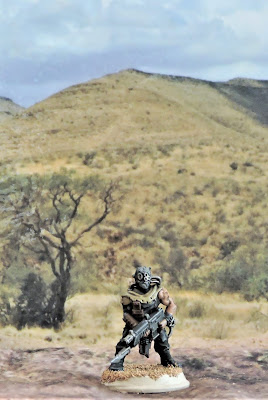 The bayonet-armed rifleman's side profile: 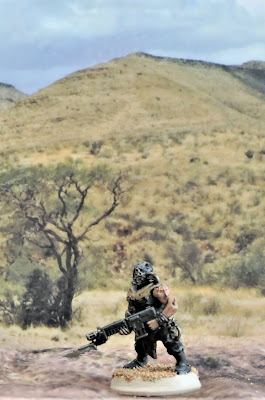 The remaining 30 figures were painted-up by Dan in a similar fashion.  No two look exactly alike. 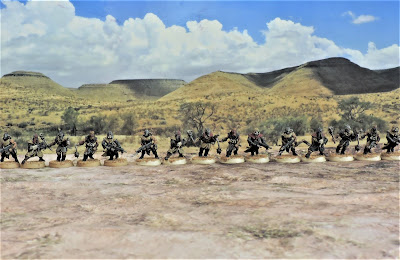 My fully-mustered Chaos Cultist force looks something like this on the battlefield: 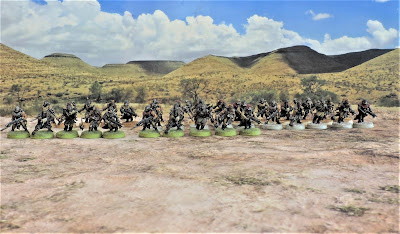 One of the main reasons I chose to collect the Astra Militarum is because the figures have a generic enough look I can utilize them in other sci-fi game settings.  Like US Colonial Marines in the Alien vs. Predator 'verse.

I can also use these Chaos Cultists as mutant soldiers in various post-apocalyptic/sci-fi horror settings.

Getting back to the grim darkness of WH40K, I couldn't find any printed game statistics for a mob of Chaos Cultists.

However, I found a few on-line sources.

For anyone still playing previous editions of WH40K, there's-- 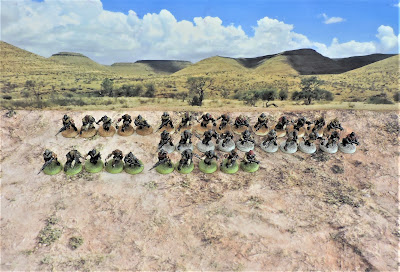 I certainly don't have enough cultists for a full WH40K Chaos force.

But I figure it will be enough as a mob of minions to throw at a Kill Team, or player characters in a session of Wrath & Glory.
Posted by Ted Henkle at 4:00 AM No comments: