Pass in Review: US Navy PT Boats for Cruel Seas


My apologies for the long delay between posts.
I'm currently dealing with a major health issue, that I'll comment at length about below.
Despite attending multiple medical appointments and suffering from fatigue (among other things), I managed to finish painting my US Navy PT Boat collection for Cruel Seas collection.
Some of my vessels came from Warlord Games' US Navy Fleet Starter Set...

...while the bulk of my boats came from the US Navy PT Boat Flotilla set: 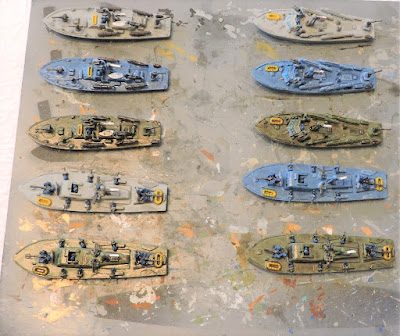 I painted four vessels from the US Navy Start Set and "Lend Leased" two of them to the UK Royal Navy.  (Translation:  I put Royal Navy ensigns on two boats).

I painted each vessel type in distinct color schemes for easy identification during gaming.  The Army Painter colors I primarily used for the decks & hulls were:  Ash Grey, Field Grey, Army Green, Deep Blue. The boats' equipment were painted in Filthy Cape, Wolf Grey, Rough Iron, or colors similar to each deck color.  Since I found Gun Metal too shiny, I mixed it with an equal amount of Matt Black to paint the boats' armaments. The rafts and life boats were painted Phoenix Flame and Matt White, respectively, simply because I wanted to add more color to the boats than varieties of blue & grey.

The two blue vessels are actually two-toned, with grey hulls and blue decks.  I stole the idea was inspired by "FlyXwire's" photo on The Miniatures Page:

There are 3 distinct types of vessels in my collection.
First are the Elco Boats: 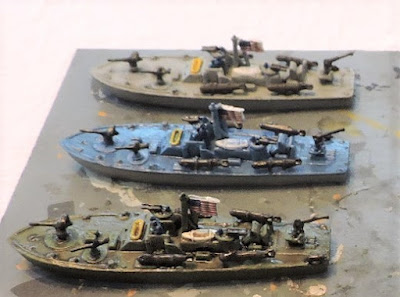 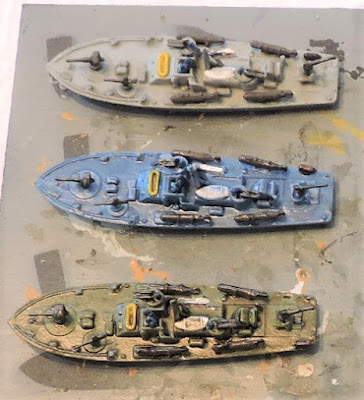 The most famous being PT-109, skippered by JFK.

Next are the Higgins Boats: 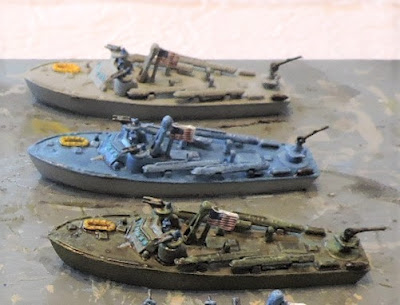 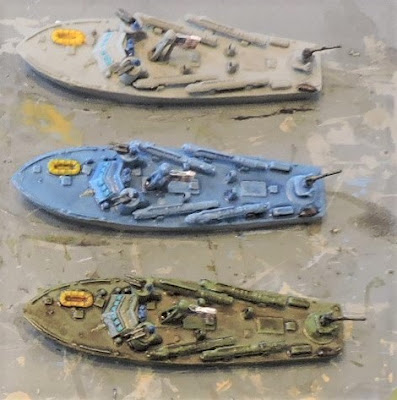 Since I bought two packages, each containing two boats, I inadvertently created one more boat of this type than was done historically.

Well, wargamers usually like to play fast & loose with history in order to explore "what ifs?" So I don't think my extra boat would overbalance any tabletop campaign.

Speaking of campaigns, one of the reasons why I'm excited about completing my PT boats is because I also purchased, Devil Boats, by Compass Games.

It's one of the many solitaire games that are becoming all the rage among today's tabletop gamers.  I like the idea of using this game to generate Cruel Seas scenarios in a mini campaign.

And I didn't stop here either.  I pre-ordered the company's upcoming Schnell Boats... 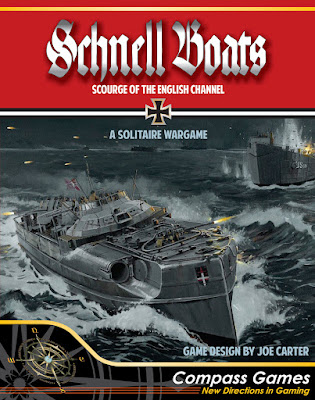 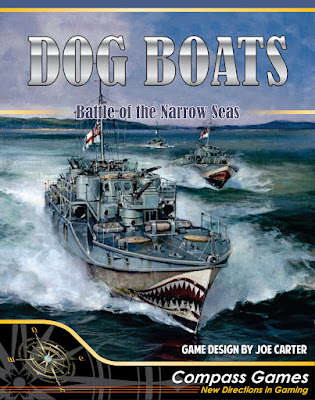 I'm looking at playing solitaire games as soon as I finish painting and assembling my remaining vessels belonging to the UK Royal Navy and Italian Regia Marina.

The reason being, as I mentioned in the beginning, is I'm now in poor health.

I've been battling what turned out to be Idiopathic Pulmonary Fibrosis (IPF).  It's a degenerative, incurable lung disease that know one knows how I developed it (the "idiopathic" part of the definition).

I'm chronically short of breath, prone to coughing fits and have difficulty speaking.  My symptoms have worsened, especially these past couple months.  In fact, I'm currently going through the process of qualifying for a lung transplant.  I'm on oxygen and need a walker or wheelchair to go any distance beyond that of a typical room in my house.

Because of my condition I was medically discharged from my job as a State Emergency Operations Officer for Washington State Emergency Management (EMD) and am now considered disabled.  I'm currently applying for disability benefits through the Veterans Administration and Social Security.

My wife and I spoke with two pulmonary doctors at the Transplant Clinic.  They told us that patients diagnosed with IPF have an average life expectancy of 3 years from the time of being diagnosed.

I was diagnosed in April 2020, so I'm just past the half-way point.

What's worse, is the doctor said that my symptoms indicate that I have "...a whole lot less time than this."

Waiting for a lung transplant can be a very quick or very long process.  Current average wait time is 7 months.

Hopefully, I can hold out, get the transplant and finish painting my Cruel Seas boats, along with starting up solitaire games to add to this blog.

Thank you for your support.