In my last Warhammer 40K post a couple weeks ago, I presented my Tactical Air Control Party (TACP).

But as far as actual air assets, I have only one full-sized Vulture gunship and a Valkyrie assault carrier.

I'm now at the point where if I buy anything new, I have to get rid of something old, or at least unused.

When Games Workshop came out with its Aeronautica Imperialis Wings of Vengenace, I bought it--and I sold a set of 28mm British and French Napoleonic figures to make room for my new acquisitions.

When Aeronautica Imperialis Skies Of Fire was released, I bought that too.

I was only interested in the Imperial aircraft and the store owner wanted the T'au omes.  So he gave me some cash to compensate for the figures.

What I had left were a flight (2 aircraft) of Valkyries and 3 x Lightning fighters.

Because, I like campaign games.
I also buy games with the idea of utilizing them for other purposes.

This is justified, because in my professional experience "fast movers" don't chug around above the battlefield just above treetop level. They zip over the target area, unleash their ordnance and are gone.  If the surface-to-air threat is great enough, enemy troops on the ground may not even see the aircraft--only ordnance exploding all around them.

Now I have a number of "strike packages" for my TACP to call-in, but would like to see Games Workshop  make Vulture gunships for this game sometime soon.

But as I, along with other fans, impatiently wait, I had my current bunch of aircraft that needed to be assembled and painted.
Since both tasks are above my skill-set I turned to my friend Dan and hired him to paint my figures.
He finished with them a few months ago (and I gave him more stuff for him to paint), so what follows is a gallery of his work, set up as flights of aircraft approaching then rolling-in on their target.
1. A flight of Imperial Thunderbolt Fighters: 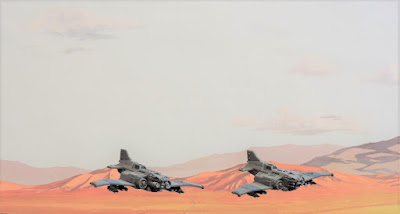 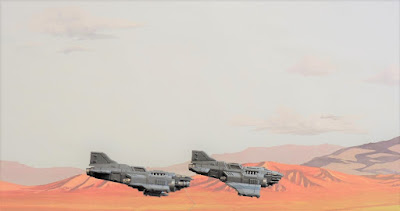 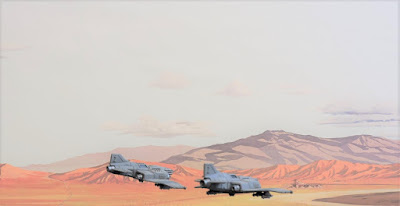 2. A flight of Imperial Lightning Fighters: 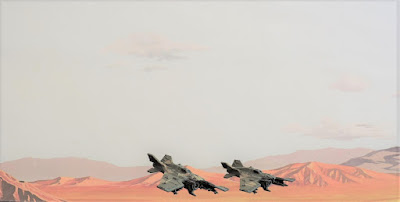 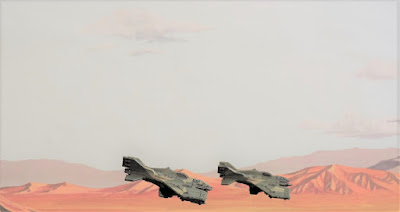 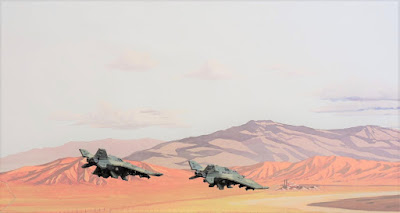 3. A flight of Imperial Marauder Bombers: 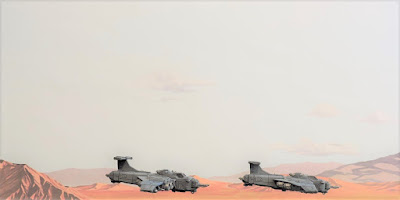 4. A flight of Imperial Marauder Destroyers: 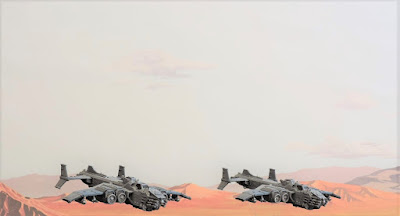 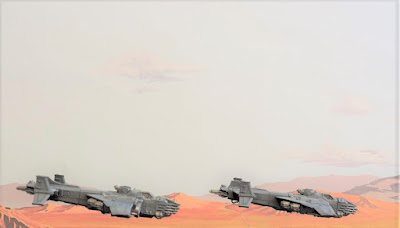 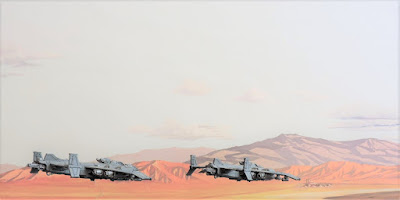 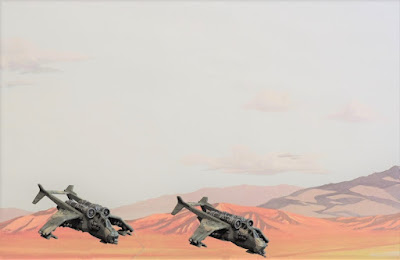 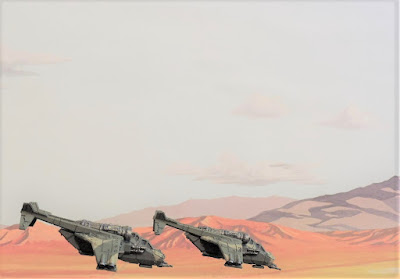 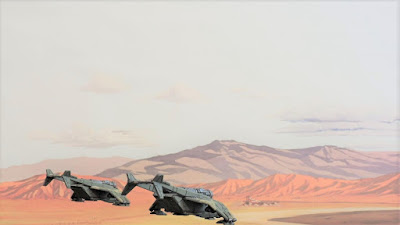 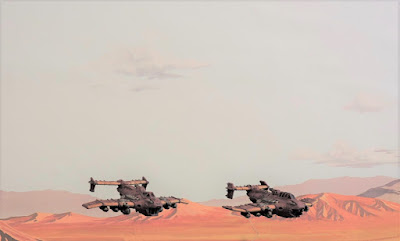 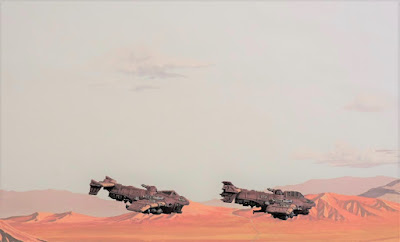 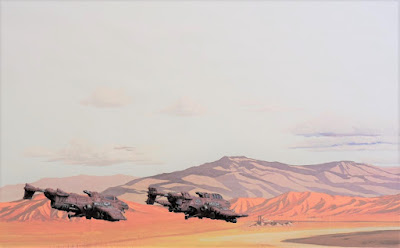 7. A flight of Ork Dakkajets: 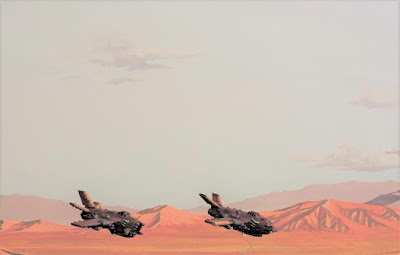 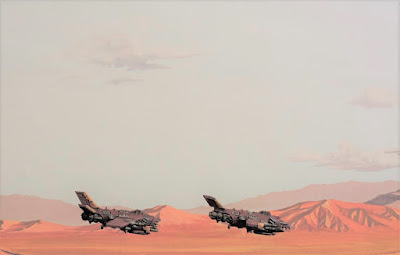 Artistic Note:
The backdrop is an open country setting I bought from a now-closed model railroad shop.  The aircraft are low in each picture because I couldn't orientate the figures on their stands with the backdrop in a way to present a "realistic image."
I at least I managed to photoshop-out the stands.
Posted by Ted Henkle at 4:00 AM No comments: 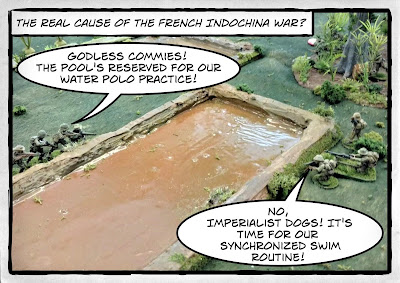 Most of my posts contain photos of game sessions that I took myself.

However, with all the on-line "rabbit holes" I venture into, I often come across photos from other gamers that trigger my imagination to write a webcomic or a "5 Second Flick."

I'm leading off today's post with a webcomic I concocted from one of the last pictures from my friend Tim's Indochina game session from a couple years ago. I finally got around to hijacking utilizing it, when I thought of an amusing plot hook for the encounter.

(Note:  Even though I don't profit from utilizing other people's pics, I first try to ask their permission to use them.  If I can't contact them, I'll at least cite the source).

A couple weeks ago I stumbled across a couple gems from some of the Facebook gaming groups I belong to.

The first is from Dean B.'s Normandy 1944 scenario of a Bolt Action game session: 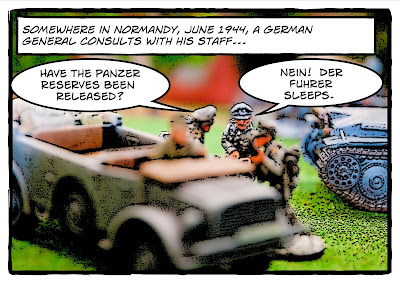 I thought this was a great image to paraphrase General Blumentritt's exasperation in the film, The Longest Day.
The second photo is from a guy calling himself "Otty."
He's been posting pictures in the Wargaming in Middle Earth Facebook Group, about the figures he's converting from other fantasy wargames into Middle Earth-suitable troops.
This particular picture reminded me of Lurtz's command to his Uruk-hai in the finale of the film, The Lord of the Rings: The Fellowship of the Ring: 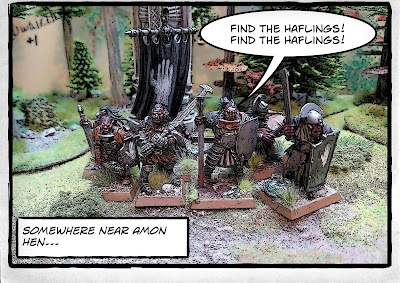 I'm currently in the middle of working on a couple of my own Warhammer 40K picture projects, along with painting my Cruel Seas collection.

In the meantime, I thought these hijacked borrowed pics-turned-webcomics would be a nice interlude until I get my act together until I can write the next in-depth blogpost.