For the past handful of days I've been binge-watching Marvel Movies.

Normally, I'd post individual movie reviews.  However, after watching half-a-dozen movies straight and being way behind on my webcomic and wargame projects, I'm feeling both overwhelmed and lazy.

So for this post I'll just write a few lines about each movie, consisting of each movie's plot synopsis, along with what I liked and where I thought the films fell short.

For now, I'll start things off with:

In this fun flick, a ragtag bunch of misfits try to keep an artifact of doom, in the form of Infinity Stone from falling into the hands of Ronan the Accuser, who decides to defy his boss Thanos.

I loved the Awesome Mix Vol 1 soundtrack, which I've heard some say make the movie.  On the flip-side, I thought the badguys/badgirls were too melodramatic, as if they were participating in a World Wrestling Entertainment (WWE) match, instead of implementing galactic conquest.

While the Guardians of the Galaxy are groovin' to 70s music, the mutants face extinction sometime in a Bad Future.  As the Sentinels close-in, Wolverine's consciousness is sent time travelling back to 1973, to prevent shape-shifting Mystique from assassinating the Sentinel creator.

Because Mystique gets captured and her DNA was used to create the Sentinels.

When all is said and done, Wolverine wakes up to find himself back at Professor Xavier's School for Gifted Youngsters as he did during the first X-Men movie, but is now the only one who remembers what happened.  Even the characters who were killed-off in the previous movies are "brought back to life."

Time travel appears to be movie studios method of choice to reboot a franchise.

Wolverine isn't the only fish out of temporal water.  While still getting use to life in the 21st Century, Captain America finds himself ensnared in a conspiracy.  He and Black Widow discover their employer S.H.I.E.L.D. has been thoroughly penetrated and compromised by HYDRA.

In order to destroy HYDRA, our heroes and their allies are forced to bring down S.H.I.E.L.D. as well.

This movie's central theme centered on the dilemma of freedom vs. security, or who watches the watchmen?

While S.H.I.E.L.D. and HYRDA lay in ruins--for now--Thor's love-interest, Jane Foster, finds herself teleported to the dark world of Svartalfheim, accidently opens the Sealed Evil in a Can and is possessed by "The Ether."

To stop Malekith the Accursed (presumed dead) and his dark elf mooks (presumed extinct); Thor, Jane and their pals on Earth and Asgard, spring Loki from prison and attempt to thwart the impending World Wrecking Wave from braking over the Nine Realms.

I don't have any patience for recurring villains, but Loki is the most entertaining-but-exasperating of the Marvel Studios cast-pool.

I enjoyed all four movies and they did well enough at the box office that sequels are in the making.

Now all I have to do is get around to seeing the movie Avengers: Age of Ultron, along with the TV Shows Agents of S.H.I.E.L.D and Agent Carter.
Posted by Ted Henkle at 7:30 AM No comments:

Even though I was scheduled to work this past Memorial Day Weekend, I still registered for this year's NHMGS Enfilade!

This years game theme was: 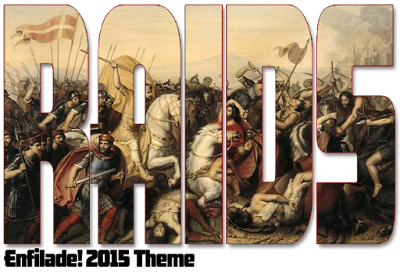 The problem was, I was scheduled for night shift and there was more than the usual two-man crew scheduled to work day shift.  So it was impossible for me to switch with someone, as I did a few years ago.

But my cunning plan was to catch the final moments of Enfilade to check out the games, the vendors wares and pick over the remains of our group's famous Bring & Buy (B&B).

My morning nap was longer than I anticipated, plus I needed to refuel my Jeep and grab something to eat.  During this side trek, I realized I forgot my wad-o-cash, so had to divert back home.

By the time I arrived at the Red Lion Inn (Olympia), I literally caught the final hour of Enfilade.

And I do mean literally literally.

The Registration Desk and the B&B had shut down operations.  In order to get my t-shirt I had to chase down Al, who ran Registration.  He was willing to re-reimburse me $20, but I counter offered that I'd take an Enfilade! hat instead.

While I was disappointed on missing the B&B, I managed buy some micro-scale terrain from the Monday Knights.  I also bought a bunch of latex roads to replace the ones that mysteriously turned to goop as if it came through a malfunctioning Transporter Beam.  The manager (I'm afraid I didn't get his name), was very understanding.  He assured me they're now using a different goop-resistant latex, tossed-in a couple free roads, and shaved my Road Reconstruction bill down to an even $40.

I stumbled across a Reaper Miniatures Learn to Paint Kit from another vendor in the process of packing-up.  Since I bought a handful of Reaper's Bones Miniatures, I figured I needed all the help I could get at painting them to a decent level, so I purchased the kit before it was packed away.

My Final Hour Fly-By wasn't just a shopping spree.  I met my fellow NHMGS pals Gene Anderson and Scott Murphy, and spent some time chatting with them about this year's convention.

Even if I managed to arrive earlier than I did, I knew I wasn't going to be able to participate in any gaming.  However, I figured I could make a nuisance of myself and snap some pictures of Enfilade 2016's Final Hour.

Here's a glance at my walkabout:

I hope everyone enjoyed Enfilade 2015!

Dave Mebust uploaded an Enfilade 2016 on Facebook a couple days ago, so you can let folks know if you're planning on attending and can even send out invites to your friends.

Hopefully, I'll be able to attend for more than an hour next year.

However, until my work schedule is finalized, I'm in the "Maybe" Category.
Posted by Ted Henkle at 6:00 AM 3 comments: 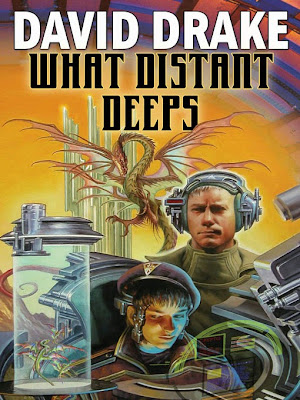 What Distant Deeps, Number Eight in the Royal Cinnabar Navy (RCN) Series, could be titled "The Problem With Proxies."

Ordered to escort a new ambassador to the planet of Palmyra, Daniel Leary and Adele Mundy discover the Palmyrans are secretly pursuing their own agenda.  With the help of some corrupt Cinnabar citizens, Psycho Queen Irene, plans to conquer neighboring Zenobia.  The problem is, Zenobia is allied with Cinnabar's former enemy, the Alliance of Free Stars (a Peoples Republic of Tyranny).

Should Zenobia fall to the Palmyrans, Gaurantor Porra, the BigBad of the Alliance of Free Stars, will consider this an act of war and will resume hostilities with Cinnabar.

To thwart the Palmyran plan, Leary and Mundy team-up with an Alliance naval officer commanding two destroyers and set out to save the day.

What I enjoyed most about the book is the character interactions of True Companions Daniel and Adele, along with their Ragtag Bunch of Misfits crew.

Although, after reading the other reviews on Amazon, there's a growing sense of fatigue among the readers, even the 4-star raters.  The most common comments are the RCN stories have become formulaic:  Adele manages to hack into the bad guys computer systems, then Daniel out-sails or outmaneuvers them in a space battle...lather, rinse and repeat.

While this pattern is certainly evident, I still find the series entertaining and intend to buy and read more of  David Drake's "Aubrey-Martin IN SPACE!"

The series has been around long enough to earn an extensive list of tropes.

Imagine you've been devastated by a personal catastrophic event.

Years later, you're still trying to pick up the shattered remains of your life.

Now suppose, a man in a black suit approaches you with a briefcase, and an offer.  The case contains a semi-automatic handgun, 100 rounds of ammunition, and a dossier of the person, or persons, he wants you to kill.

Even though he assures you that the weapon and ammunition are untraceable, and that you'd be immune to prosecution, you still feel squeamish about doing someone else's dirty work.

But then the man-in-black then tells you that this "person-of-interest" is the individual responsible for ruining your life.

Would you take the offer?

This is the tantalizing premise of 100 Bullets: First Shot, Last Call.


A "Warning Shot" to Readers:

100 Bullets First Shot, Last Call is not a "family-friendly" series.  While there's no explicit sex scenes, the novel doesn't pull any punches depicting the harsh realities of street-life:  Prostitution, substance abuse, and of course all levels of violence are depicted in such sleazy settings as crack-houses, strip joints, rundown bars and abandoned buildings.

In the introductory story, Isabelle ("Dizzy") Cordova is approached by a man who calls himself Mr. Graves... 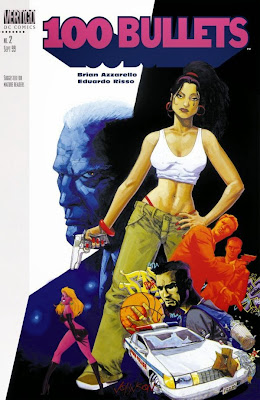 ...and offers her a chance to kill the two crooked cops who killed her ex-gangbanger husband and infant son in a drive-by shooting.  A crime for which she was implicated in, and sent to prison for.

In the second tale, Mr. Graves makes a similar offer to Lee Dolan. 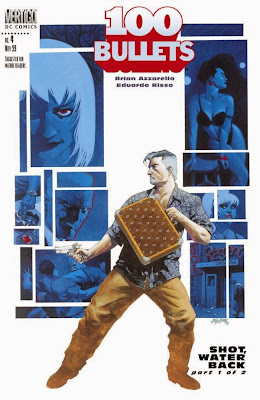 This time, the target is the woman who framed Lee, a former restaurateur, for peddling child pornography.

As you can probably guess, giving a weapon and plenty of ammo to someone with a serious grudge, will lure them down the path of vengeance.

And herein lies some catches:

The path of vengeance is not a straight course, as complications, doubts and even temptations arise.
But more importantly, seeking revenge comes at a price.

Even when vengeance is obtained--not everyone can pay the cost.

Just about everyone agreed that 100 Bullets is a great concept, but the 3 & 4-star raters felt the story missed the target in one, or several ways, such as:  stereotyped characters, contrived "street lingo," dialogue, while the revenge-based plot device was became rapidly repetitive.  The 2 & 1-star raters weren't impressed at all and thought the series was overrated.
I thought the book was 5-star awesome.  Both the artwork and narrative were on-target for a modern-noir story.
A stellar review was posted five years ago on Unobtanium 13, while my comic book aficionado co-worker, Ed, had this to say:

Not Out of Ammo Yet:

100 Bullets First Shot, Last Call, is a compilation of the initial five 100 Bullets comic books, which ran for--yup--100 issues.
The series scooped-up an ensemble cast of characters, along with numerous awards.  Afterwards, the comics were all compiled into 13 graphic novels, which just happens to be a significant number for the shadowy cartel known as "The Trust."

A series this long though, is fully-loaded with tropes, and even has it's own 39-page wiki.

I decided to go vintage/humorous with my holiday greeting this year.

Here's one of my favorites: