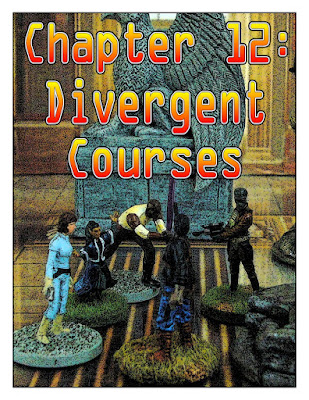 The pace at where I work didn't slow down any since my last chapter posting.

Not only that, but Chapter 12 was originally much longer than it currently is.  As the page length lengthened, I ended up dividing the narrative into more chapters as I found more appropriate stopping points.  So this part of the story grew from Chapter 12 and 13, to Chapter 12--14, and finally to Chapter 12-15.

By the time I reached this point, I decided to quit writing additional material and work on editing and revising.

By the time I was satisfied with most of my recent work, I did some final tweaking of Chapter 12.

My "cunning plan" is to do the similar tweaks to Chapters 13 and 14 within the next couple weeks and then post them.

Which brings me to Chapter 15.  I'm not currently happy with it.  I feel this portion will require some major re-writing, but I'll wait until Chapter 14 is posted before I even start.

In my last webcomic update, I said I'd launch a new format for Breakout from Bongolaan by 4 January 2016.

Well, I'm afraid I have to postpone the launch date.  With the little time I've had to spare, I devoted it all to getting these chapters written.  I'm hoping the delay won't be more than a month.  I appreciate your patience.

For this chapter's theme song, I chose Home by Edward Sharpe and the Magnetic Zeros.

You might think this is an odd choice for a chapter's mood music, especially since Star Wars is and epic  space opera, not a space western, like Firefly.

But I think the song fits for a few reasons.  First, in this chapter Callithea expresses her desire to return to her home planet.  This segways into a hint of what society on Callithea's home world, Tarsus, is like.  Finally, our heroes are essentially planning for a "road trip--IN SPACE," and depending on what list you read, Home ranks anywhere from #13 in Paste Magazine to #1 on BuzzFeed.


Best wishes to all of you this Christmas Day.
Posted by Ted Henkle at 12:30 AM 2 comments:


The Force Awakens broke another record a couple days ago:  The Monday after opening weekend box office sales.

It's the most talked about movie on-line, on-air and in personal conversations.

I haven't seen the movie yet, although my wife got reserve tickets at a luxury theater in Seattle--for mid January.

Fortunately, everyone has avoided divulging the plot. 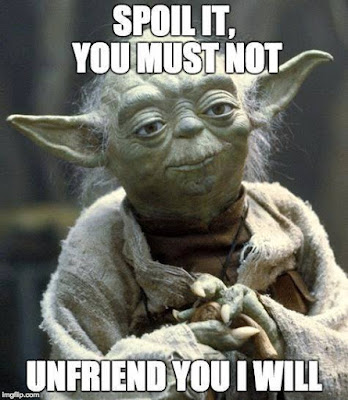 ...warning of the consequences for lacing their conversations with plot spoiler.

When I shared the Yoda meme on Facebook, one of my friends replied with this: 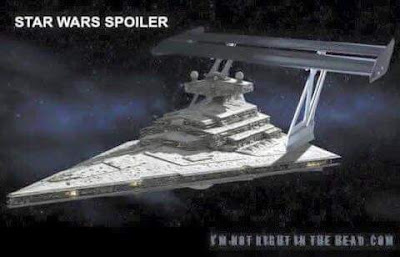 I hope those of us who've yet to see the movie can maintain their "spoiler shields." 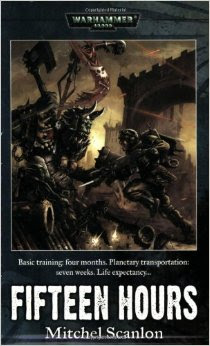 For my second foray into Warhammer 40,000 (WH40K) literature, I chose Mitchel Scanlon's Fifteen Hours.  This story follows 17 year old Arvin Larn, from his involuntary induction into the Imperial Guard to his frontline experiences during the Siege of Broucheroc, an industrial city surrounded by Orks.

The first three chapters introduce us to the main character, his family, and his in-transit training with the 14th Jumael Volunteers.

By the end of Chapter Four, Larn finds himself the sole survivor of the 6th Company, after they were directed--by mistake--to make planetfall near Broucheroc, and ended up crash landing in no-man's land (Chapter Five).

In Chapters Six through Seventeen, our hapless hero learns the significance of fifteen hours:  It is the life expectancy of a new recruit to Broucheroc.  During these 12 hours, Larn faces Ork snipers, friendly fire, some unfriendly team mates, incompetent officers, bad food, an all-out Ork assault, and a night patrol into no man's land.

Technically, Larn survives past 15 hours to see the dawning of a new day--but his fate is not a happy one.

Basically, Fifteen Hours is WH40K's version of All Quiet on the Western Front--and just as depressing.

The author paints a grim picture on what life for an Imperial Guardsman on the frontlines is like.  But this is in-keeping with all the WH40K background material found in the core rulebooks and supplements, known as "codexes."


I give Fifteen Hours a 3-star rating, primarily because of the downer ending.

My rating is only 0.7 less than the average rating on Amazon.com, with only 61% of raters loving the story (4 & 5-stars).  Many of the unsatisfied raters (1 & 2-stars) were critical of the author's writing, whereas I thought the author did a good job with this being his first novel.

I just wanted to see the hero prevail over "...the grim dark future."

As an aside, the cover art of my copy of Fifteen Hours is pictured above.  The problem with it is, Larn doesn't go "mano-a-orko" against an ork warboss.

So the heroic image is misleading.

There's an alternate cover, but so far I can't determine if it's from an earlier or later edition.  While it's more appropriate to the story, there's a 39% chance, based on the 1-3 star raters on Amazon, that it won't improve one's reading experience. 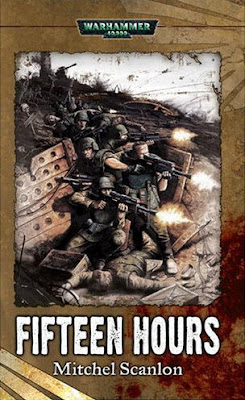 The Force Has Awoken!


By now, thousands of fans have probably seen midnight showings of Star Wars:  The Force Awakens.

From initial accounts at the premiers in Hollywood and London, audience response has been enthusiastic.

It will be about a month before I see it due to my wife's and my own work schedule.  But at least we have reserved seats in a deluxe theater!

In the meantime, I submitted my picture of my Tantive IV fighting a couple of TIE fighters to the Seattle Times.  It was included in the gallery of an article asking Star Wars superfan? Share pictures of your favorite collectibles.


For those who'll see the movie before I do:  I hope the movie and the big-screen experience was everything you hoped it to be. 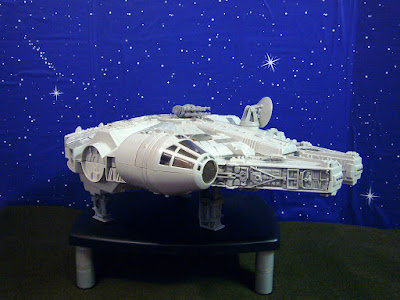 Part of the appeal of science fiction in general, and Star Wars in particular, is the ability to roam the galaxy at ludicrous speed.

So for a Star Wars role playing game (RPG), acquiring a starship, but not necessarily "buying" one, is a critical goal for player characters (PCs) starting out on their misadventures.

If you're involved in a game which relies heavily on miniatures, representing a starship can be difficult.  While two-dimensional deck plans or graph paper, while effective, loses "cinematic appeal."  Models specifically made in typical "RPG Scale" (usually 15-35mm Scale) are invariably scratch-built by talented modelers, like Maker.e2oGame.

For those of us lacking talent and patience to construct our own ships, we turn to toys.

For my, now dormant, Redshift Chronicles Campaign, my friend Joe placed his Millennium Falcon Playset in my care, which was utilized on a couple of adventures.


The playset isn't exactly to scale as my Star Wars Miniatures, but I figure starships are suppose to be big anyway.  Besides, there's enough room inside to get interior pictures.

I've had Joe's 'Falcon for a few years now.  During this time, I've made half-hearted inquires about buying my own, but have balked at the "Collector's Edition Prices."

However, two events motivated me to acquire my own 'Falcon.

First, we're just 10 days away from the premier of Star Wars: The Force Awakens.

Which means Star Wars merchandise has deluged the market long before the movie appears on the silver screen.

And second, Joe is now the father of two little boys.

I reached my decision point a couple weeks ago, when I stumbled across Hasbro's "Force Awakens" Millennium Falcon, while Christmas shopping with my wife.  (Isn't it amazing how you manage to find gifts for yourself when shopping for others?).  I was hesitant to buy it, but my wife assured me it was okay, thus salving my guilty conscience, and the Base Exchange (department stores on military installations) was knocking off $25 for purchases of $100 or more as part of their "Black Friday Weekend Sale." 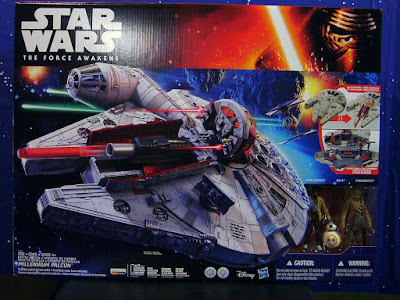 The price tag on this new 'Falcon alone qualified me for the discount.

I haven't opened it yet, since we've been busy putting up Christmas decorations.

Yes, at the risk of loosing some of the collector's value, I do intend on opening the box, because I want to have the ship "ready for flight" for any future Star Wars RPG/skirmish adventures.  But my "cunning plan" is to open it carefully and keep all the parts I won't utilize, in order to maintain a decent portion of any possible collector's value.

One possible point of concern is the new 'Falcon looks smaller than the older one, but I'm hoping it may be more appropriate for my Star Wars Miniatures I use.

In any case, I have a new 'Falcon, Joe gets his old one returned and he'll get to experience all the parental joys of watching his two boys fight over play with an iconic toy. 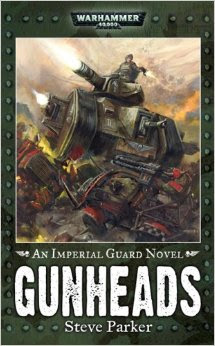 Despite my continued resistance, I'm finding myself slowly drawn into the futuristic hell of Warhammer 40K (WH40K).

Over the Thanksgiving Weekend, I finished my first WH40K novel--Gunheads, by Steve Parker.

I bought my copy at Half Price Books along with a handful of the initial stories in the Gaunt's Ghosts Series.

I chose to "test the WH40K waters" with a one-of novel instead of plunging into a series within a setting I have mixed feelings about.

Gunheads is one of over a dozen Imperial Guard novels.

These books are directed towards WH40K fans, and are written by WH40K fans.  Based on my neophyte experience with the game's rules, Steve Parker seems to have a good grasp of the details of this uber-dystopian future.

While there's a plethora of WH40K novels, I remain only interested in the "ordinary people in extraordinary circumstances" stories. Tales of the Imperial Guard are like the Red Army--IN SPACE.  I felt great sympathetic towards the men and women doing the fighting and dying--mostly the latter--but held many of the leaders in contempt.

Gunheads is about the mission of the 18th Army Group Exolon, who find themselves on an Ork-infested planet attempting to retrieve the super-heavy tank, Fortress of Arrogance.


Initially, I thought sending thousands of men and hundreds of tanks on a quest to recover an old tank was a lame plot device.  While this is in-keeping with the superstition and reverence Imperial citizens have towards technology,  I was relieved after reading further that many of the officers and men felt they were on a suicidal fool's errand.

Overall, I liked Gunheads, which has an average 4.3-star rating on Amazon.com.  Only one reviewer, an active duty armor officer who thought the portrayal of the soldiers and tank battles fell short, gave the book a 1-star rating.

I'm only giving the novel a 3-star rating for a couple of reasons.

First, the author spread himself thin, by not focusing on Sergeant Wulf and his tank crew, as advertised on the back cover.  The story is about a massive planetary expedition on a combat retrieval mission.  Wulf wasn't even instrumental to the mission's success, but merely a participant.

Second, I'm still not a complete fan of the WH40K 'verse.  It's hard for me to muster enthusiasm about an interstellar empire that employs Inquisitors and Commissars to weed out heresy and maintain morale. So the only reason why I even care for some of the Imperial Guardsmen is because some of their fellow humans in other branches of the Imperium of Man, along with all the other alien species, range from just-as-bad to a-whole-lot-worse.

The more of a WH40K fan you are, the more you'll like Gunheads, and I'm sure all the other works found in The Black Library.