In this feature, the Punisher and Deadpool make it clear that they're not in Seattle to sight see.

Here's an alternate movie short, with a similar theme:


Welcome back for Episode 2 of Five Second Flick Theater!

The few pics the charity took of me and Deadpool (I never caught his name) has provided me with fodder for my Facebook profile pic, a short webcomic and now a series of Five Second Flicks.

The first theme I thought of for this episode plays on the assumption that it rains all the time in Seattle.

And now a word from out sponsor... 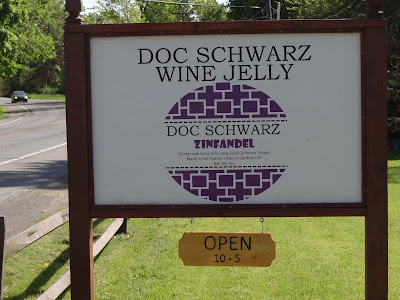 If you find yourself trekking through New York State's Hudson Valley area, and have a hankering for a unique tasting snack-spread, check out Doc Schwarz Wine Jelly.

My sister, Roberta, and her husband Eric started making this for over a year now.  They've now opened a gift shop and have just planted starter-vines for their own vineyard.

But don't just take my word on how great Doc Schwarz Wine Jelly is.

I am Roberta's brother, after all.

Here's a glowing article from The Gardiner Gazette.
Posted by Ted Henkle at 5:00 AM No comments:

Just in time for Mother's Day.

I discovered a special effects program while uploading some new pictures.  The effects create a 5-second long video.So I went through various pictures I took through the years and compiled them into what I call “Five Second Flick Theater.”  This “first episode” is based on my Facebook profile pic, which was taken at the Jet City Comic Show a few years ago.  The backdrop is from Comic Heroes for Causes and quote is my favorite line in the BBC show “Sherlock,” with Benedict Cumberbatch.

Okay, I don't have any sponsors per se.

But lately I've been encountering talented people running businesses, or informational websites that I think are neat and I thought it would be fun to add a "commercial" to some of my theatrical productions.


So my first shout-out goes to my dental hygienist, Kristina, who runs her own YouTube channel, Kristina RDH/Ask A Hygienist.

And in the interests of full disclosure, I did win her monthly raffle last month and received her gift box full of dental product goodies.

This was also the first time my name's been mentioned on YouTube and I'm still feeling thrilled about it.

Even if I didn't win, I tune in to Kristina's posts, because I always learn something new about oral health and I encourage everyone to check out her channel.

My Road to the Grim Darkness...

I've known about Warhammer 40,000 (WH40K) shortly after its initial release in 1987.  However, I've avoided getting into it--until several years ago when my daughter met her now-husband.

While he did some other gaming, he was primarily a WH40K player and collector.  So in order develop more common interests between us, I thought I'd just buy the core rules and a "few models" so I could at least talk to him about the "...grim darkness of the far future...."

Five years and 20 blogposts later, my "small" collection exploded into this--

--21 armored personnel carriers of various types and from 3 different factions, mostly Astra Militarum, with a few from the Adepta Sororitas (a.k.a. "Sisters of Battle" nuns with guns of the Ecclesiarchy) and even the Inquisition.

--230 troops, mostly foot soldiers of the Astra Miltarum, along with a few squads of Battle Sisters and a couple Inquisitor retinues, along with some alien warriors.

And I'm having another 35 figures painted as I'm writing this.

Initially, I bought kits of un-assembled vehicles and figures.  But then I stumbled across buy/sell/trade pages on Facebook and began buying assembled and painted miniatures for about the same price as the un-assembled kits.

I apologize for the sparse details, but I intend for this to be a "teaser" for future posts on my collection.  I'm currently suffering from a foot injury and I made it worse by attempting to do a prolonged photo shoot.

Besides the pictures didn't turn out well.

Of course, one can't simply buy miniatures without any guidance on what to do with them.

So over the course of about 5 years, I acquired 63 rule books and splatbooks of the main game, along with role playing game by Fantasy Flight Games and the new Wrath & Glory role-playing game which WAS produced by Ulisses-US, but now seems to have been dropped from the company's website, possibly due to a considerable number of negative reviews.

The main game, is now on it's 8th Edition, which I started buying two years ago.

That's because Games Workshop, like every other game company, would produce new supplements, accessories, etc. after the core rules are published.

The bulk of my book collection are earlier editions of the rules, or Forgeworld reference books.


When 8th Edition hit the shelves in 2017, I limited to my purchases to the main faction I was collecting--the Astra Militarum (a.k.a. the Imperial Guard).


Back when the short-lived 7th Edition was being played, I picked up almost all of 6th Edition rules and Codexes at used book stores for $5-$20.  I figure while the gaming Crunch has most likely changed since previous editions, the background Fluff should remain the same.

Of course, my feeble attempt at pinching pennies went out the window when Kill Team came out last year:


So there you have it.  My "small" investment into the wacky world of Warhammer 40K expanded to fill the empty spaces on my shelves and in my closets.

And speaking of shelf space, I can safely say I'm approaching my limit.  I'm at the point now where if I buy anything new--of any game--I have to get rid of something old.

I'd love to purchase a few more vehicles, specifically some Salamander scout vehicles, Destroyer tank destroyers, if I could find them in the first place since Forgeworld no longer produces them; along with a Lehman Russ Vanquisher.  But I have no room to put any of them.

The irony of all this is:  I have yet to play a single game of any edition of WH40K, Kill Team or either editions of the role playing games.

Nor is WH40K the only game system I've invested in, but have spent little to no time at the game table with.  I've whined about explained my game-time shortage in previous posts, so I won't bore readers (again) with the details.

Anyway, when a friend of mine shared this meme on Facebook...

..I felt it certainly applies to me regarding my entire collection of games.

I'm sure this is true for some (many?/all?) of you gamers out there.

Despite my lack of table-top time with WH40K I'm happy with my "small" collection, which is about the size of a reinforced mechanized infantry company.

I have a concept of how I'm going to organize it, what the unit will be called and webcomic stories I'll concoct about.

As soon as my foot heals and I can withstand standing for long photo shoots, I'll start posting what my contributions to the Imperial war efforts are.