Pass in Review: Some German Vessels in Cruel Seas, Part 2


Last month, I had what doctors called a "Life Threatening Event," which made my already shaky health worse for wear.
Hence the 3-month delay between posts.
While I've weathered this "critical hit," it's made me feel more worn down, plus my days off are often filled with follow-up medical appointments, leaving me with little time to paint my figures.
So I posted several notices on a couple gaming Facebook pages asking for help in reducing my "Mountain of Shame" (unpainted miniatures).  I received a few offers and already delivered a batch of French and Indian War (F&IW) figures to a local gamer for painting.
While I'm trying to contract-out my human-based figures to anyone who'll take them, I find my new-found Cruel Seas project to be within my skill-set and is somewhat therapeutic for me.
But when my helpful fellow gamers are done with all the human-based figures, I'll pass on any Cruel Seas figures I have left.
Until then, I'm still plugging away at my "Drydock of Shame."
I recently finished four Kriegsmarine vessels, starting with two raumbootes (see example in lead picture).

Here's an example of how the folks at Warlord Games painted them...

...and here is one of the two vessels I painted: 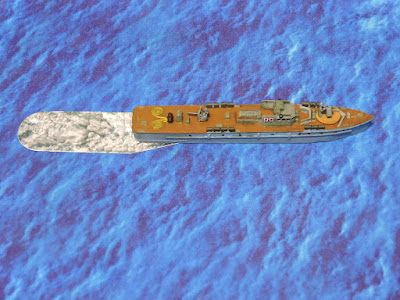 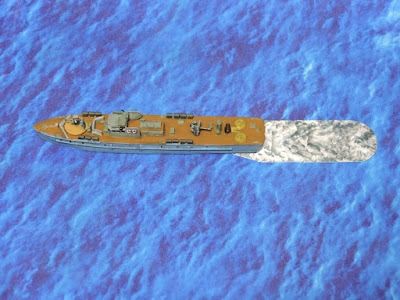 I made some minor alterations to the color-scheme in order to distinguish between the two vessels.

I thought these vessels were patrol boats.  It wasn't until I was trolling the internet thoroughly researching the topic, that I discovered they were originally intended as small minesweepers.

Speaking of minesweepers, the next vessel I finished was the M-Class Minesweeper. 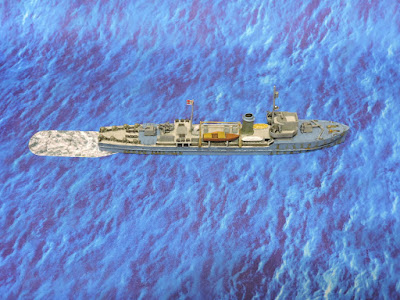 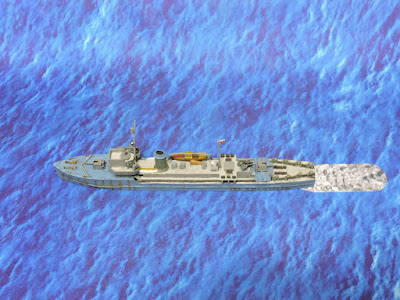 The last of this current lot is the Vorpostenboot, or "flakship."

My skills haven't advanced to the point where I can paint Dazzle Camouflage, like this... 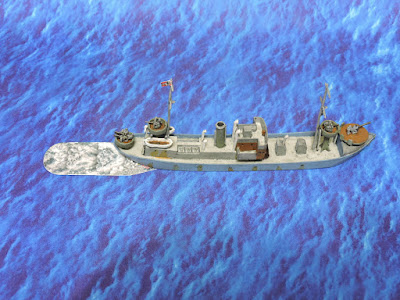 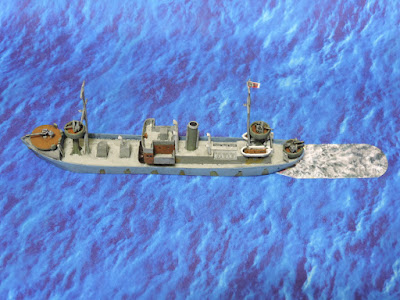 I settled on using Army Painter Wolf Grey for the vessels' hulls, with Ash Grey for the metal decks and Reaper Miniatures Harvest Brown for wooden decks.  Other shades of Army Painter grey were used for funnels, towers, smoke stacks, and superstructures.

Normally, I don't do any paint-mixing.  But for the ships' weaponry, I mix Army Painter Gun Metal with Matte Black, for a blackish-metallic look.

For a "realistic" look I photoshopped over the data and printed material on the wake/speed templates.

I still have several E-boats that I'm still working on, along with a variety of allied landing craft from GHQ.

Hopefully, I'll get my next post uploaded in under 3 months.