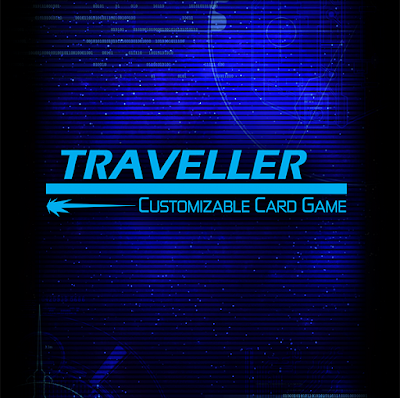 I started playing and game mastering (GMing)  Traveller within a few years of its initial release.  Although unlike 1d4 Chan’s claim, I’m actually older than the game itself.

Anyway, like some (many?) of you, I sadly don’t have time to play the full role-playing game (RPG).

A month or so ago, my friend Joe and I stopped in The Game Matrix to do some “shopping therapy.”  While browsing, I stumbled across the Beowulf Free Trader Ship Deck.  Despite being unable to read the content description on the back of the small box due to the price sticker, I bought the deck anyway.

Well, when I got home that day, I did some in-depth research internet trolling.

I discovered my new purchase was merely a supplement to the Traveller Customizable Card Game produced by Horizon.

I thought this game was brand new and was surprised to find Horizon’s products, such as the ship decks, expansion packs and accessories were out of stock.

Come to find out the initial Kickstarter campaign kicked-off just over three years ago.  (Not sure how I missed this one).

So I ventured to Game ON! since they seem to specialize in card games, along with family-friendly games. I ordered just about everything Horizon had to offer—which included another Beowulf Free Trader Ship Deck in the  Starter Set. 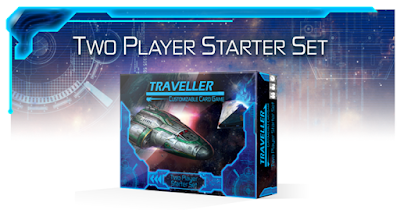 After my order arrived, I did a cursory read-through of the rules.

In the past, I’ve steered away from card games because I find them too abstract.  My feelings on this haven’t changed all that much—even after reading the rules.  However, because both playing space and gaming time are in short supply, and because this is a Traveller product, I’m willing to give this a try.

The quality of my new-found purchases are top notch, with lavish illustrations on the cards and in the rulebook.

Reading the rules is one thing—playing the game is something else.

I haven’t played the game yet and I’m still trying to understand the mechanics, so I’m not in a position right now to provide any information on how to play the game.

Fortunately, Michael & Brittany from Horizon are here to help with this Example of Play Video.

And speaking of actually playing the game, I find that not only are time & space are in short supply—but so are fellow gamers.  We all lead busy lives, and it’s often difficult to get together with one gaming buddy, not to mention assembling a whole crew.

Which is another reason for purchasing this card game—opportunities to play solo.  Here’s a Geek Gamers video of a solo play example.  (I’m glad to see I’m not the only one having difficulty wrapping my head around the rules).

Overall, the game is like Firefly: The Game, without miniatures and a game board.  This may be ironic since there’s been a debate on how much the show’s creator, Joss Whedon, was influenced by his time playing Traveller.

Anyway, despite any vague or hard-to-understand game mechanics, I look forward to “trying my hand” at finding a crew, finding a job and keep flying...