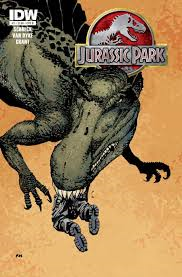 Tim and Lex Murphy, (the two kids in the movie), are grown up, and are running various remnants of their grandfather's corporation. Lex wants to keep the dinosaur island quarantined. However, Tim enters into a deal with a shady businessman and attempts to clear their grandfather's name--by re-opening a similar park, deep in the heart of Texas. 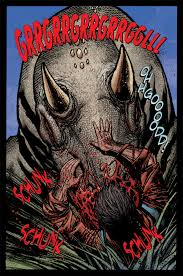 Fortunately, Doctors Saddler and Grant show up in the nick of time to help out.

Jurassic Park: Redemption is a valiant attempt an re-igniting interest in the series, long after the last movie was made. Keep in mind, the novel's storyline follows the movies and not Michael Crichton's books.

While I liked seeing all four of the main characters re-united, Jurassic Park: Redemption falls flat in a few key areas.

The artwork is okay at best. I agree with the other commentators, that it's often hard to tell the characters apart. One even said Doctors Saddler and Grant look younger than they did in the original movie. 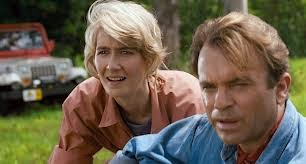 (Although both Laura Dern and Sam Neill looked great during last year's media blitz over the release of Jurassic Park 3-D).
The plot seems to be merely an excuse to see dinosaurs go on a rampage--again. Transitions sequences are choppy, or non-existent, making the story even harder to follow.

Since this is the proposed first volume of a series, readers are hoping the quality improves.

Overall, I think the book was okay, probably because I found my copy at a used book store. I'd probably feel less charitable if I paid full price.

Jurassic Park: Redemption has earned just over 2.5 stars on Amazon.com.  The two raters who give the book over 2-stars liked it because their young sons loved it.  Adult readers are less than impressed.
Posted by Ted Henkle at 6:00 AM No comments: 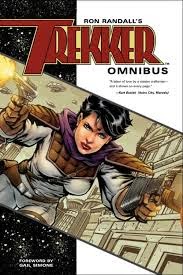 I never heard of Trekker until I stumbled across this Omnibus edition.

This tome contains all the stories, plus artwork of bounty hunter Mercy St. Clair, as she fights not only criminals on the lamb, but the corrupt police and politicians running New Galeph.

These tales aren't all about blasting bad guys. Mercy is a troubled woman, riddled with as much doubt as her body gets riddled with bullets, while seeking to find a balance between her rough profession and her softer personal life. There's a "creation of Mercy St. Clair" chapter that involves a mentor and an old flame.

The stories are well written and well drawn, although most of the images are in black and white.

Speaking of imagery: While athletic and attractive, Mercy isn't a overly-buxom babe in a skimpy costume. Oh sure, there's usually a picture or two in each chapter of Mercy in a nice dress, while out on the town, or even in lingerie; but her trekker (bounty hunter) uniform looks more practical than just about any other comic costume I've seen.

If you like retro-noir sci-fi with flawed female protagonists then Trekker Omnibus will be a good read for you. 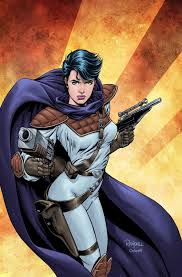 Posted by Ted Henkle at 7:30 PM No comments: 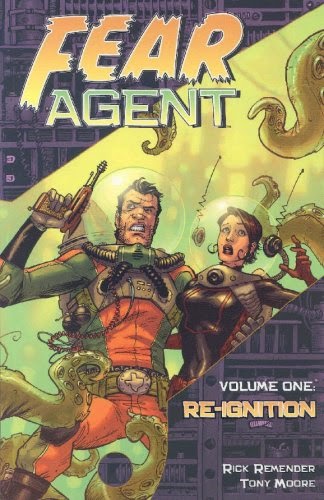 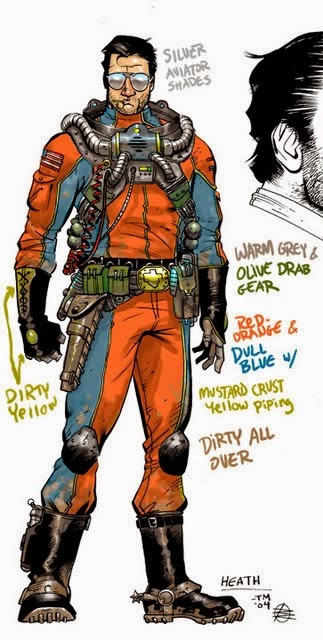 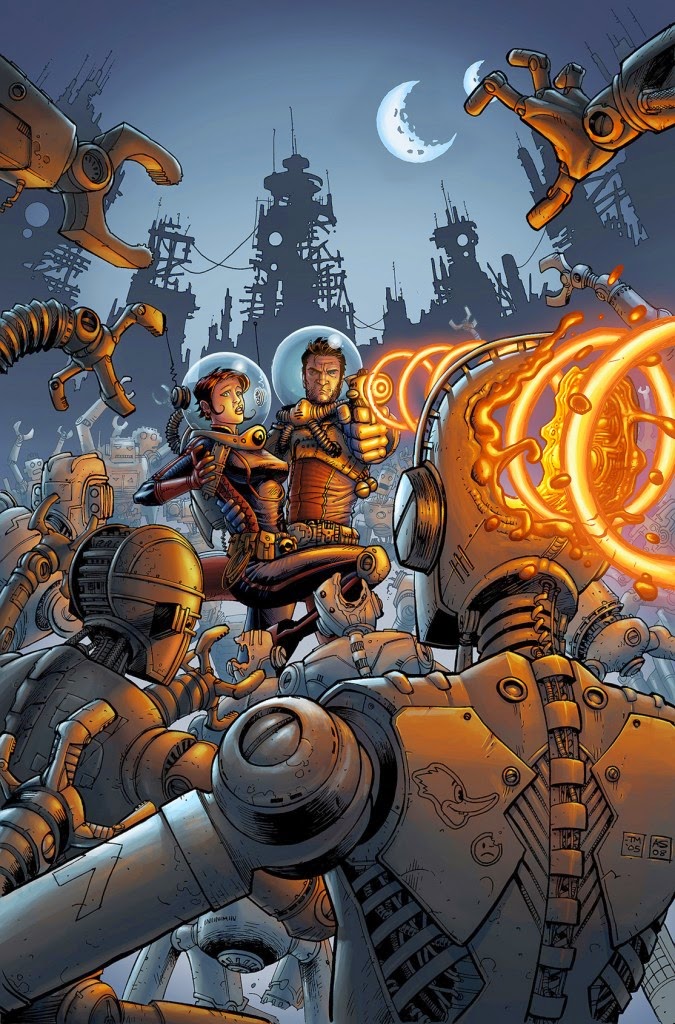 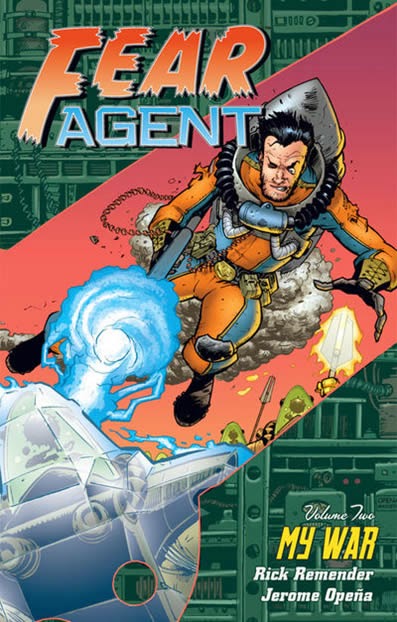 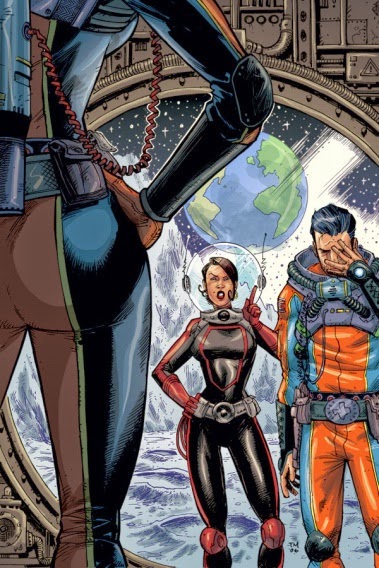 I'm hooked and look forward to getting caught-up on Fear Agent!
Posted by Ted Henkle at 7:30 AM No comments: 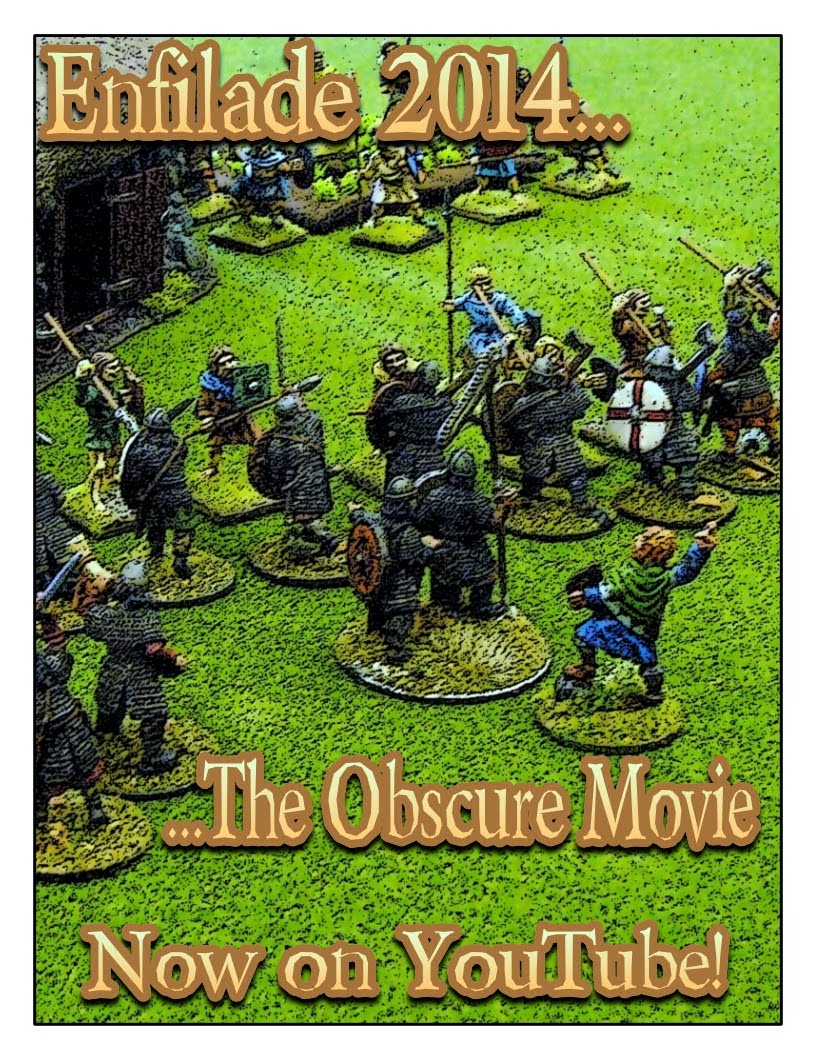 Well it's a little late in coming, but I finally uploaded the Studio's 32nd YouTube video, Enfilade 2014: The Obscure Movie, in honor of this year's gaming theme:  Obscure Theaters.

Normally, I try finish my NHMGS Enfilade shows within a few weeks after the convention is over.  But this year I wanted to get The Chronicles of Culhwch y Drewllyd published first, while the SAGA Tournament's events were still fresh on my mind.

Other "Life getting in the way" issues also delayed production, primarily dealing with a busy Fire Season at work. The season's not over, but the issues have dwindled down enough to give me the spare time to complete the movie.

In just about any fantasy role-playing game (RPG), a single adventurer, even a low-level one, can dispatch a solitary goblin.
The problem, however, is... 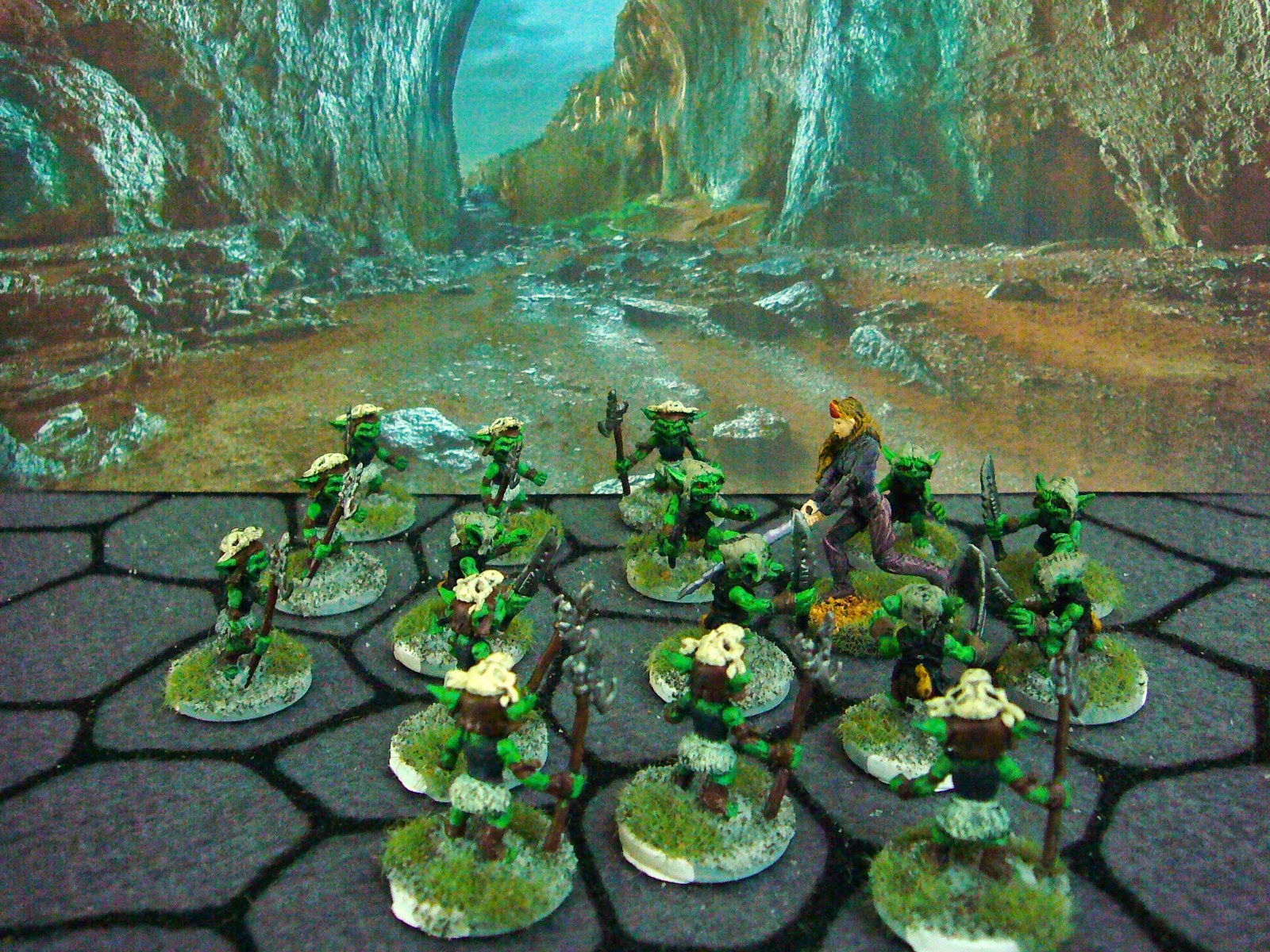 ...goblins "hunt in packs."
Several months ago, I bought a slew of Pathfinder Battles goblin packs made for the We Be Goblins Module to add to my greenskin horde.
On the Pathfinder RPG planet of Golarion, goblins are hyper little psychos, living in tribes scattered across the world.
It's not that the goblins of other worlds are any less vicious, but the ones found on Golarion push the envelope of zaniness to the point of insanity.
Once I finished painting and flocking the black bases of my new goblins, I thought I'd muster the new and old figures for a "gathering of the goblin clan."
Rulers of the Pack
Every tribe needs a leader, and goblins, whether zany or sane, are no exception.  Here are three unique characters that stand out among the gibbering masses:
"Pets"
Humans aren't the only being capable of domesticating animals.  Goblin dogs are often found guarding goblin lairs.

The Rank & File
The favored weapon of Golarion goblins is the Dogslicer.  These cheaply made weapons can be found in the hands of a tribe's heroes...

For those goblins who prefer weapons with a tad longer reach, there's these spear-wielding commandos:

Pyromania is just one part of a goblin's psychological make up.  However, for some goblins it's their calling.

Getting back to "pets," goblin dogs aren't just guard animals either.  Some of the critters have an ever-so-slightly milder temperament, that allows goblins to ride them as cavalry.

Wizards of the Coast Figures
Goblins tend to be sneaky overall , but some truly excel at it.
Looking at some "tamer" goblins, archers prefer keep their distance during any confrontation.

But then there's these armored hatchet wielders...

Among warriors, heroes and sneaks; some goblins are the closest thing to ninjas a tribe can muster.

The poorest, (and most expendable) members of the tribe, are usually pressed into service as javelin chuckers.

But when a tribe wants to capture something--or someone--then the picadors are summoned.
According to various myths and legends, goblins come in all sorts of shapes and sizes.  In today's high-tech world, goblin figures are manufactured in a variety of shapes, sizes and weaponry.
Hero Quest Figures
Here's a comparison of Paizo, Wizards of the Coast, and some old HeroQuest miniatures I embellished: 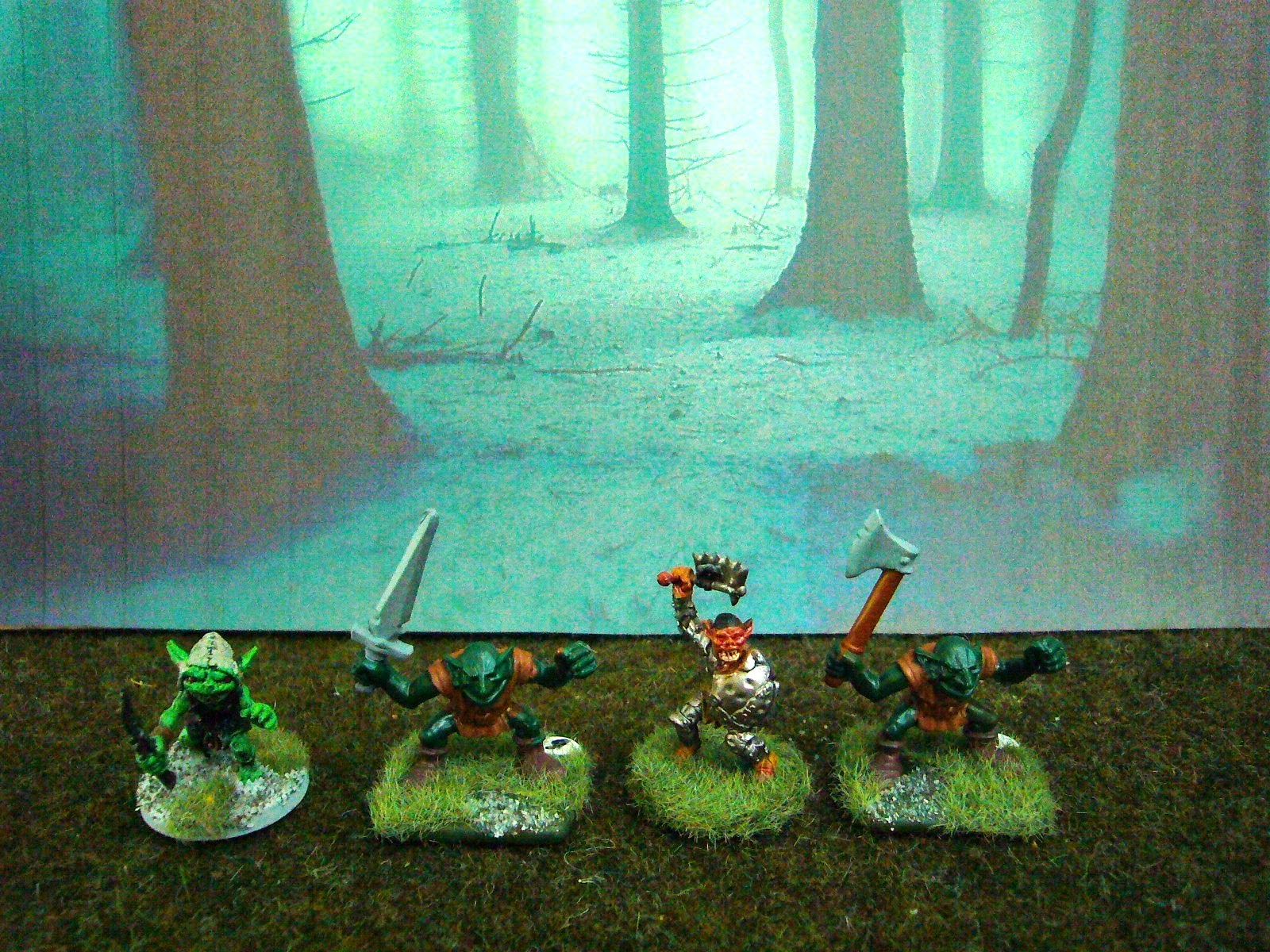 Apparently, the HeroQuest goblins have managed to manufacture, or steal, better swords than their Golarion cousins: 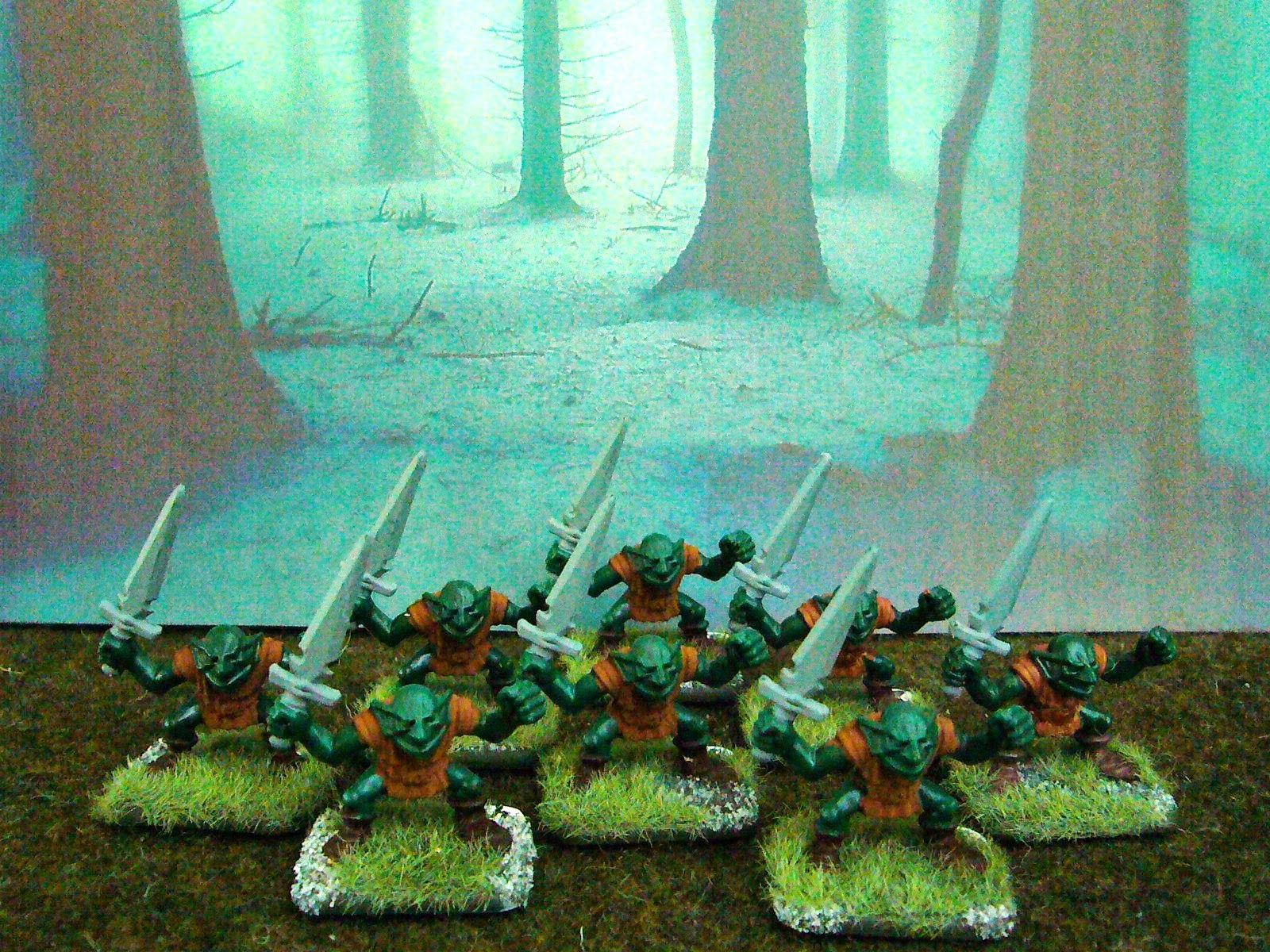 But when swords are in short supply, hatches will do. 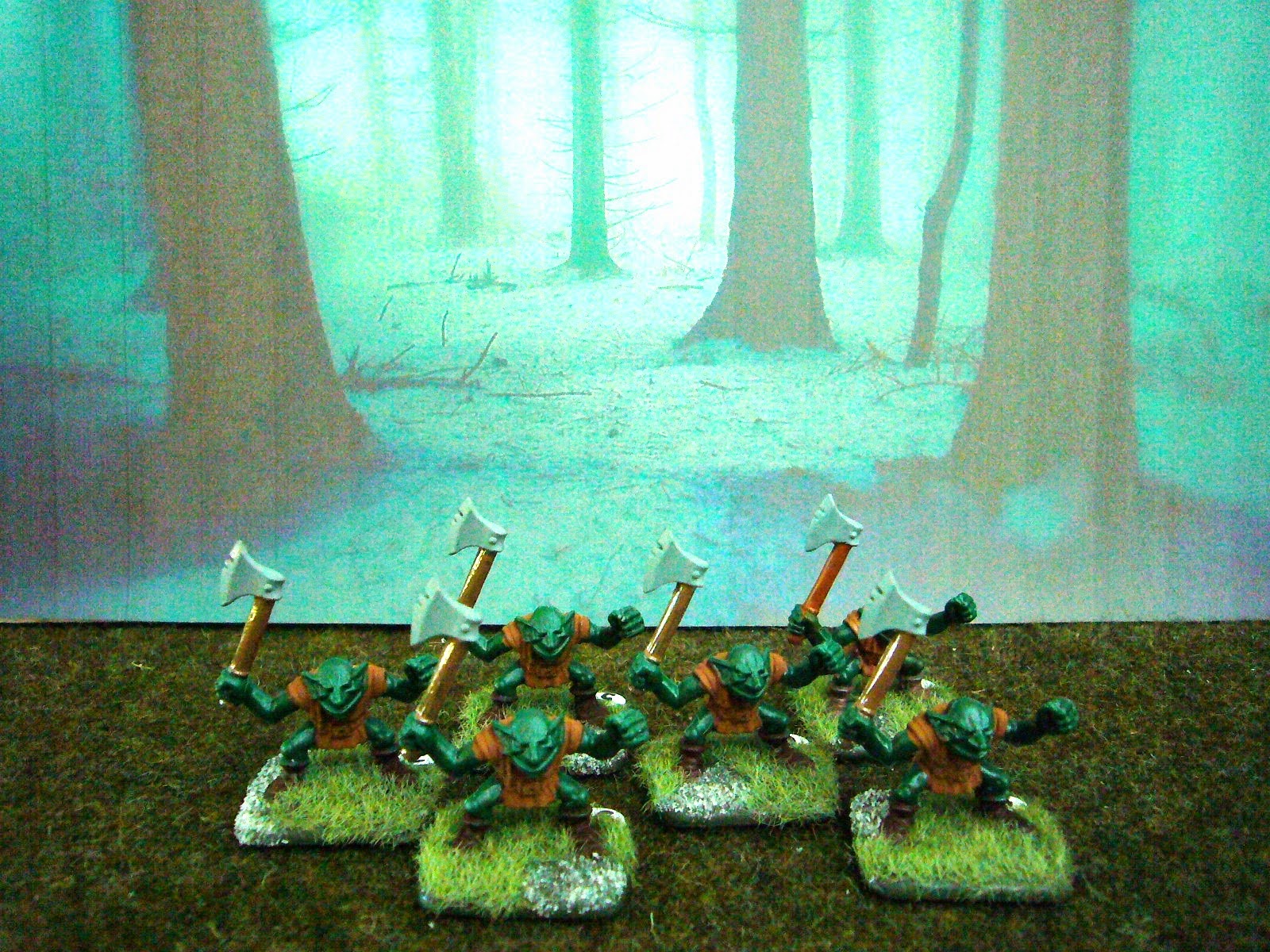 Some swords though are better than others. This band of goblins carry larger scimitars. 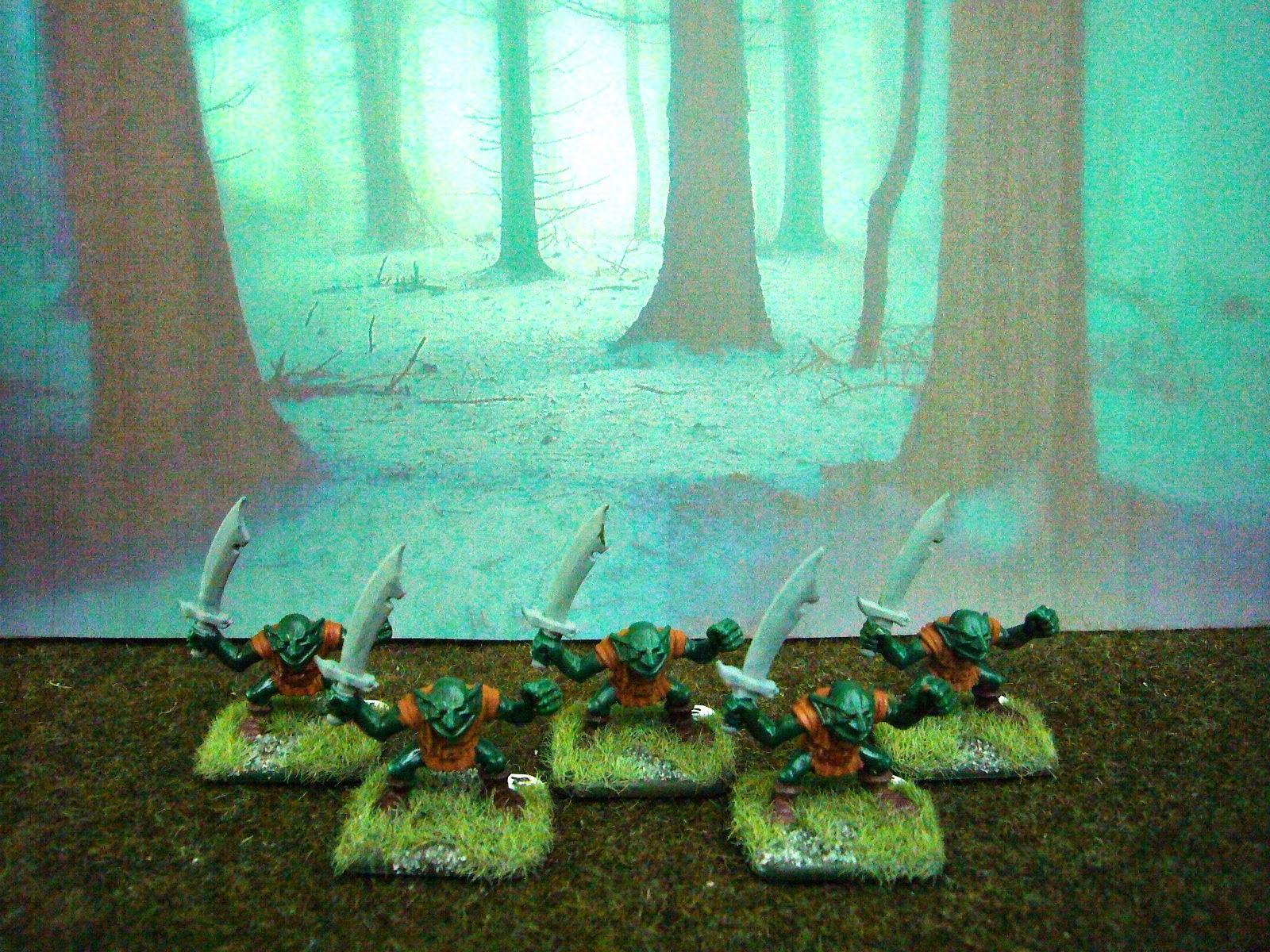 Since all the HeroQuest bad guys are rather generic, I selected a few figures to act as leaders.
The rank & file goblins, seen in the above three pictures, wear brown tunics, tied with darker brown belts, with white skull buckles.
Troop leaders, on the other hand, wear read tunics, with silver, or gold belt buckles, and carry shields.  The shields weren't part of the original HeroQuest game.  I got these from an old Games Workshop fantasy accessory kit. 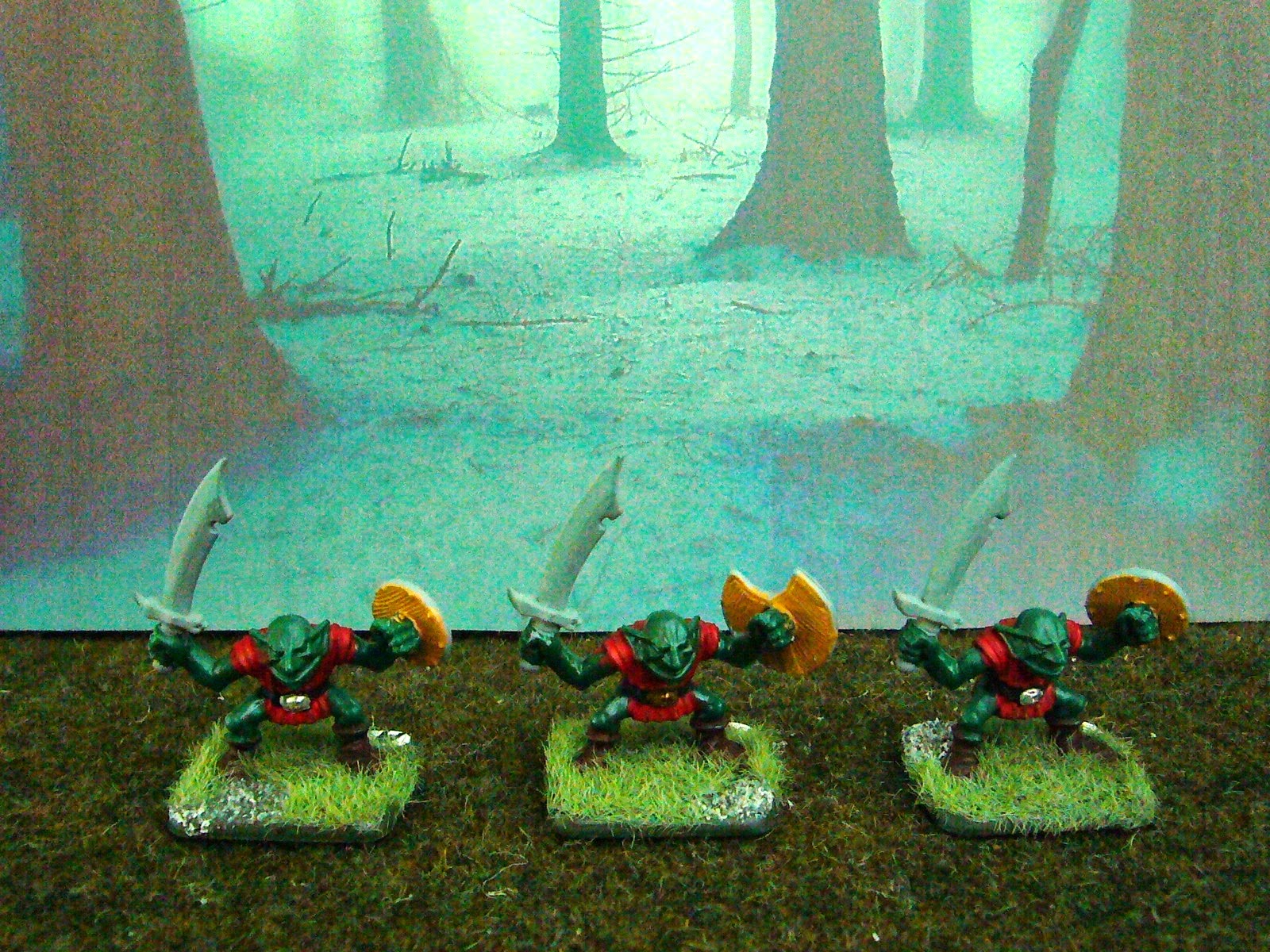 Each shield is unique.  Here's a look at the shield facings: 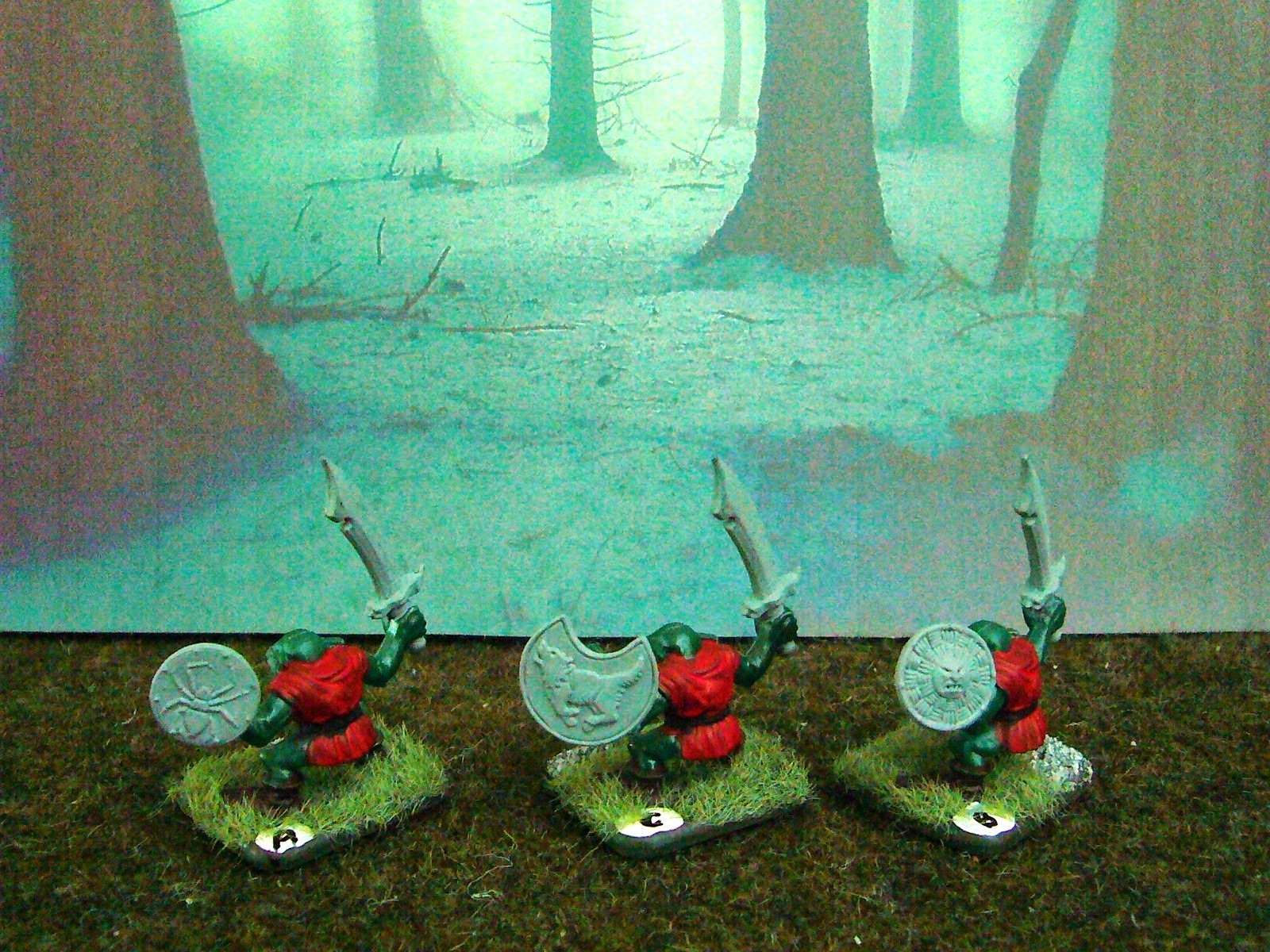 One of the main reasons why I like collecting goblins, along with orcs, is because they're very versatile.  In addition to populating the usual fantasy setting, they make great mutants in most science fiction, or post apocalyptic settings.
Posted by Ted Henkle at 6:00 AM No comments: 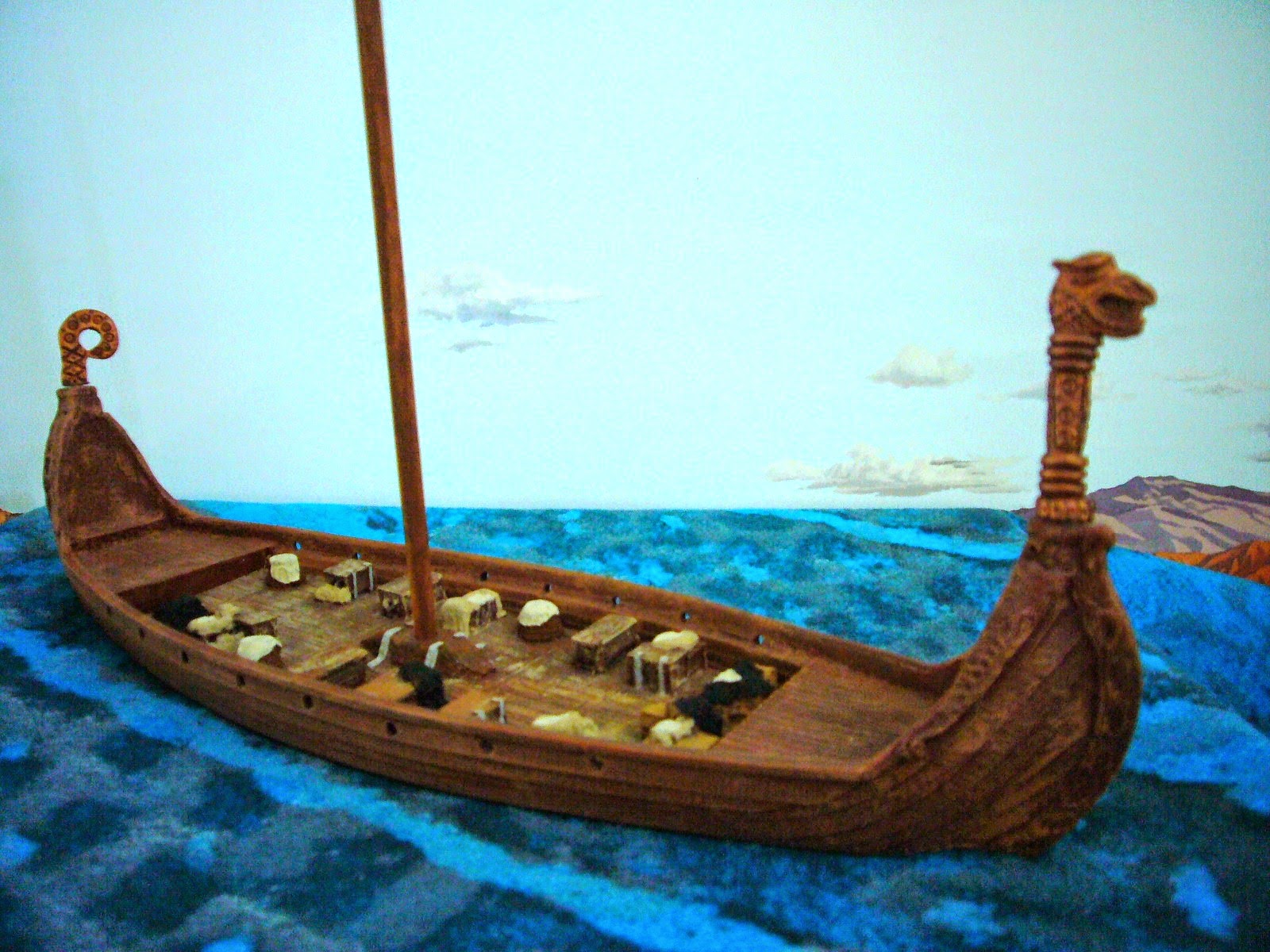 A few months ago, I wrote about the dark ages miniatures I bought from my friend Dan.  Most of the figures were already painted, which was my prime directive in buying them, and included a mostly-painted Norse longship.

While I admire Dan's initial paint job, I thought I'd add some finishing touches. 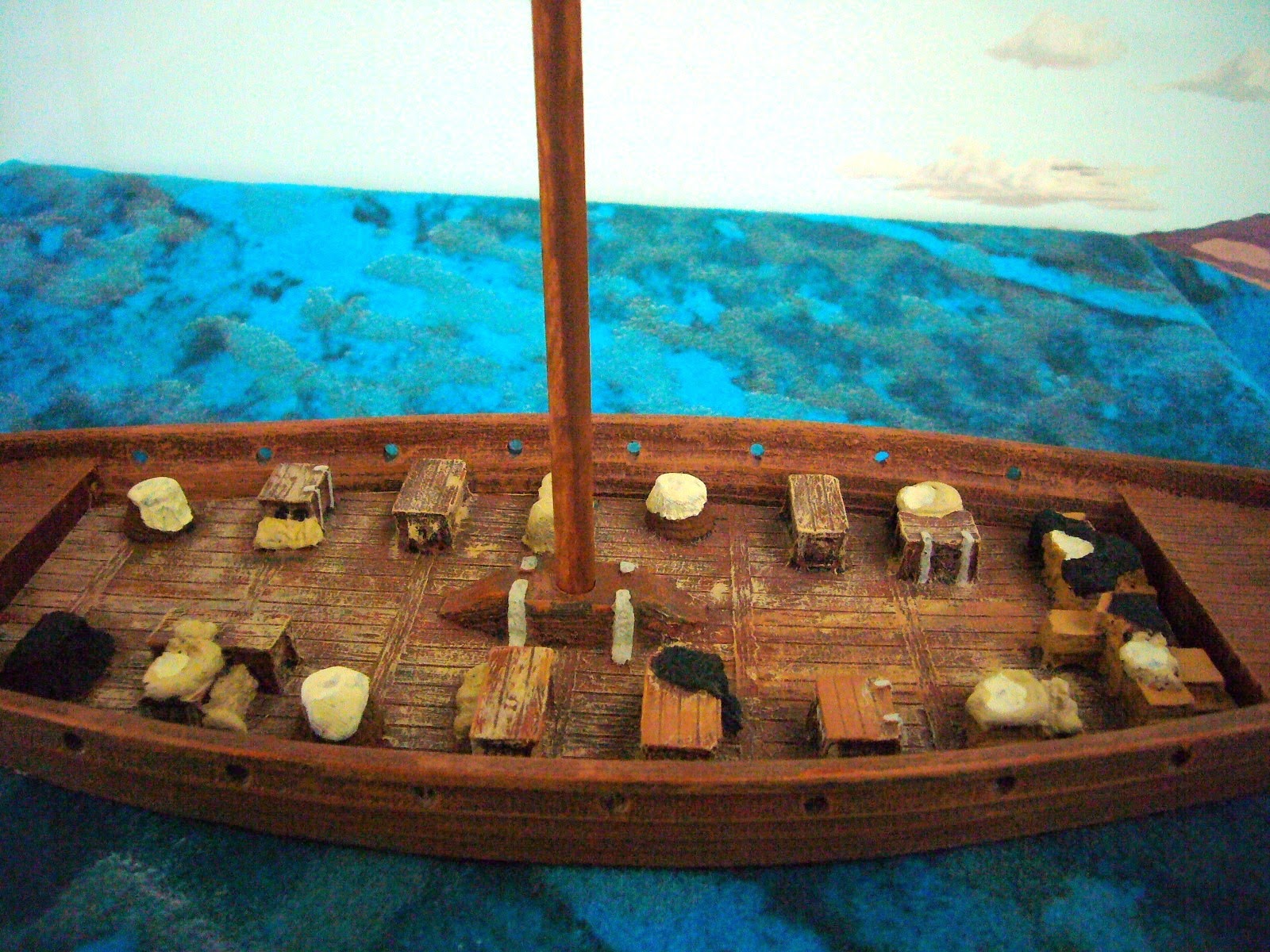 First, I bought a 5/16" dowel, which I cut and painted to use as a mast.  I don't know how long the mast should be, but I made sure it was no longer than the length of the ship.  Better for it to be too long and trim it down, than too short, right?

Anyway, I was relieved to discover I had a similar, if not exact, shade of brown Dan used to paint the ship's hull.  I then picked out several other colors and painted some of the boxes and gear on the rowing deck, so these items stand out better. 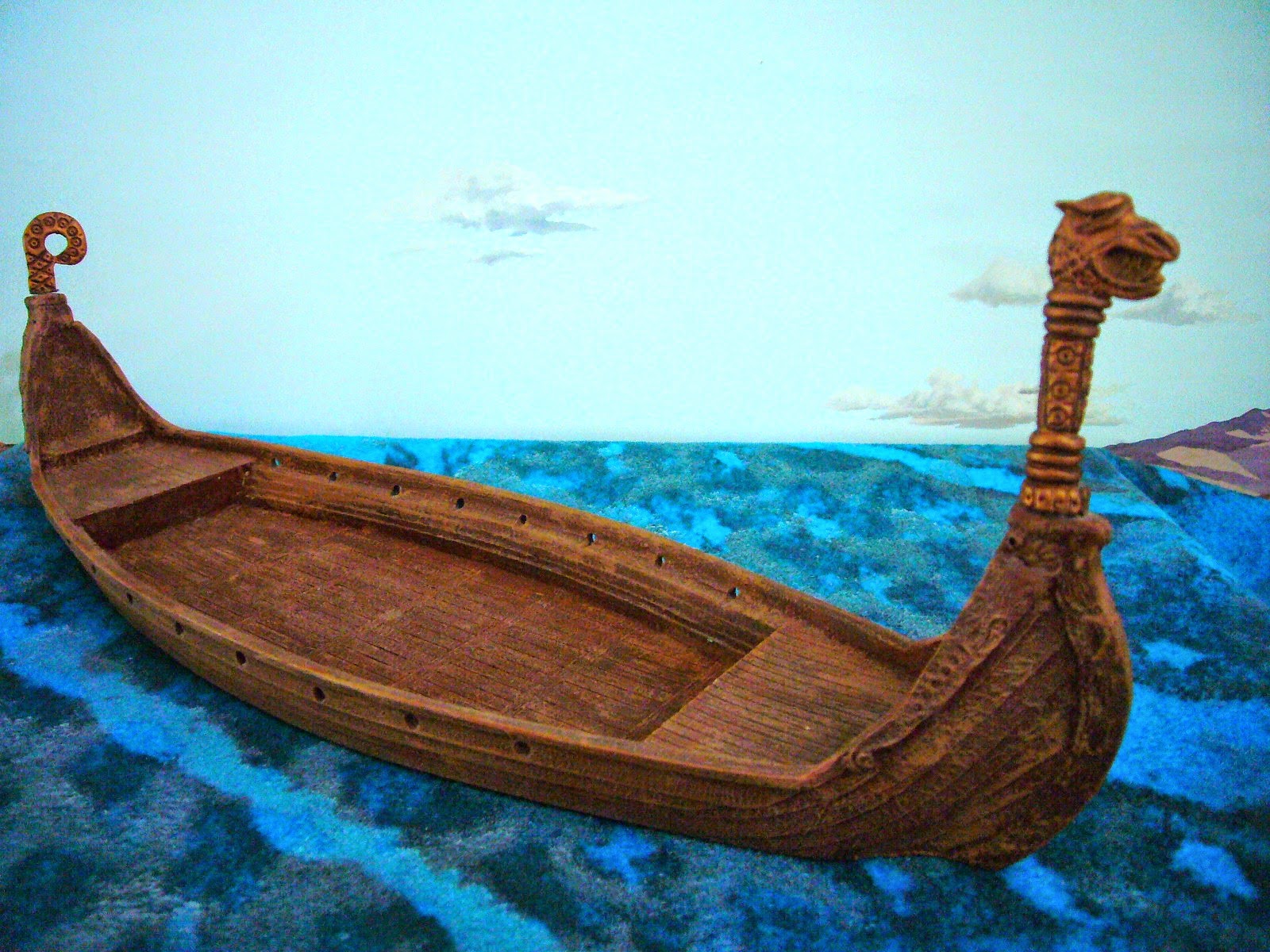 The fighting deck's paint showed some wear, so I spot-painted the bare areas with my trusty brown paint.

In addition to all the Welsh figures, who made their ignoble debut at this year's Enfilade SAGA Tournament, my acquired collection also includes some Norman and Viking figures.

When I finished the ship's touch-up job, I selected some Vikings for a photo op: 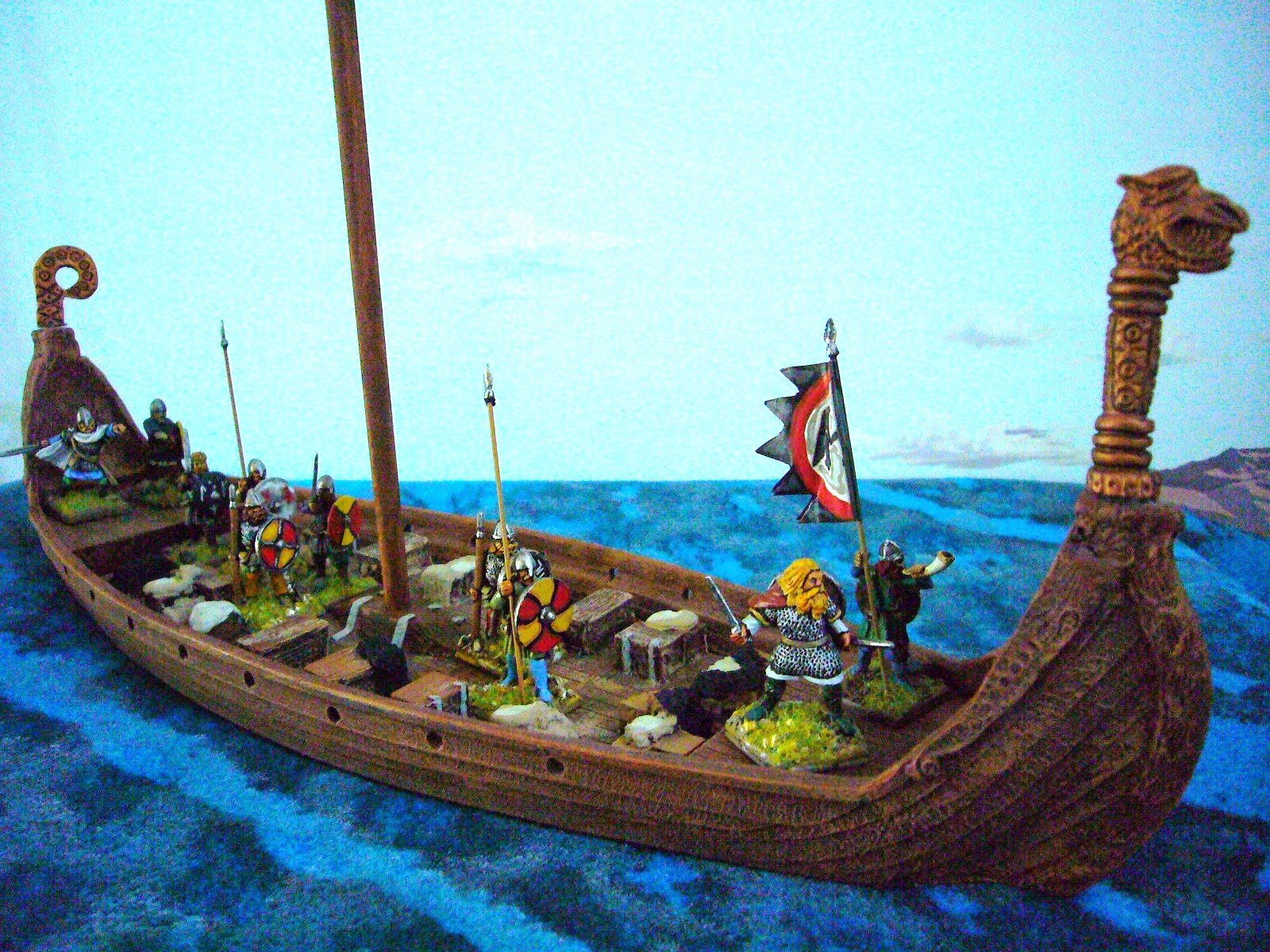 Here's a close-up of the herald announcing the arrival of a fearsome Norse warlord... 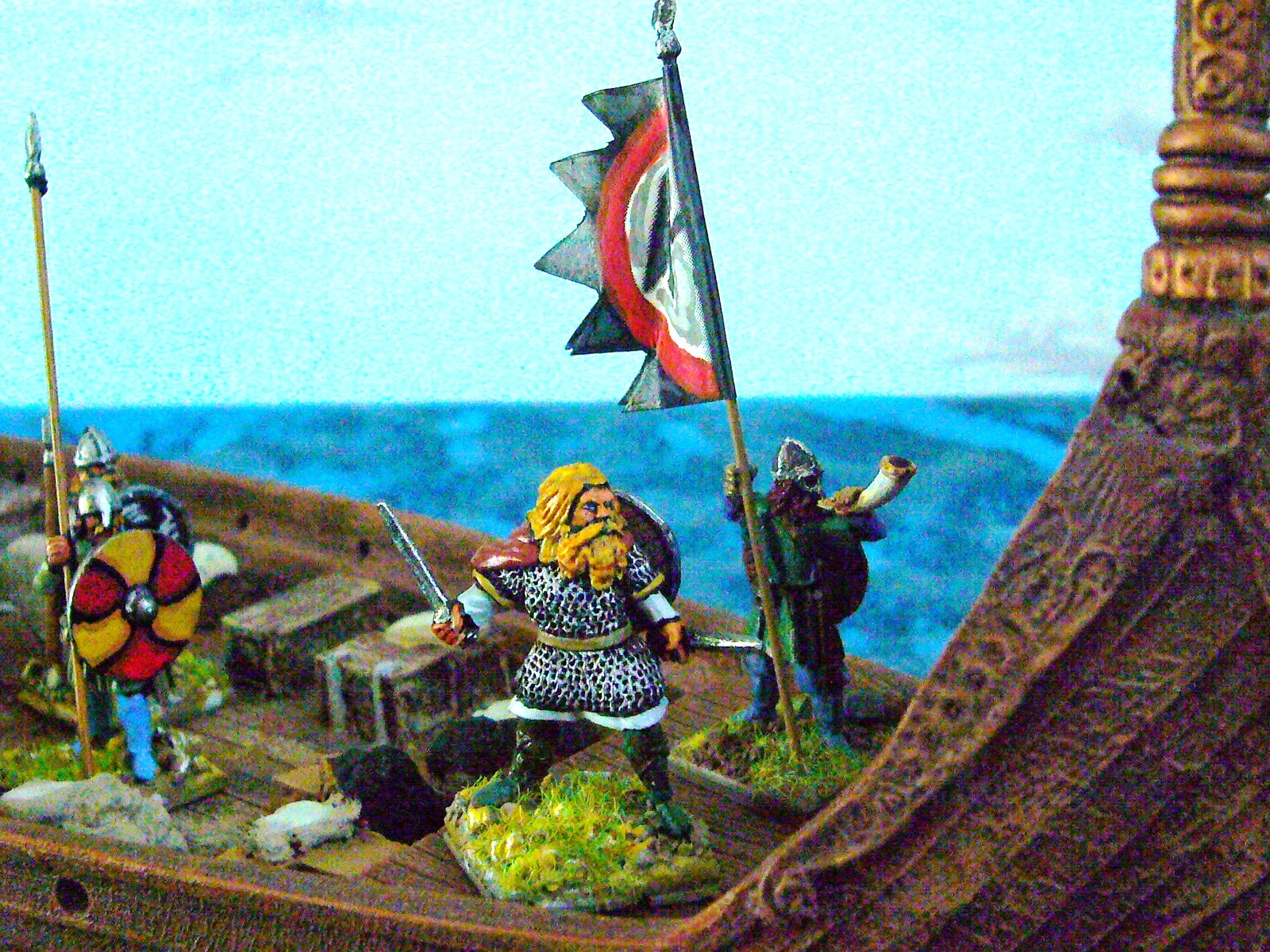 ...along with the rest of the Brun Drake's crew: 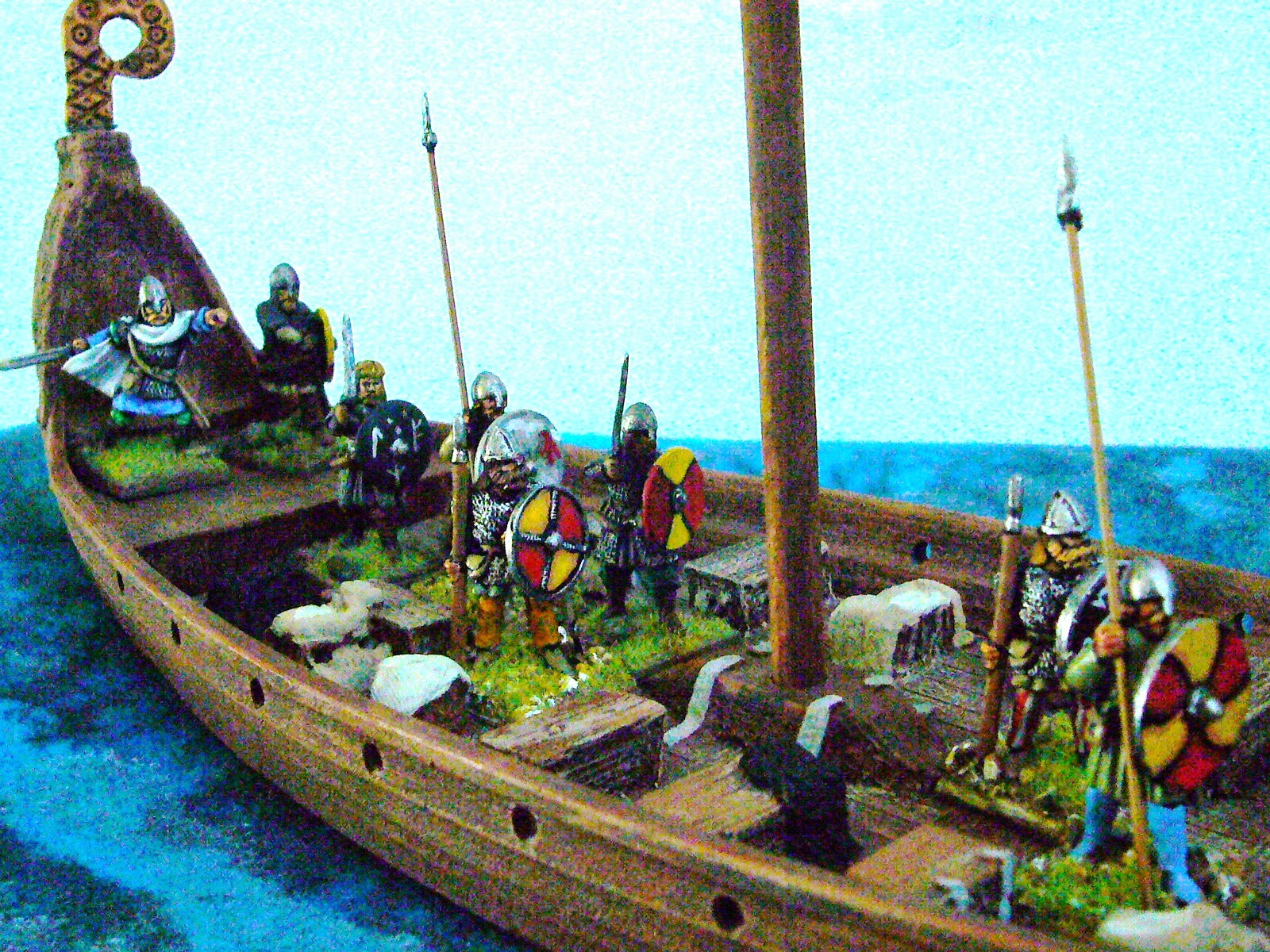 (Brun Drake is Norwegian and Swedish for "Brown Dragon."  In Danish it would be:  Brun Drage).

You may have noticed that all the figures are warriors brandishing weapons, and no one is manning the oars, let alone steering the boat or keeping the (non-existent) sail trimmed.

There's a simple explanation for this:  The rowers and deck crew are still in their package... 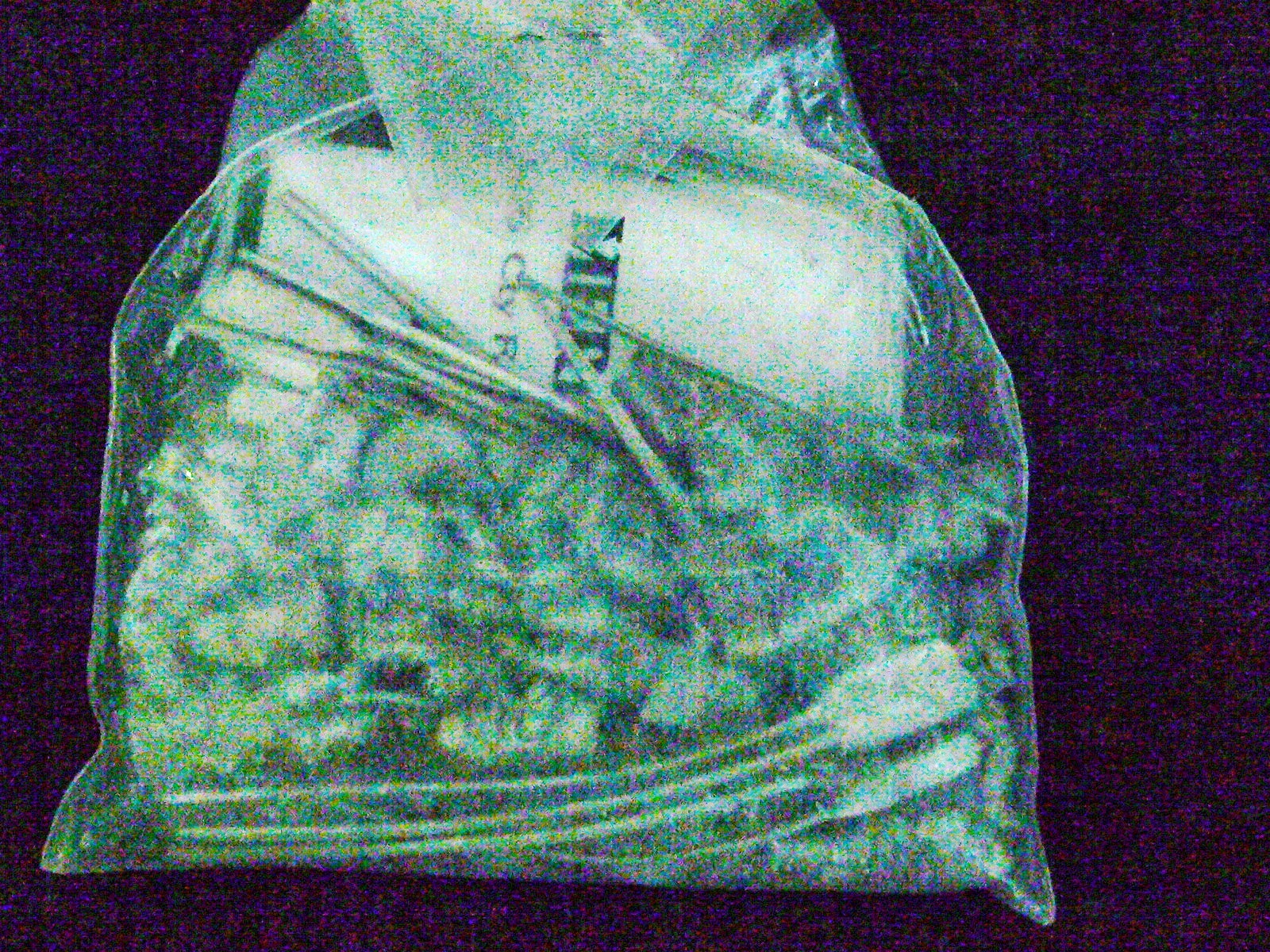 ...which will be a project for some other time.

Until that unspecified completion date, I still have a passable ship model for my Vikings to go a-viking.
Posted by Ted Henkle at 7:30 AM 4 comments: