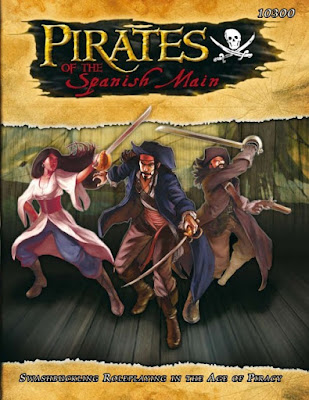 Normally, I don't care for games with the word "collectable" in the title.  This means each package contains random playing pieces, some being extremely rare, and therefore expensive.  As a wargamer, I want to know exactly what's in the package.  So when the first set of this game, Pirates of the Spanish Main (PotSM), was released, I ignored the hoopla.

A few years later though, while visiting my mom in my hometown, I ventured into the local game store, Fat Cat Comics.  While at the checkout counter I flipped through a binder containing individual pieces of PotSM organized in baseball card holders.  I liked the flat pieces representing terrain, such as islands, reefs, sargasso, and fog banks.  So I bought every bit of terrain Fat Cat had to offer.

I figured these pieces could be used for the Age-of-Sail boardgames I already owned.  Then I started scouring the local game shops in my area, and eBay, for:  Pieces of Eight coins as play money for the pirate role-playing games (RPGs) already owned, along with character cards for quick non-player character (NPC) sketches.

But since I still held on to my unassembled  collection, I decided to go just one step further and buy Pirates of the Spanish Main RPG (shortened to "Pirates RPG" to avoid confusion with the CCG).

This RPG, was produced by Pinnacle Entertainment Group and based on their Savage Worlds rules.

The book weighs-in at 255 pages, and is divided into a dozen chapters: 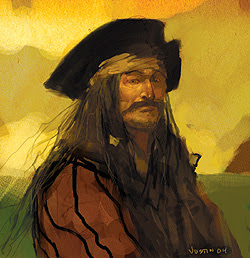 Among the illustrations similar in style to the original CCG, you'll find:

The book does a good job of incorporating the CCG material into the Savage Worlds rules.  In keeping with the CCG, this is not an historical game, but a constructed world "...loosely set in the late 17th Century or early 18th Century" (page 62).  There's even some magic and supernatural hazards players may encounter.

While I can enjoy a romp through alternate history, I wish the folks at Pinnacle, and Wizkids for that matter, put a bit more effort into being more accurate about ships and naval artillery.

For example:  "Frigates carry goods around the Main and back to Europe"  (page 118).

This isn't even close to the true definition of this well-known ship type.

Not only are these gun ratings off-base, but this also means the ships in both games are seriously under-powered.

Despite these nautical inaccuracies, I liked what I read in the Pirates RPG, which received a 4.4-star rating on Amazon.com, and a 4-star rating on RPG.Net.  I'd rate the game about the same, but one 3-star rater's comment on Amazon is worth mentioning:  That no other support material, supplements or active user community, except for a handful of downloadable material.

So if you want to make use of all those CCG ships for swashbuckling adventures of derring do, then grab a hold of an available copy of the book, or download it from Drive Thru RPG.