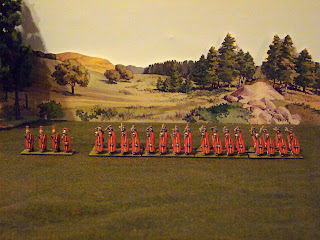 Legionaries and their general (dismounted option, off to the left). 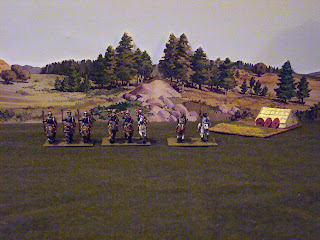 Light and heavy cavalry with the general (mounted option). 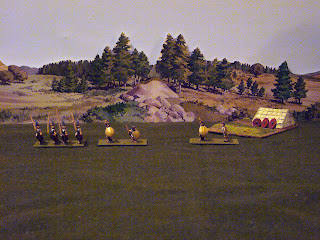 Auxiliaries, psiloi and the Roman camp. 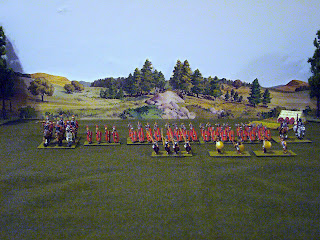 The Marian Roman Army deployed for battle with all options. (Figures painted by Dan Proctor, while the camp was painted by Adrian Nelson).
The might of Rome rested with her legionaries...
From 108 BC to 25 BC, the Roman military was founded on the "Marian Legions," based on the reforms initiated by Gaius Marius during his first consulship.
Of course it took a few disastrous battles and a stagnant campaign in Numidia to help goad the traditional-minded Romans into re-vamping their army:
http://en.wikipedia.org/wiki/Marian_reforms
Marius didn't just replace maniples with cohorts, but was elected Consul of Rome six additional times during his lifetime:
http://en.wikipedia.org/wiki/Gaius_Marius
This was a time of turbulent transition for Rome as the republic gravitated towards becoming an empire. To re-fight the battles from 105--25 BC, the DBA (De Bellis Antiquitatis) Marian Roman Army, listed as II/49 in the rulebook, is organized as follows:

One, 3-figure Cavalry unit (1x3Cv) or one, 4-figure Blade unit (1x4Bd) representing the army's general and elite fighters; along with either an additional 3-figure Cavalry unit (1x3Cv) or a 2-figure Light Horse (1x2LH); meanwhile, the backbone of the army consists of 8, 4-figure Blade units representing the legions (8x4Bd); one Psiloi unit provides a modicum of missile fire; and finally additional skirmisher support can be either one, 3 or 4-figure Auxiliary unit (1x3/4Ax) or an additional psiloi (1x2Ps).

In the DBA rulebook hieroglyphics, the Marian Roman Army Order of Battle looks like this on page 33 of the rulebook (ver. 2.2):

1xCv or 4Bd (Gen), 1x3Cv or 2LH, 8x4Bd, 1x3/4Ax or 2Ps, 1x2Ps.
The Roman Republic had many enemies--including itself. In fact a list of who Rome didn't fight would probably be shorter. However, for sake of historical accuracy and completeness here's a list of Rome's foes (taking a deep breath as I type):

In a campaign or "Big Battle DBA," which uses 3 army groups (36 units) per side, the Romans can count on the following allies--once they've been subjugated, of course:

Apparently the Scots-Irish didn't get along with anyone because the DBA Army List shows no allies for the wild men of the highlands. (See "Pass & Review #1").

Rome started out as a city-state occupying several hills along the Tiber River, so the home territory of the Republic is considered "Arable." That is, a battlefield the Romans are defending must consist of either a road or a Built-Up Area (BUA), along with any of the following: A River, Steep Hills, Gentle Hills, Woods, another Road, or Waterway.
Since "Marius' Mules" were always on the march, a Roman Army of this period has an Aggression Factor of 3.
As an aside, there are several armies with Aggression Factors of 4, the highest listed in the rules. Some of these "usual suspects" are: The Assyrians (I/25), Muhammadian Arabs (III/25), the Norsemen (III/40), Early Crusaders (IV/7), Teutonic Orders (IV/30) and the Mongols (IV/35).
Not at all surprising is it?
Meanwhile, getting back to the Romans, the Fanaticus website has a few Army Essay Pages, which include this army. In addition to the information listed above, the Marian Romans
Essay contains tidbits of history along with figure availability and recommended DBA tactics:
http://www.fanaticus.org/DBA/armies/II49.html
Sheez! Writing all this makes me want to watch my Rome DVDs!
Posted by Ted Henkle at 10:14 PM