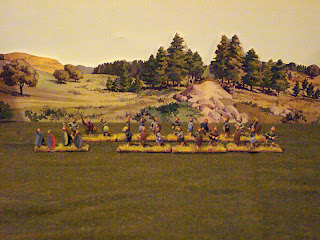 Scots-Irish Warbands and their general (foot option, off to the left). 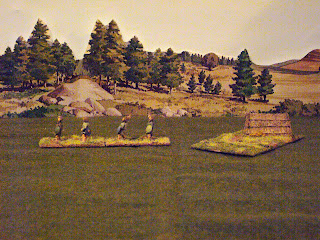 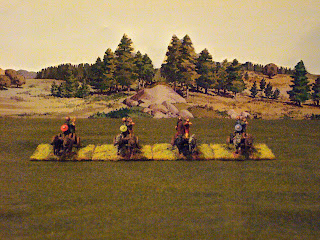 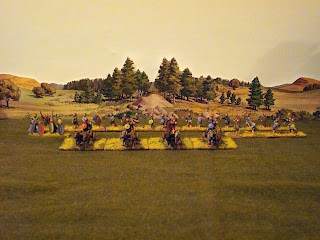 Scots-Irish Army arrayed for battle (with all options). 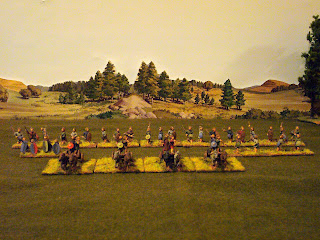 Another photo of the Scots-Irish Army. All figures were painted by Adrian Nelson.
One of the first things a new DBA player must do is decipher the game's shorthand. This is one of the many quirks of the rules-system most consider poorly written. (There's a 72-page Unofficial Guide available on Fanaticus to help explain some of the original rules concepts!).
For the sake of non-DBA players, I'll spell out the Scots-Irish composition and other qualities.
First, this army falls under Section Two--the Classical Period-500 BC to 476 AD, in the rule book and is Army # 54. This is abbreviated as II/54.
This army was active from 55 BC to 846 AD. However, sometime after 433 AD, the Scots-Irish fielded a different army.
So from 55BC to 432 AD, a Scots-Irish Army would look like this in 12-unit DBA terms:
1 Light Chariot (LCh) and the general (Gen), 2 Light Chariots (2xLCh); 6, 3-figure Auxiliary infantry units (6x3Ax); 2, 2-figure Psilois (2x2Ps); and one of the following--1 Light Chariot (1xLCh); or one, 4-figure Warband (4Wb), or an additional 3-figure Auxiliary (3Ax).
From 433 AD onward, the Scots-Irish Army did away with most of the chariots and was organized in this manner:
1xLCh or 1x3Ax or 1x3Wb with the general, along with--9x3Ax and 2x2Ps.
The enemies of the Scots-Irish were (listed in numeric order in the DBA rules):
Ancient British (II/53), themselves, Early Imperial Romans (II/56), Caledonians (II/60), Middle Imperial Romans (II/64), the Picts (II/68), Late Imperial Romans (II/78), the Sub-Roman British (II/81), the Welsh (III/19) and finally the NorseViking and Leidangs (III/40).
The "Aggression Factor" (Ag) of the Scots-Irish is "3." In each game, both players roll one 6-sided die (1d6) and add the Ag. The player with the highest result is the attacker. This also determines the Home Topography of the defender.
The home topography of the Scots-Irish is "Littoral," that is a major waterway will be one of the mandatory terrain features in a game involving Scots-Irish on the defence. Other terrain features may include Steep Hills, Marsh, Woods, Dunes, Built-Up Area (BUA) or River.
I haven't played any games using this army, but when I do it's battlefield performance will be the subject of an After Action Review (AAR).
Posted by Ted Henkle at 10:55 PM

Those are nice pictures. Are the figures from Old Glory? The backdrop is also pretty good - is it a model train one, or handpainted?

I'm sorry I missed your comment until now. I'm not sure what company made the figures, because I bought them painted. The background is from a model train shop. Once again, I'm sorry for the delay.