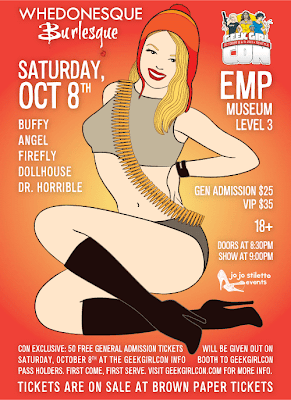 As the autumn sun set and the younglings were sent off to their suppers, the gears of GeekGirlCon shifted to more adult-themed topics.  Or at least in the seminars I, ah--just happened--to stumble into.  Tickets to the Whedonesque Burlesque show were sold out in less than 48 hours of the initial advertisement.  By the time I decided I could attend the convention, the tickets were long gone--and not a scalper in sight, within the City Center Park.

I planned on browsing through the exhibitors hall in the Northwest Rooms, but that closed at 6 PM.  So I was left with a choice of attending Women in Fantasy or Nerd Burlesque:  Translating Fandom to the Stage.  I was reading the synopses of both seminars and wandered into the Lopez Room, when a volunteer closed the doors behind me.  I was in the Nerd Burlesque seminar.

Yeah, I know, I could have walked out, but where's the fun in that?

Seriously, the remainder of this blog post deals with sensual and sexual topics and is intended for readers who are 18 or older.  And for you folks older than 18, some of the links border on the NSFW (Not Safe For Work) category.

The basic topics of discussion were:  Paying homage to the show or characters you're parodying, the importance of being comfortable with one's body in order to perform effectively; and art versus exploitation.

It wasn't until I started this blogpost, that I realized I forgot to take any photos.  It's not like any of the panelists were indecently dressed--although some folks do have issues with the women's uniform in the original Star Trek series--I simply forgot to whip out my camera. 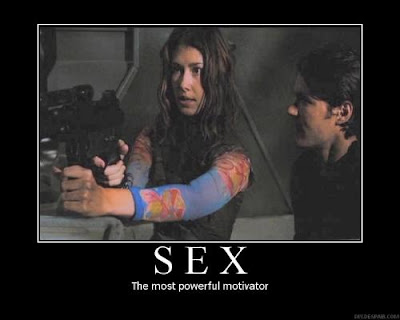 Speaking of whipping things out, the last seminar, Everything You Wanted to Know About Kinky Sex (But Were Afraid To Ask), required presenting a photo ID to the volunteers at the door.  This steamy session was hosted by:  Allena Gabosch, Mac McGregor and Cunning Minx.

What followed, was a discussion on every aspect of kinky sex imaginable.  If any topic was left undiscussed, it was only because we ran out of time.  In fact, the workshop went into 15 minutes of overtime. 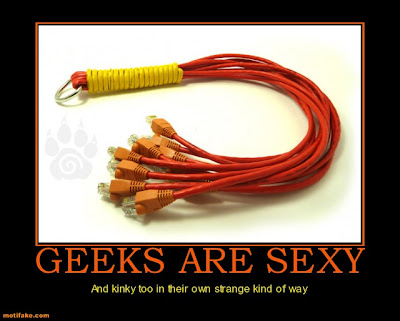 (Image: From Geeks and Sex and Kink! Oh My!)

Okay, is it really necessary to have such a seminar during a geeky, sci-fi/fantasy-type convention?

Well, Teresa Jusino, Pendard and Minx, explain this very well in their respective articles and podcasts.

Geeks like to ponder and speculate about everything:  From space travel, nano technology and yes, even to human and/or alien sexuality. This not a 21st Century phenomena either.  Back in 1967, Star Trek, opened it's second season with the episode Amok Time, about Spock's ordeal with pon farr, the Vulcan mating ritual.

Basically, geeks are willing to let their minds wander into what ever "final frontier" their imaginations--kinky or otherwise--will take them.
Posted by Ted Henkle at 10:45 PM

"is it really necessary to have such a seminar during a geeky, sci-fi/fantasy-type convention?"

Writers conferences also have some sort of "Writing Sex Scenes" seminar. Which, for anyone following this blog, will notice I'm a regular attendee to these workshops. Despite my keen interest in the subject matter, I have a difficult time actually writing sexy/sensual material.