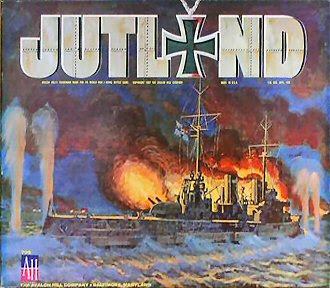 A few weeks ago, I came across another great Great War buy at Half Price Books.  This time it was the Avalon Hill (AH) classic Jutland.  My brother use to have this game when we were teenagers, but it somehow disappeared after we both joined the military.

Neither the box, nor the counters showed any significant wear-and-tear.  Only one strategic map/time record was used, along with a British Hit Record Sheet and a German Hit Record Sheet.  Oh, and a minor quibble--my game didn't come with a die.

Jutland was initially published in 1967, and a second edition was released in 1974.  I think my copy is the second edition.  I remember the Maneuver Gauges and Battle Area Markers of my brother's game being made of thick cardboard, while in my copy they're only made of thin cardstock.

Jutland isn't the only Great War wargame that I own.  Several years ago, I purchased Great War at Sea: Jutland...


...along with several other Great War at Sea (GWAS) games.

Unlike AH's Jutland, GWAS games have two distinct differences.  First, while AH's Jutland used a hex-grid map to plot fleet movements with a pencil, GWAS games come with operational maps for counters, representing task forces to maneuver on.  Second, even though AH's Jutland is considered a boardgame, there is no board.  It's more of a miniatures game using cardboard counters.  The GWAS games on the other hand, have a hexagonal tactical map that is used when two opposing task forces encounter each other on the operational map.

About the same time I began collecting GWAS material, a local game store (that is now out of business when the owner retired), had it's annual Christmas Sale.  One of the items I acquired was the hefty Fear God and Dread Nought (FG&DN).

And when I mean hefty, I'm not just talking about actual weight, but price and the depth of detailed material.
FG&DN is not a wargame--it's a World War I tactical naval simulation, or a naval reference publication with a naval simulation included in the package.
However, in addition to the scholarly research that went into making FG&DN, the ship counters are GORGEOUS!  Who needs miniatures with playing pieces this fine looking?
They certainly make AH's Jutland counters look amateurish by today's art and printing standards.
So which game do I like the best?
I can't really say.  Even though I've read the rules to GWAS several years ago, and AH's Jutland a few decades ago, I haven't played any of them.
Sad, I know, but I'm sure many other gamers have similar difficulties getting together with friends--and deciding on what game to play--especially ones that require multi-day commitments.
But for a "shot across the bow" first impression, I'd say these are the best aspects of each game, along with detailed reviews by other players:
FG&DN--The detailed research and the counters; review by Mitch Freedman on The Boardgaming Way.
GWAS--the operational maps, along with the corresponding rules; review by Paul Comben on The Boardgaming Life
Jutland--the miniature-style rules*, which are simple in comparison to the other games; review of the 1974 Edition by "The Maverick" on Boardgamegeek.
*Note:  The GWAS tactical rules are actually simpler, but don't give players a sense of naval tactics, other than closing within range of ships' guns and blasting enemy vessels with "buckets of dice" salvoes.
As the Centennial Anniversary of the actual battle is less than six months away, my New Year's Resolution New Year's Hope is to play at least one scenario from one of these games before 2016 comes to a close.
﻿
﻿
Posted by Ted Henkle at 6:00 AM

Good article, and nice painting of the Gefechtskehrtwendung.

Thanks Ken! Of all the Jutland art I found on-line, this was my favorite.