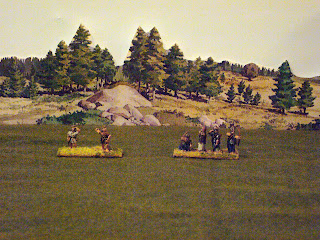 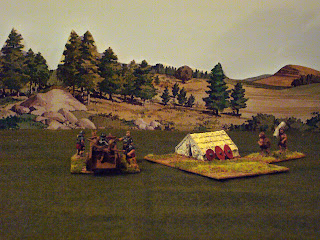 A bolt-thrower, camp and camp followers. 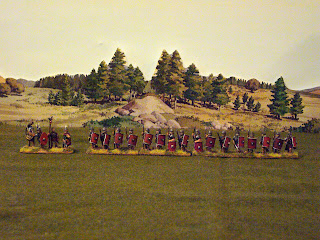 Roman legions and their commander (foot bound option, off to the left). 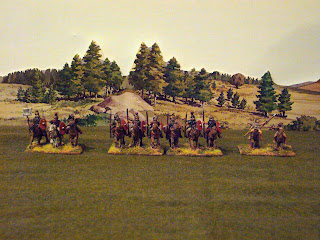 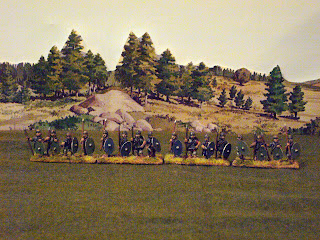 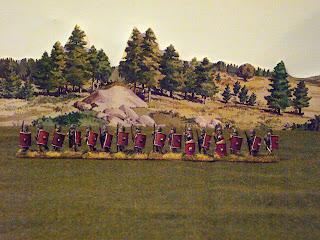 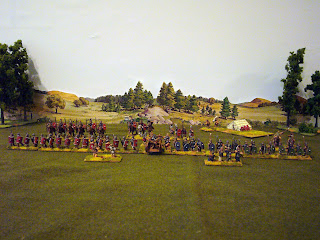 The Imperial Roman Army arrayed for battle (all options). 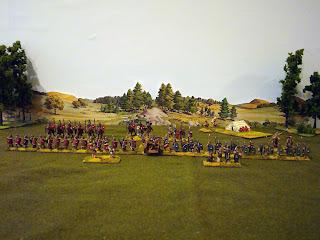 All figures painted by Adrian Nelson.

Probably no other army has been so documented and therefore, well-known among wargamers and historians, than the Roman Army.

For example, here's an on-line bibliography containing some of the material written about the military might of Rome:
http://www.csun.edu/~hcfll004/armybibl.html

The flexible formations of the legion and the iron discipline of it's soldiers invoked awe among it's admirers--and fear among Rome's enemies.

But it took more than one legion to defend a republic and conquer an empire:
http://en.wikipedia.org/wiki/Roman_army
From 25 BC--197 AD, this army extended the empire's reach, put down revolts and fought fellow Romans in two civil wars (69 and 193 AD).
In DBA terms, the Roman Army of this period looks like this:

One, 3-figure Cavalry (1x3Cv) unit or 4-figure Blade (1x4Bd) unit with the general; along with either of the following--another 3-figure Cavalry unit (1x3Cv), or a 2-figure Light Horse (1x2LH) unit, or a 4-figure Bow-armed (1x4Bw) unit, or a 2-figure Psiloi; another 3-figure Cavalry unit is include (1x3Cv); while the infantry consists of 4, 4-figure Blade (4x4Bw) units--the legions; 4, 4-figure Auxiliary infantry (4x4Ax) units; while fire support is provided by an Artillery piece (in this case a bolt thrower, 1xArt).
This army can be found on page 33 of the DBA (De Bellis Antiquitatis) rulebook (ver 2.2) and looks like this in the DBA shorthand:

1x3Cv or 4Bd (Gen), 1x3Cv, 1x3Cv or 2LH or 4Bw or 2 Ps, 4x4Bd, 4x4Ax, 1xArt.
Imperial Rome had no shortage of enemies. While times may have changed within the newfound empire--Rome's enemies didn't. In fact, according to the DBA rulebook the Empire acquired 6 more foes than the bygone Republic.
So as in the previous post (Pass & Review #2), here's another long list of folks hostile to the imperial order:
Early Libyans (I/7d), Illyrians (I/47), Thracians (I/48), Meroitic Kush (I/58), Ariarathid Kappadokians (II/14), various Arab-Arameans (II/22abe), Nomadic and Yemeni Arabs (II/23ac), Early Rhoxolani Sarmatians (II/24), Bosporans (II/25), Siracae, Iazyges and Later Rhoxolani Sarmatians (II/26), Early Armenians (II/28b), Parthians (II/37), Numidians/Moors (II/40), Commagene (II/44), Early Germans (II/47cefg), Late Judeans (II/51), Dacians (II/52), Ancient British (II/53), Scots-Irish (II/54a), Nobades/Blemmye (II/55a), themselves (II/56), Later Moors (II/57), Alans (II/58), Jewish Revolt (II/59), Caledonians (II/60) and their cousins--the Middle Imperial Romans of the Eastern Empire (II/64b).
The number of nations allied to Rome (when not at war with each other) can literally be counted on one hand. Here are the 5 allies the Romans could depend on in a "Big Battle DBA" or in a campaign:
The Arab-Arameans (II/22abe), the Commagene (II/44), the Armenians (II/28b), the Batavi (II/47d) and the Late Judeans (II/51).
As with the Marian Roman Army, the home topography of Rome is "Arable." So the mandatory terrain remains the same--a Built-Up Area (BUA) or a Road, along with optional features such as: A River, Steep Hills, Gentle Hills, Woods, another Road or Waterway.
The Early Imperial Army lost none of its combat effectiveness over its Marian predecessor either. The Romans of this period still have an Aggression Factor of 3.
This army also has an Essay page posted on the Fanaticus website. In addition to the information listed above, the Early Imperial Romans Essay contains tidbits of history along with figure availability, painting tips, miniature availability, historical rescources and recommended DBA tactics:
http://www.fanaticus.org/DBA/armies/II56/index.html
I came across Dan Becker's miniatures website which includes several DBA armies. Here's Dan's Imperial Romans page along with some great pictures of his figures:
http://www.io.com/~beckerdo/games/articles/DBA/II56EarlyImperialRoman/

For anyone interested in reading about other DBA armies, back on the Fanaticus website there's an Essay contents page listing all the DBA armies:
http://www.fanaticus.org/DBA/armies/index.html
Since many of them are currently unwritten, additional submissions are welcome. Just contact the site's Imperator Chris Brantley at:
brant@erols.com
Posted by Ted Henkle at 10:55 PM