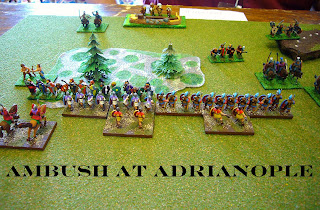 Two movies were uploaded today. The first, Amush at Adrianople was posted on to YouTube. This was my first battle in the "Power and Glory" De Bellis Antiquitatis (DBA) Tournament, hosted by Terry Griner and played during NHMGS' Enfilade 09 Convention. My opponent was Rich, from British Columbia. The battle ended in a draw with each of us losing one unit.

At least I did better than the real Emperor Flavius Valens. Adrianople, fought on 9 August 378 AD, was one of the worst military disasters of the Roman Empire:

I went on to play 3 other DBA games. I won the game following this session, but lost the last two games in the tournament. I didn't film any of these battles, because I wanted to save my camera battery for the remaining game sessions that day. Right after this game period I played wargame correspondent and filmed Chris Ewick's Kursk game, taking over 200 photos.

After this I played a Korean War game and took nearly 100 photos. Despite the large number of photos, we were 3.5 hours into a 4 hour game when my camera died. I think I have enough pictures to make a movie out of my last battle at Enfilade! 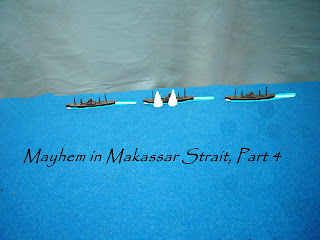 Part 4 of Mayhem in Makassar Strait was posted on the HISTORICON website this afternoon. In this episode a Dutch sub sneaks into Balikpapan Harbor where a Japanese invasion force has just landed. Mayhem ensues.

Two more episodes of Mayhem to go!
Posted by Ted Henkle at 7:26 PM