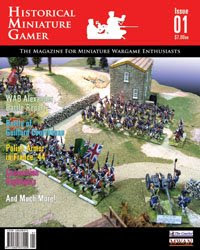 Within the current issue of Writer's Digest is an article by Jeff Yeager titled: 10 Questions Writers Must Ask Before Quitting Their Day Job

In my case it would be my day/night/weekend/holiday job...

Nearly every issue of Writer's Digest and The Writer I've read contain such cautionary tales about chucking it all and living the "carefree" life of a full-time writer.

Despite my kooky schedule, I don't plan on quitting anytime soon.

While writing is still something of a hobby for me, it doesn't mean I'm immune to some of the quirks and pitfalls of the publishing industry--albiet in a "miniature" way.

Several months ago I submitted an article to Historical Miniature Gaming (HMG) Magazine. The article was suppose to be published in Issue #12. Today I found out from the editor that not only will there be no Issue #12 but no HMG Magazine!

He didn't give me any details, but my guess is two of the "usual suspects"--the economic downturn & the internet--were involved in the demise of a publication that traces it's lineage back to the "...oldest game magazine in existence" (The Courier page on Wikipedia):

HMG was actually the merger of The Courier and MWAN (Midwest Wargamer's Association) Magazine:

The editor suggested I submit my article to one of the UK gaming magazines: Miniature Wargaming, Wargames Illustrated or Battlegames.

Miniature Wargames already published 3 of my articles (thanks Iain!) and one is pending in Battlegames. I was hoping to support some US gaming magazines, but sadly, they seem to be dissappearing faster than I can write.

HMG may resurface as an e-zine. In the meantime, it's website is still available for viewing and even some downloads: