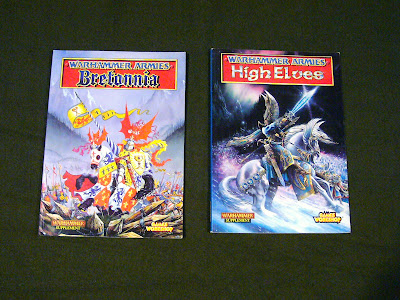 Once a week I try to make time to do a "shelf check" at the nearby Half Price Books.  I often find RPG (role-playing game) books and supplements; and once in a while some wargame material for--well--half price.
A couple weeks ago I hit the jackpot.
I got to the store just after a new shipment of books and they had to put a lot of material on the Clearance Shelves.  What I found were eight Warhammer Fantasy Battles Army Supplements for $2-$3.  True, these are older edition books, but since I don't have the latest & greatest edition of the Warhammer core rules, I thought this was a fantastic bargain.
So my "ill-gotten" gains included books on Bretonnia and the High Elves, seen above; along with... 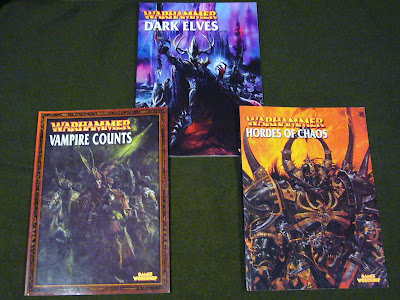 ...the Dark Elves, Vampire Counts and Hordes of Chaos... 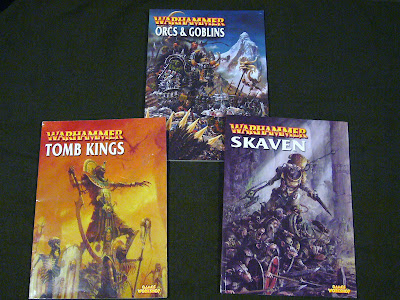 ...Orcs & Goblins, the Tomb Kings and finally the Skaven.
Warhammer is a product of Games Workshop (GW) in the UK and a full list of their current products can be found on their website:
http://www.games-workshop.com/gws/catalog/landing.jsp?catId=cat440002a&rootCatGameStyle=wh 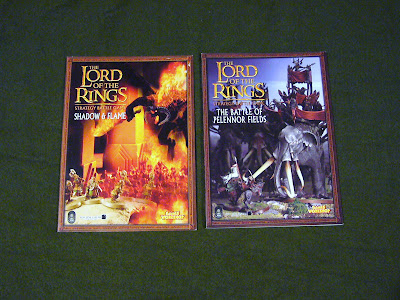 GW is also famous for producing the Lord of the Rings Strategy Battle Game (LotR). Actually it's more of a skirmish game, based on their Warhammer rules, while the recently released War of the Ring, is GW's mass-combat game.  I bought the core rulebooks for the battle strategy game, but haven't purchased any supplemental material, until now.  The above booklets, Shadow & Flame (Moria) and The Battle of Pelennor Fields (Minas Tirith), were not on the clearance shelf, but were still a good buy at $8 a piece.

GW's LotR products can also be found on the company website: 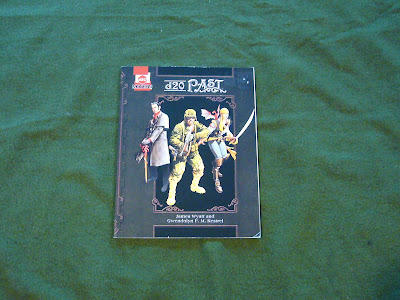 Dungeons & Dragons (D&D), currently owned by Wizards of the Coast, spawned a host of "D20" role playing games (RPGs); named after the 20-sided dice, often used to determine a player's success--or failure--at conducting an action.  One of the D&D offshoots was D20 Modern, an RPG set in today's day that may or may not include magic, near-future science fiction, or paranormal activity--or maybe all three.  I purchased the D20 Modern rulebook and Game Master (GM) Screen last year, but have always wanted to expand on this, by backtracking into history.  I found the above supplement book D20 Past, for $10 and couldn't pass this up.  Despite receiving tepid reviews on Amazon.com, I feel this will be suitable enough to run any historical RPGs, within the book's timeframe (1450--1950 A.D.).
The last D20 Modern product, Dark Matter, was published in 2006 and there's still a WotC's archived link to available to check out some on-line material :
http://www.wizards.com/default.asp?x=d20modern 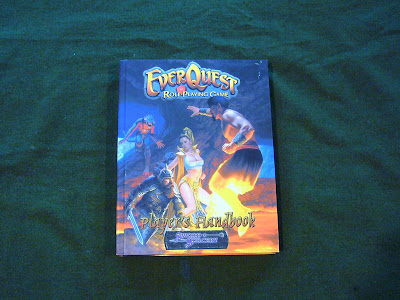 I'm familiar with, but never played Sony's Everquest, or any other on-line massively multi-player on-line (MMORPG). But in 2002, White Wolf brought Everquest to the table-top by producing an RPG, similar to WotC's D20 system:
http://en.wikipedia.org/wiki/EverQuest
I must admit, my main interest in Everquest was the awesome cover art by the late Kieth Parkinson:
http://en.wikipedia.org/wiki/Keith_Parkinson
Specifically, the Everquest cover-girl "Firiona"--which for some reason--always managed to catch my eye, but never enough to intice me to buy any of the Everquest products.  That is, until I found a copy of the core rulebook in the Clearance Shelf.

So for a mere $3, I can feel good about wasting my money on a game I'll probably never play... 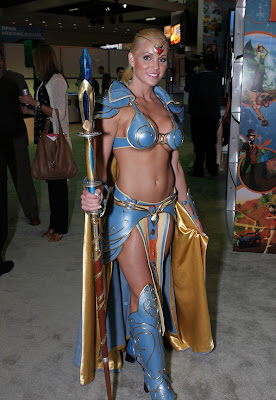 (A model posing as Firiona for the Sony booth during a game convention)
Posted by Ted Henkle at 9:45 PM