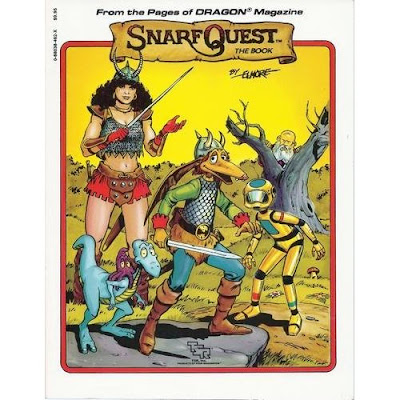 Larry Elmore is one of my favorite fantasy artists.  Anyone who has played Dungeons & Dragons(D&D) is familiar with his work, since many of his paintings and drawings graced the box and booklet covers.  And continue to do so, like this one: 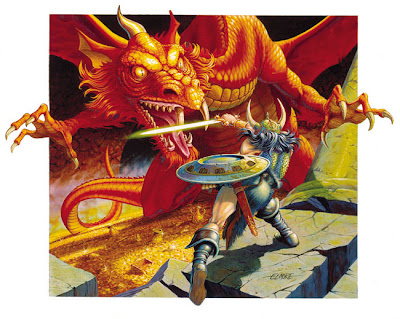 (Image:  Basic D&D, Red Dragon)
Anyone familiar with D&D's early years, probably has seen at least a copy or three of the Dragon magazine to supplement their game knowledge.  Since I wasn't a subscriber to Dragon, I only caught snippets of Snarf's escapades during its publication period.I still own numerous copies of Dragon, (which is still available as an on-line magazine), but I don't have all the issues that featured Larry's SnarfQuest, (Issues # 75--145).
When I spotted a copy of Snarfquest--The Book at Half Price Books, I snatched right away.  It was practically a reflex action.
Now here was my chance to read the complete Quest for the Crown saga!
Snarf, a blundering adventurer, is on a year-long quest to gain the most fame and fortune in order to become King of Zeetville.

Mayhem ensues.
Despite the not-quite-half-price of the book, which was about $2 less than the original 1987 listing price.  I'm very happy I bought this copy when I did, especially after looking at the collectors' prices on Amazon.com--anywhere from $30.53 to $236.04!  Judging from the folds and beverage stains on my recently acquired copy, I don't think I'll be getting top-dollar should I ever decide to sell it.
I'm happy I've had the chance to read this comedic tale in its entirety.  Elmore's story is quirky-funny to the point of being silly.  However, as a gamer, I remember many a game session that started with serious intent, only to have it degenerate into silliness.
Snarfquest was published long before such things as "Amazon Reviews" came into being.  This being the case, only 3 people provided feedback for the book--all of them gave it 5-stars.  As soon as I finish this review and log on to Amazon, I'll add another 5-star rating.
Non-D&D players may, or may not think Snarf's misadventures are as funny as us gamers do.  However, anyone into fantasy literature, or graphic novels should still get a kick out of it.  The book also contains a page of character stats for D&D and AD&D, (see my previous post on OSRIC gaming), along with an additional full-color story that wasn't part of the Dragon's series.
Despite being out of print, interest in Snarf continues.  Several years ago, a role playing game and a card game were developed, which received mediocre to moderate praise.
But fear not, you long-time comic strip fans: 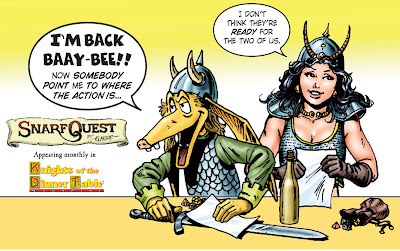 Starting this month, Snarf will start running on Knights of the Dinner Table (KoDT) Webstrips sometime this month.
KoDT is popular in it's own right for parodying D&D and roleplaying in general, so SnarfQuest will fit right in with Kenzer & Co.
Posted by Ted Henkle at 8:00 PM

Cool stuff Ted. Reminds me that I haven't been to Half Price Books in a long time. Best, Dean

Hey Dean! Sorry for the long response time. I've been off line for a bit, then down with a cold. Anyway, I certainly recommend hitting 1/2 Price Books as often as possible. I've found all sorts of stuff, from history books, role-playing game supplements and graphic novels there. Each store is stocked differently, so I try to check out a variety of outlets.