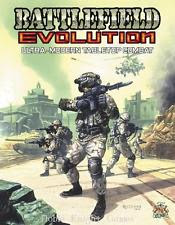 On May Day I mentioned in-passing that I purchased a bunch of Battlefield Evolution pre-painted miniatures.

Since I got the figures, I figure I should probably read the rules.

Produced by Mongoose Publishing back in 2007, Battlefield Evolution was billed as a fast-paced, skirmish set of rules for ultra-modern combat in the near future.

This "advanced" rule book weighs-in at 94 pages, of which only 49 pages constitute the rules portion; which includes an Introduction, Preparation and Building an Army chapters.  The last 45 pages consist of chapters on Scenarios, Campaigns, Model Buildings construction an example of play (Contact at Qafir), an Index, some sample campaign maps; along with a few pages of news releases (i.e. fluff).

The rules themselves are easy to understand.  Any unit can conduct two actions per turn.  These usually are:  Move, Shoot, Charge, and Ready.  Attacks such as shooting and charges are resolved by rolling the damage dice, which are D6's or D10s (six-sided or ten-sided, depending on the weapon systems).  Rolls of "1" are automatic misses, while "6s/10s" are automatic hits.  Units receive beneficial modifiers for being in, or behind cover.  Defending units may also receive an armor save against non-automatic hits.

When a force's incurs about 75% casualties, it reaches it's Shatter Point and withdraws from the battle.

There are no details about any of the units listed within the rules.  Such information is found on the unit cards which are included in each boxed set, or at least they should be.

If I were to only assign a rating to the rules, I'd give the Battlefield Evolution book 3-stars.  They're a good, basic set of rules, especially for beginners, convention game masters, or even seasoned gamers who don't want to delve into complicated rules.

The one problem in this aspect is there's no Quick Reference Table (QRT).  Everything is dependent on players having access to the unit cards, which aren't available unless a gamer has bought one, or more (all?) of the box sets.

But this isn't the only problem with the Battlefield Evolution Advanced Rules book.  The biggest is the production quality.  This hardcover, printed in China, is cheaply made.  Even though it's nine years old with no signs of wear-and-tear, the binding should still hold the book together.  My copy is falling apart.  The paper itself feels brittle and easy to tear.

As someone who likes to make gaming-based webcomics, I'm usually reluctant to criticize someone else's artwork.  But in this case I'll make an exception.  While the pictures of the miniatures used throughout the book are good, the campaign maps leave much to be desired.  If I were in the position of convincing my fellow wargamers to dispose of their disposable income, I'd want to provide them with a top-notch product.

So production quality is 1-star.

One of my favorite political commentators often remarks "nothing dates faster than THE FUTURE."

True, Battlefield Evolution's fluff takes place in the fictional country of Kerakhistan, but it still has a dated feel.

While the publishers aren't to blame for failing to foresee the rise of the Islamic State or the Syrian Civil War; they over stated, or avoided, a number of items in their vision of what 2018 is suppose to be like.

The European Union (EU) has solidified into the European Federation, when it's actually struggling to cope with external and internal issues, like Russia's invasion of Crimea and Ukraine, along with the mass Muslim migration and the possibility of Britain leaving the EU.

The People's Republic of China's Army (PLA) gets glowing praise for modernizing to near-western standards.  However, the publishers say nothing about China's history of draconian domestic politics, or belligerency beyond its borders.  (Maybe because they didn't want the Politburo to put the kibosh on publishing this book?).

Unnamed Muslim nations have joined together in a loose association called the Middle Eastern Alliance (MEA) to fight the invading infidels.  It's seems as though conflict stems from the European Federation, along with America and China, trying to re-assert their colonial rule over the middle east.  There's only a vague reference to giving Islamic troops a "religious zealotry" modifier, but nothing on what religion motivates the troops to become zealots in the first place.

A lot has happened since.

So forget the fluff.

Just re-label the miniatures and develop more plausible scenarios and campaigns, unless you're setting your game in a alternate reality.

You can buy hard copies of Battlefield Evolution on Amazon.com for $5.77 and up.  Or, you can buy an ebook directly from the publisher.

The miniatures, which will be the subject of a future post, can be harder to come by.
But you can use similar figures from other manufacturers.

The book you've reviewed is the original "advanced" rulebook. I highly recommend you try and get hold of the later revised edition "Battlefield Evolution: Modern Combat". It was produced right at the end of the game's lifecycle and is much less tied to the miniatures Mongoose released, having stats for a wider variety of weapons, vehicles and equipment. Army lists include British, German, US Army and Russian, in addition to the original games Chinese, USMC and MEA The rules were also tweaked and tightened up in line with other later games that used the same mechanics (including Starship Troopers, I believe).

It's definitely a better option if you wanted to try play the game now, using currently available figures. Available in PDF from Wargames Vault, good luck finding a hard copy.

I'll be on the lookout for a more updated copy, along with checking out the Wargames Vault. I've purchased stuff from WV several times already.