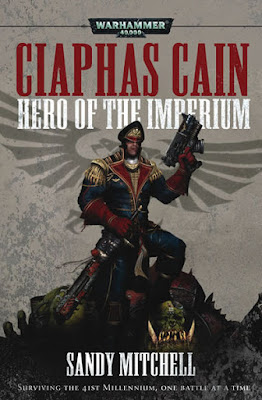 My slow journey into the grimdark of the 41st Millennium continues, but only from an observer's point of view.  That is, I've read through several WH40K rule books, and supplements, along with a couple of novels, but still haven't played a WH40K game yet.

Last year, I was ready to quit reading any more of these tiresome tales until I came across the name of Ciaphas Cain while trolling WH40K topics.  I didn't delve too much into the on-line entries, lest I come across plot spoilers, but the term "dark comedy" was a recurring theme caught my attention.

Then, a few months back I discovered a copy of Ciaphas Cain, HERO OF THE IMPERIUM at Half Price Books.

Sandy Mitchell's work is a much-needed reprieve from the dystopian downer narratives of the previous novels I read, not to mention the propagandist prose of the game's rule books and supplements.

To the citizens of the Imperium of Man, Ciaphas Cain and his hygienically-challenged aide Gunner Ferik Jurgen are...

...but to readers like me they're the voices of sanity in an insane galaxy.  As a result, the series has spawned a plethora of fan art.


Ciaphas Cain, HERO OF THE IMPERIUM, is actually an omnibus containing the author's first three novels and three short stories. We meet our slacker-turned-reluctant-hero in the short story Fight or Flight.

Getting what he thinks is a cushy assignment with an artillery regiment, far from the front, Cain tries to flee from a Tyranid attack--only to stumble across the main swarm.  He turns back to warn the regimental fire base, and is set on the fast track to being the Imperium's greatest hero.

And I was instantly hooked.

The stories are written in the form of a memoir similar to George MacDonald Frazer's Flashman Papers with editorial anecdotes by Inquisitor Amberley Vail.  (Inspiration was also drawn from Edmund Blackadder).

Ciaphas Cain, HERO OF THE IMPERIUM, has earned anywhere from a 4.4-star rating on Goodreads, to a 4.7-star rating on Amazon.com to a 4.9 on Barnes and Noble.

The single 2-star rater actually loved the book.  His main complaint had to to with the quality of the book's binding.

A couple of 3-star raters thought the author's work was okay, but didn't care the the light-hearted tone, and preferred the "...grim darkness of the far future..." to remain grim.

However, even the high-raters noted the author's overuse of phrases and repetitious narrative.  In one story, I noticed our hero said he drew his chainsword twice in the same scene.  In another story a male secondary character is referred to as a female on one occasion, causing me to backtrack a couple of pages.

Still, I loved the book (5-star rating!).  This is probably because, unlike other science fiction settings like Star Trek, Star Wars, Firefly/Serenity and Traveller; I don't take the WH40K 'verse with any sense of seriousness.  So the author's style fits how I'd perceive life in the 41st Millennium.

A complete run-down of Ciaphas Cain novel series can be found on the Lexicanum, along with a Cast of Characters.

Cain novels are great for de-stressing. You just let him take the wheel and enjoy 40k's literary "scenic route".

Gabe: I love your "40K's literary scenic route" analogy! I've picked up the next three in the series. But I've heard a lot about Dan Abnett's "Gaunt's Ghost" series. I'll read the first book and see if I like it compared to Cain.

This book made laugh hard in a very dark place. I picked this one up by chance at an MWR tent in Iraq on deployment... I have to say I enjoyed it largely because it was not the usual WH40K universe, it was the reluctant, and lazy guy who is a hero because $#@% just lands in his lap and he gets lucky nobody notices. Wish more authors in the WH40K universe didn't take that 'fluff' too seriously as well! After all, 40K is best taken with a grim humor, and it shows in the early GW artwork.

I'm glad to hear Ciaphas kept you entertained while in Iraq!
I agree with everything you said about the book vs the usual grimdark propagated by Games Workshop.
Your comment about GW's early work is also spot-on. It started out being dark humor, but then GW took it's grimdark seriously.