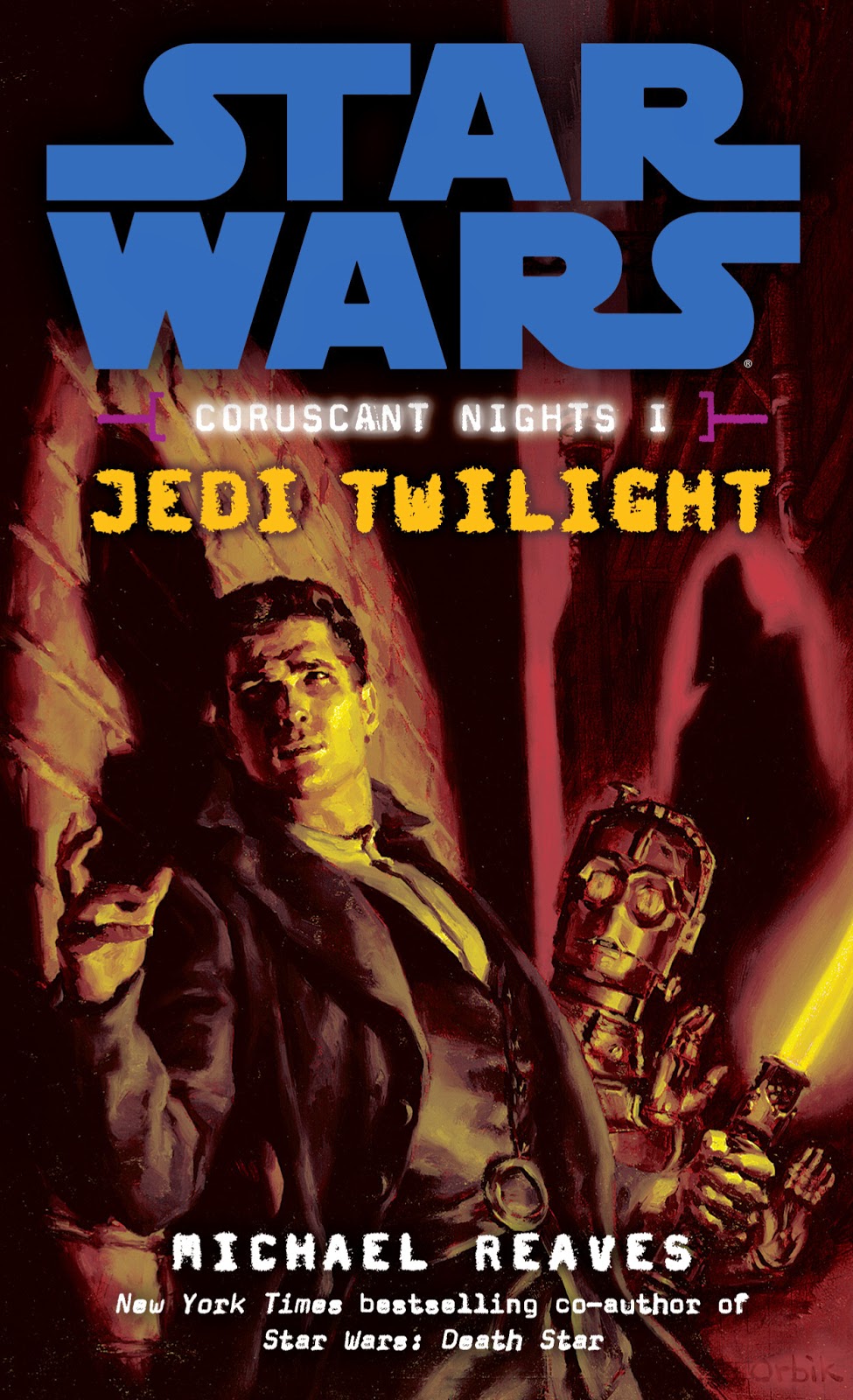 Last year, I acquired a taste for noir fiction after reading The Maltese Falcon, The Tough Guys and Femme Noir--The Dark City Diaries.  Then everal months ago, I stumbled across Michael Reaves' Coruscant Nights I: Jedi Twilight at a book store and was intrigued enough to buy it.  I finally took it down from my bookshelf and read it.

This tale takes place shortly after Palpatine's coup and the Great Jedi Purge.  One of the survivors, Jax Pavan, has been eking out a living among the denizens of Coruscant's underworld.  That is, until a dying wish from his former Jedi Master sends him on an urban quest to aid the budding rebellion against the new Galactic Empire.

The story involves a MacGuffin that Rebellion leaders and various crime bosses are scrambling to find.  Meanwhile, apparently above it all, Darth Vader has taken an interest in finding Jax Pavan.

I enjoyed reading the book, the first in a trilogy, but give it a solid 3-stars, instead of the average 4-star rating on Amazon.com.  Out of the 49 reviews so far, 37 readers gave Jedi Twilight either four, or five star ratings.

The less-than-four-star raters complained about continuity glitches, a boring plot, wordiness in the narrative and stilted dialogue.  I didn't notice any of these specific problems--maybe because I do all my leisure reading while on a cardio machine, so I'm always appreciative of the diversion.

Seriously though, I thought Jedi Twilight was a noble endeavor to create a "Star Wars noir," but it fell short in evoking a noir mood.  I don't think this is entirely the author's fault.  Michael Reaves attempted to meld a noir story into the most famous space opera in science fiction.  And despite the detailed descriptions of Imperial Capital's crumbling foundation, the space opera mood prevailed.

Jedi Twilight also reminded me of what I like and dislike about reading a novel series based on movies and/or TV shows.  (I read a lot of Star Trek novels during my tween and teen years, but then only a handful of Star Wars books).

There are a couple things I like about stories set in pre-established worlds.

First, we're introduced to new characters beyond what we see on the big or small screen.

And second, there's a lot less exposition in a familiar series.  That is, the author doesn't have to explain what a Wookie, stormtrooper, Klingon, Romulan, or whatever are.  On the flip side though, the target audience for such books are the fans, or at least folks who are familiar with the original movies/TV shows.  Anyone unfamiliar with the setting could feel lost faster than the Millennium Falcon could make the Kessel Run.

Which brings me to what I don't care about expanded universe stories.

First, there's redundant references to the original show.  I swear every Star Wars book I read involving Han Solo and Princess Leia, they'd allude to their I love you/I know moment in every story.  It was an awkward scene to begin with in an otherwise great movie.  Some of us would like to issue a cease and desist order against beating dead tauntauns.

Even if the story isn't centered around one of the main characters in the original works, there seems to be a requirement that one of them has to be involved, even if only in a Six Degrees of Separation sort of way. In Jedi Twilight, Darth Vader's hunt for Jax Pavan is what keeps the tale firmly within the space opera realm.

I admit, these are my personal biases.  Other readers may feel differently.

But biases aside, I enjoyed Jedi Twilight enough that I may consider picking up the sequels Street of Shadows and Patterns of Force.