GeekGirlCon 2014 Panel Discussion #2: How to Be A Nerd for a Living

My last GeekGirlCon blogpost dealt with getting a job with a gaming studio.  The second panel discussion, How to Be a "Nerd for a Living," was an interview with the five panelists on how they succeeded in the nerdy careers.

The panelists who made their nerdy dreams come true were:

Since there was only 50 minutes to discuss the panelists' career paths, the session focused on two main questions.

How did you get started (in your nerd career)?

Susan:
I studied acting, but felt better in front of a microphone than a camera.
Jina:
I graduated with a finance degree, but didn't want to be an accountant.
Jamie:
I went to school as a professional make-up artist.
Rebecca:
I loved comics and literature, then became a fan of comic strips and webcomics.  I self published a comic book in 2006.
Heidi:
I studied architecture in college, but diverted to engineering.  I've been in the gaming industry since 1996.

Some notable quotes from this question:

"No experience is wasted"--Rebecca.
"I got fired from every crappy retail job I had"--Jaimie.
"Retail is worse than fetching coffee for people"--Jamie.
"If your job is close to what you want to do in Life, you're probably in a good spot"--Heidi.

How do you get a nerd-type job?
Heidi:
Take classes in the subjects you are interested in.
Susan:
There are voice-over jobs available in every city.  Get a demo tape and an agent.
Jina:
The Customer Service Department is a good foot-in-the-door position.
Jamie:
Shadow someone.  There's a high up-front cost to being a make-up artist--$10,000 for your kit.
Rebecca:
The barrier for entry into webcomics is very low.

"Follow your heart, but take your brain with you"--Jaimie

How to Make Webcomics

Sometime after the panel discussion I found Rebecca's booth and sought her advice on webcomics.
I'm concerned that my main webcomic, Breakout from Bongolaan, is becoming unwieldy using Blogspot's template--if it isn't already.  Rebecca and her husband recommended a Word Press plug-in by Phil Hester called Comic Press, which I think means this product.

Anyway, I plan on doing a bit more research before I change Breakout from Bongolaan's format.  But my chat with Rebecca Hicks made the trip to GeekGirlCon totally worth my while.

By the way, I didn't get a good picture of Susan Eisenberg, because a cosplayer's Galactus helmet was in the way.

So here's another photo of the panel with a bit of fanboy fawning thrown in: 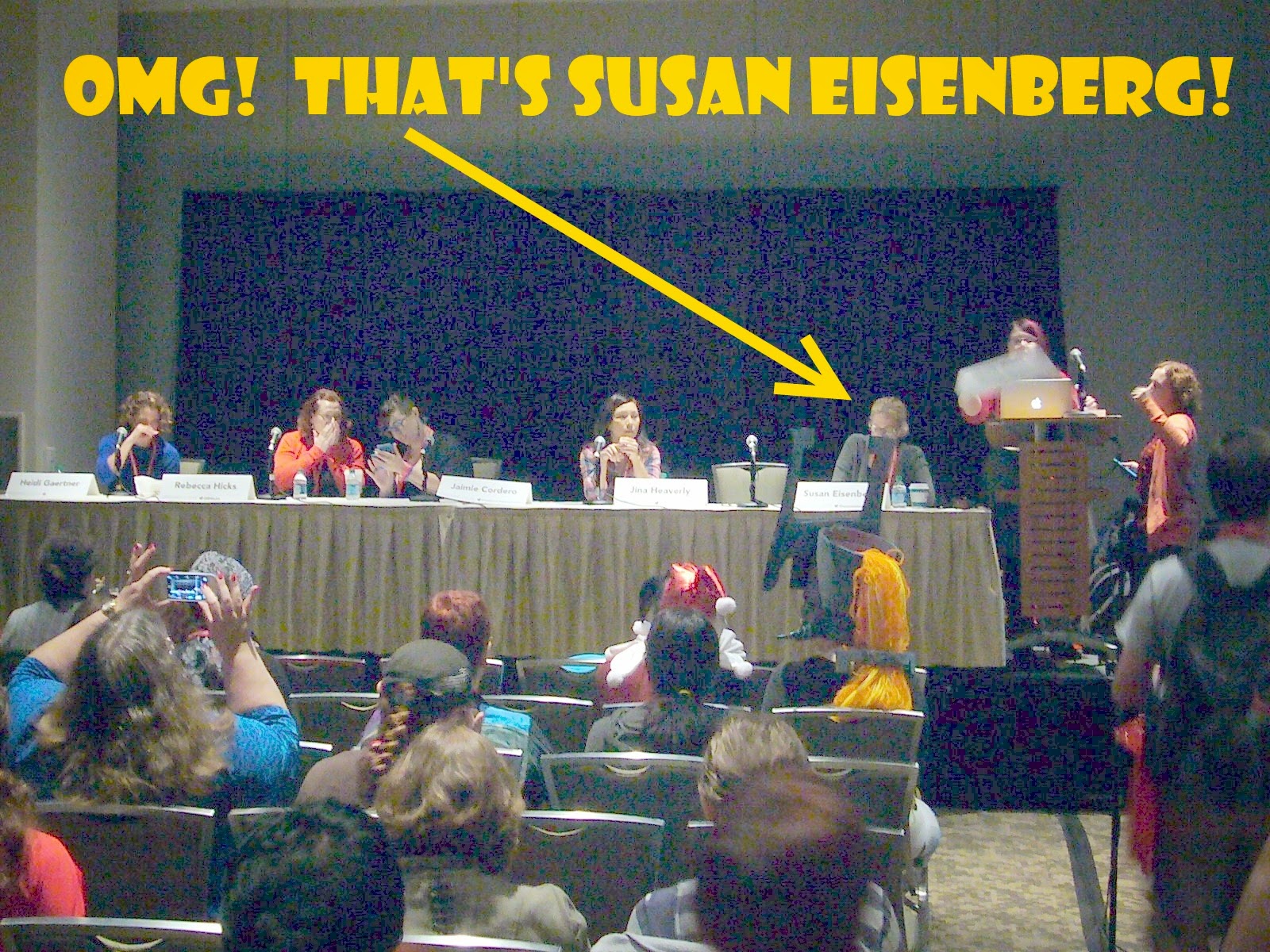 Nerd For A Living said...

Thanks for this really nice post and recap of our panel at GeekGirlCon. We like how you broke down some of the best points and quotes from our speakers.

This panel is now available as a podcast on our site:
http://nerdforaliving.com/episode-27-how-to-be-a-nerd-for-a-living-geekgirlcon-2014/

Thanks for attending and sharing!

Oh you're welcome! Thank you for putting on such a great panel, and attaching your podcast link in the comment. I hope to attend next year's GGC.