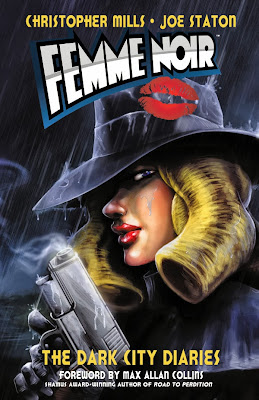 Beyond Sherlock Holmes I've read very little crime fiction and none of the hardboiled variety.
Until now.
I picked up Femme Noir--The Dark City Diaries during the same shopping spree I acquired several Queen and Country books.  And I like Femme Noir for the opposite reasons I liked Queen & Country.
While Queen & Country is a series with realistic plots and settings, illustrated in stark black & white; Femme Noir is Christopher Mills and Joe Staton's homage to pulp magazines.  The artwork is rich with color and the stories themselves boil over with two-fisted action.  You'll find no personal introspection by our heroine here.
In fact, no one--not even the reader--knows the identity of the crime-fighting dame, decked out in a black trench coat, fedora and fishnet stockings. 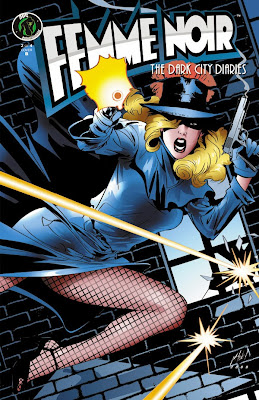 It could be:
1. Vanessa DeMilo--the orphaned debutante daughter of a late mob boss
2. Dahlia Blue--the sultry nightclub singer, or,
3. Laurel Lye--ace reporter for The Eclipse.
None of the women are blond and each one manages to disappear when the unnamed vigilante in stiletto heals makes her appearance.  The Dark City Diaries is set in Port Nocturne, a fictionalized city closely resembling San Francisco, during a 1930s-ish time frame.
Published in 2009, about two dozen copies of The Dark City Diaries are still available on Amazon.com (9 brand-spanking new and 15 used, at the time of this post).  Twelve people reviewed Femme Noir, giving it a near-grand slam 5-star rating.  The reviews themselves were entertaining to read, even the one 4-star rater who wrote this gem:
It's a rich blend that borders on giving one the pulp equivalent of a sugar headache -- but Femme Noir is too good to stop reading.
While I'm giving Femme Noir another 5-stars, a review like that is tough act to follow!

Thanks for the kind words. Joe Staton and I are hoping to have a follow-up volume out late next year.

You're welcome Christopher! I enjoyed the stories and artwork. Thank you for introducing me to hardboiled crime fiction. I look forward to your follow-up volume!