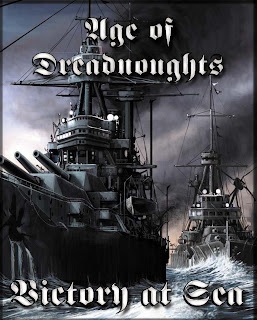 Age of Dreadnoughts (AoD) is Mongoose Publications' latest release in their Victory at Sea (VaS) series. The original VaS is a popular "beer and pretzels" set of rules covering World War II naval combat. This popularity is, in part, due to the coincidental release of Wizards of the Coast's (WotC) Axis and Allies: War at Sea in 2007. So in one fell-swoop naval miniature enthusiasts had a set of easy rules and pre-painted, plastic ship miniatures to fight their table-top battles.

AoD in contrast, takes a step back time-wise to the battleship clashes of the First World War. The hardcover book weighs-in at 128 pages. But despite the length, the rules themselves comprise only 28 pages. The remaining portions of the book consist of: Scenario and campaign guidelines (29 pages); the Fleet Lists for the UK, US, German, Russian and Turkish navies (75 pages); along with 2 pages of black & white playing aids.

Each game turn is divided into several phases: Pre-Game Scouting (1st turn only), Initiative, Movement, Gunnery Attack, Torpedo Attack, Air Attack and the End Phase. The time-scale of each turn is not defined and the surface-scale is roughly 1 inch = 500 yards, which is geared for 1/6000 to 1/2400-scale miniatures.

Avoiding a tedious Order Writing Phase to reflect simultaneous movement, AoD employs the simpler "Igo-Ugo" method. This is where winning the initiative each turn is important. A player holding the initiative can either move first, or force his opponent to tip his hand by having him move first instead.

The Pre-Game Scouting Phase is an abstract way of determining which player's scout ships are more effective (or lucky) in finding the enemy. The winner receives a positive modifier for several Initiative Phases. As previously discussed, the Initiative Phase determines who moves and fires first. In the Movement Phase, players move ships singly or entire squadrons of up to 6 vessels in an alternate-move fashion. That is, Player A moves a ship/squadron, then Player B does, and so on until all ships and/or squadrons have finished moving. Opponents then fire at each other, if within range, during the Gunnery Attack Phase. If any ships are carrying torpedoes or there's aircraft present, then these weapons are moved and their attacks resolved in the Torpedo Attack and Air Attack Phases, respectively. The End Phase is where fire-fighting and damage control are conducted as well as any book keeping issues are completed.

Ships can attack enemy vessels within range of their guns (main, secondary and tertiary) or torpedoes. For each weapon eligible to fire or attack, one or more Attack Dice (AD, a 1D6) are rolled. If a die-roll is equal to or greater than the ship's Target Number, a hit is scored. For every hit, roll the number of Damage Dice (DD, a 1D6) listed in the weapon's DD Score. For every die-roll equal to or greater than the target's Armor Value, 1 point of damage is inflicted on the enemy ship. When a ship's damage points reaches zero, the ship sinks.

While AoD is geared for easy, balanced tournament-style games, 5 historical scenarios are also included along with an abstract campaign game. The Fleet Lists provides the information on the various ships of the main protagonists: The British Royal Navy and the German High Seas Fleet. Smaller fleets from the US, Turkey and Russia are also included. However, no other national navies are currently represented.

Having played a couple of solitaire sessions of VaS, I found the AoD rules very familiar. While helpful, you don't need to know anything about VaS to understand the game mechanics of AoD. The rules definitely lean towards "game" as opposed to "simulation" and is ideal for beginners. It's also a great set of rules for more experienced players who want to take a break from more complex games.

Now for a salvo of bad news. While the rules are easy to follow the book is poorly edited. Starting on page 3, there is a reference to "Chapter XX." At first I thought this was Chapter "Roman Numeral Twenty." When I came across another "Chapter XX", along with a "page xx," I realized there is no Chapter "Roman Numeral Twenty." In fact, none of the chapters are numbered. While I can forgive a few glitches like this, I find this to be extremely irksome, especially when every page or chapter reference in this $30 rulebook is printed this way.

The use of "xx's" or other symbols is a writer's technique used while working on a rough draft. You're typing-up page 6 for example, and know you need to reference a particular fact that will appear later, but you don't know yet where it will end up within the book. So you type an "xx," or "insert pg # here;" or anything else to remind you to go back and fill in the xx's with the appropriate data. This helps maintain a writer's creative flow.

In this case, it's as if the publishing company grabbed the author's rough draft and express mailed it to the printers without bothering to edit or proofread the material. Or better yet--getting someone else proofread the rules. This basic mistake should have been easily caught long before this rulebook went to print.

I like the rules and give this product a 4-star rating. I'd love to give it a 5-star rating but the lack of proofreading is a bothersome issue for this $30 book. I'd be more forgiving of this if AoG was Mongoose Publication's first naval warfare product.

AoG is, as previously mentioned, derived from VaS while VaS in turn, is derived from Babylon 5: A Call to Arms, space combat game. So Mongoose Pubs should have plenty of experienced folks on hand to get the proofreading right.

The on-line errata damage control prevents this rulebook from sinking to a 3-star rating.

So if you're interested in World War I table-top naval combat and want an easy set of rules, then Age of Dreadnoughts fits the bill.

Just be sure to download the errata and grab your pen...
Posted by Ted Henkle at 12:52 AM