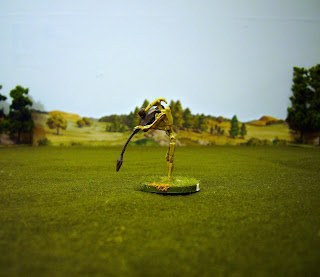 No wonder the Trade Federation developed the Super Battle Droids.

Seriously, I'm a big fan of Wizards of the Coast (WotC) Star Wars Miniatures. In fact, I'm also an avid collecter of their Dugeons & Dragons Miniatures and especially of their Axis & Allies: War at Sea/Task Force naval miniatures. I even have an entire case of the upcoming Flank Speed on pre-order.

Despite my admiration of these pre-painted products, some miniatures may have one drawback: Being made of soft plastic, a figure's pose may not be as, ah...firm, as should be. The Droopy Droid pictured above is a Battle Droid Sniper, Collector # 23/40, and is part of WotC's Clone Wars Set.

Another point to consider when purchasing WotC miniatures: The figures in most sets are packaged at random and each miniature has a Rarity Factor. This is similar to collectible card games, where figures are rated according to how many are produced and referred to as: Common (C), Uncommon (U), Rare (R) and Very Rare (VR).

This is fine in order to generate enthusiasm among collectors but can be irritating to wargamers. Buying packages of unknown figures is not a cost-effective way to raise legions of dreaded stormtroopers, strike teams of rebel commandos and hordes of battle droids.

My solution is to buy a Starter Kit and/or Booster Pack of each set in order to see if I "win the mini lottery." That is, lucking-out and getting a rare or very rare figure. Then I'll buy miniatures from sites that sell them individually.

My favorite site is The Miniature Market:

I can usually get "rank & file" figures for less-than $1 to $3 each and characters for $4 on up; sometimes less if a they're having a sale. The Miniature Market also offers a "stimulus package" of free shipping--IF you spend $75 or more. Which, of course, I always do. (Hey, my shopping cart's already at $60, what's another $15, right?).

All the figures stand on black bases which can be painted and flocked at the owner's discretion. Since I find these distracting, I spent the extra time and effort in creating appropriate terrain for each base.

WARNING: Use acrylic paint when painting the bases! Oil-based model paints don't adhere well to the soft plastic and remains sticky even after drying.

I give WotC's miniatures a 5-star rating and am very happy with everything I've purchased--even the Droopy Droid.

For more information on WotC's Star Wars Miniatures and Role-Playing Game, log on to:

http://www.wizards.com/default.asp?x=starwars
Posted by Ted Henkle at 10:25 AM