A functioning and efficient logistic system is crucial for a nation to maintain its military forces in the field, or at sea.
During World War II, Imperial Japan's war effort became strained due to the naval and merchant shipping losses, from the growing allied superiority at sea and in the air.  This forced the Imperial Japanese Navy (IJN) and army to sneak supplies onto their beleaguered islands using simple Sampans.
I few months ago, I purchased two packages of Warlord Games' latest release of small sampans in their Cruel Seas line:

I just put the final ink-wash touches on my dozen vessels last week: 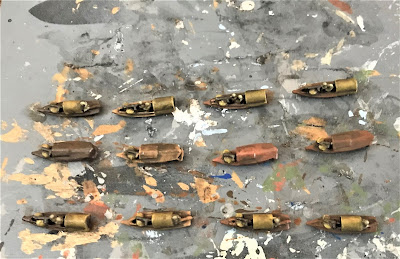 I attempted to distinguish each group of three, divided by 4 vertical columns in the above photos, using different shades of brown.
According to the Cruel Seas rules, these vessels operate in groups of three.
I'm satisfied with the results, despite the ink-wash blurring the final results.
This is actually the second batch of sampans I painted.
Last year, I purchased the Imperial Japanese Fleet package, along with an additional package of large sampans:
I assembled 4 sampans under full-sail, and 2 representing boats with "furled sails" by not attaching them to the masts.
Here's both versions of the sampans with the mid-ship shelter: 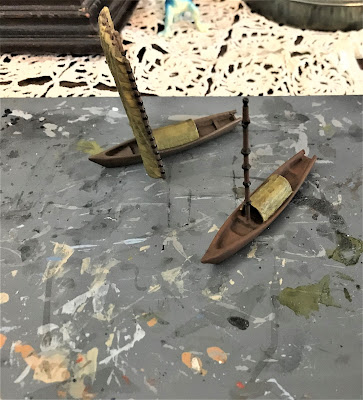 And here's both versions of the sampans with the aft shelters: 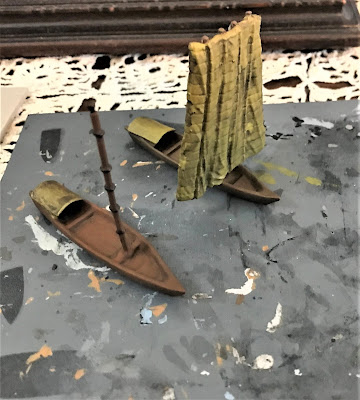 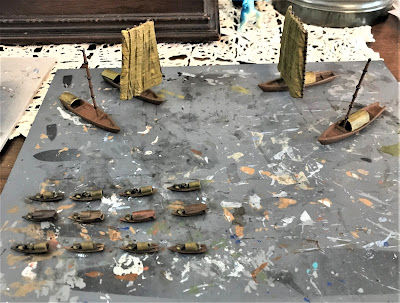 What's also missing in this last photo are the large sampans' deck guns and gun crews.  I glued these on to small cardboard counters and painted them.  I'm attempting to make these boats more versatile by not having the deck guns permanently mounted to them.  We'll see how this works out whenever I get a chance to utilized these models in a game session.
Both the small and large sampans are rather top-heavy and can tip easily.  A good solution to this would be to mount the vessels on a painted base.  However, at this time I'm reluctant to do so because I don't want the bases "cluttering up" any future photographs I may take.
Like the non-permanent deck guns, we'll see how this works out during actual game play.
Note:
During my hasty Google search extensive research on this topic, there seems to be some confusion on the difference between sampans and junks.
Posted by Ted Henkle at 12:30 AM